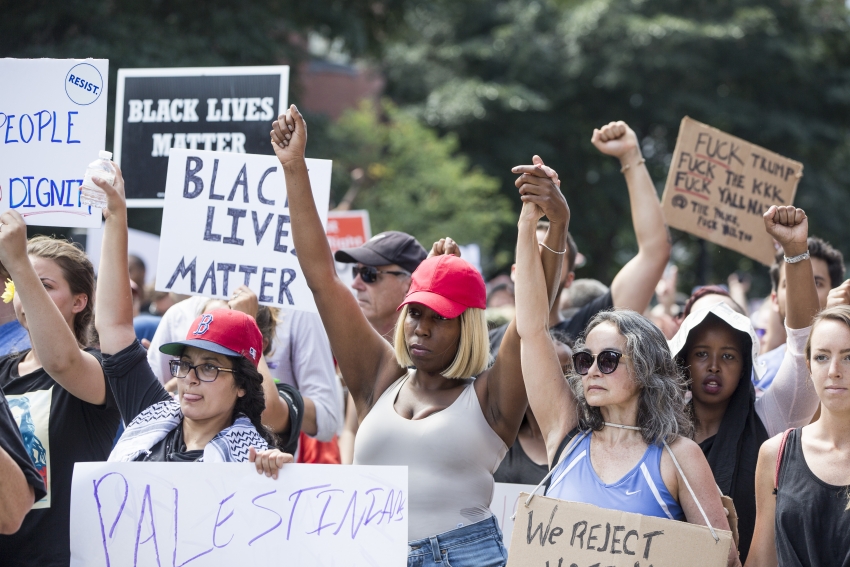 Poor and working people can build power by banding together across racial boundaries and fighting for radical issue and electoral campaigns. (Scott Eisen/Getty Images)

Challenging the “White Ally” Model: To Defeat Racism, We All Need to Dismantle Racial Capitalism

White people must stand alongside us on the front lines.

This month’s white supremacist rally and deadly attack in Charlottesville again reminded millions of white Americans that racism did not, in fact, end with the 2008 election of Barack Obama. In the wake of the recent events in Virginia, there has been lively debate over white people’s proper role in joining in the fight against white supremacy. This is understandable. After all, people of color have reason to question whether those who took so long to acknowledge the existence of racism can be trusted to fight against it.

But white supremacy is a system that does more than just oppress people of color. It serves to divide us and keep poor and working people from building the power necessary to create a more equitable world. We should be wary of calls for white folks to step to the side because they’re not victims of racial prejudice. This approach isn’t just wrong-headed—it lets white people off the hook. They need to fight on the front lines for racial justice alongside the rest of us.

White supremacy has ensured that people of color have suffered the worst oppressions our country has to offer—from the genocide of Native Americans to slavery, Jim Crow, mass incarceration, deportation and the vast racial wealth gap. But white folks have not been spared from America’s ongoing war on the working class, which has been waging since our country’s founding. White Americans continue to face high rates of suicide, poverty, debt, opioid overdoses and alcoholism. While these rates don’t match the disproportionately high levels of suffering among people of color, our shared vision needs to be more than the racially equitable distribution of suffering: All suffering and injustice must come to an end.

Though it has largely remained on the margins of both academia and activism since its inception, racial capitalism—a term initially put forth by Black radical political theorist Cedric J. Robinson in the 1980s—offers a helpful lens for understanding systemic oppression. At its core, this concept holds that racism and colonialism were built into the heart of feudalism and continued to permeate western civilization as it transitioned into capitalism. Rather than operating independently of one another, racial capitalism teaches that economics and racism are inseparable. Capitalism intentionally organizes society through economic inequality and racial divisions, working hand-in-hand with white supremacy to oppress the many while empowering the few.

Under our current system, people of color are oppressed through state violence, poverty and the lack of economic opportunity while they are simultaneously blamed for the precarious position of lower- and middle-class white folks.

By comparison, white people are provided with a variety of “privileges.” From greater access to housing and employment or less abuse at the hands of police and the courts, white people are granted enough of a sense of security and entitlement to feel somewhat invested in the status quo. But we can’t confuse privilege with power. Working-class white people need a better quality of life just as much anyone, but racial capitalism purposefully acts to keep wealthy white people in power.

What of the Traditionalist Workers Party, National Policy Institute and the KKK—all groups that helped organize the Charlottesville white supremacist rally? What makes their followers different from other white people, and why are they so set on organizing and building power to “unite the right”? By and large, members of these groups demographically represent the traditional base of fascism—not just by race and gender, but by class as well. They’re educated middle class straight white men, far from the “white working class” so mythologized in the aftermath of Trump’s election.

Despite coming from some of the safest and most comfortable segments of society, many members of these white supremacist groups occupy a permanently anxious class position between the super wealthy strata they will never be a part of and the poor people they fear will rise up to “replace” them—not just economically, but in a base, existential sense as well. Their lone grounding is the traditions and norms that people like them have benefited from for generations. Queerness, feminism, racial justice and left politics are seen as threats to their entire way of life. And these individuals are among those who have the most to lose and least to gain in a more equal society where capitalism and racism are finally put to bed.

Such an ambitious project may seem far-fetched, but it’s far more coherent than liberal anti-racism’s current trend of white allyship. “Allyship guides” such as the aptly named Guide to Allyship, The Anti-Oppression Network’s multi-part definition of allyship and the Safety Pin Box all exploded in popularity after Black Lives Matter’s inception. While compelling their readers to acknowledge structural racism, these guides fall short of issuing calls to action that would challenge the power structures undergirding racism. They instead primarily emphasize white people’s individual responsibility to unlearn racism and convince others of white supremacy’s existence.

Some who adhere to the white allyship framework hold that a person of color, any person of color, is automatically assumed to be the authority on all matters related to race—so white people need to be quiet and follow their lead. While it makes sense to center the voices of those most-impacted by racial injustice, this directive alone is not enough to build a movement. By emphasizing self-education over concrete action, some brands of white allyship further divide people from different racial backgrounds rather than bringing them together in common purpose.

It is critical to develop an anti-racist praxis rooted in the understanding that our economic system empowers and enriches a small segment of white elites at people of color’s expense—and locks out all working-class people from the decisions that affect their daily lives. Our racist structures and institutions then teach those disenfranchised white, working-class folks to resent people from other racial backgrounds for standing in the way of them reaching the upper echelons of capitalist society.

It’s important to recognize that our movements can—and must—have diverse leadership that trusts one another and grants proper space and respect to varying identities and oppressions. We must not put the burden on people of color—the very people most at risk of state violence, hate crimes and intimidation—to take on all the hazards of leadership, nor leave them to enter the fray by themselves.

Power is built by organizing people to enact their mutual self-interest and organizing money to provide the resources and materials necessary to support such work. Those who have the most barriers to doing either shouldn’t be the only ones expected to take action. We need as many people as possible to take the time, energy and risks involved with publicly intervening against racism and contesting for power.

The prescription offered by a racial capitalist analysis is intuitive by comparison: Poor and working people will win the day through unity and solidarity based on the understanding that an injury to one is an injury to all. We have different experiences, but we’ll all benefit from a world transformed. It should never feel like we’re only fighting for other groups of people but alongside them. Taking power is no easy task, and we need to be doing all we can to dive into deep and trusting organizing relationships with diverse groups of people who all have reasons for showing up. It’s necessary that we get a sense of clarity in our collective self-interest in toppling a system that exploits us all through class and racial inequality.

For many, Charlottesville was yet another wake-up call in a world where a far-right takeover is more than just a looming threat.  People are realizing that the threats we face are intertwined, and we all have much at stake in this moment.

Lancaster Stands Up, a community organization that was created in response to the presidential election—and where I organize—called for a vigil in solidarity with Charlottesville the Saturday following the attack. In a city of 59,000 in the middle of rural Pennsylvania, more than a thousand supporters showed up with less than 12-hours’ notice. But many of them were asking, “What do we do next? What does it even mean to fight white supremacy?”

There is an answer, and it lies in organizing—fighting against, and taking over, the institutions and structures that oppress, impoverish and divide us all. Dismantling the symbols of racial oppression by removing Confederate statues is a good start, but we also need to pivot toward overcoming the everyday racial violence and oppression that remains the reality for the vast majority of people of color.

We can organize our workplaces and communities to collectively build institutional structures and political organizations to fight for issues that couple class struggle and racial liberation. Policies such as universal healthcare, prison abolition and tuition-free higher education would improve lives and severely lessen racial and economic inequity.

We also need to contend for electoral power by running candidates from our movements who share our values and are beholden to our interests. Winning power through the ballot box would allow us to advance policies that directly benefit communities of color.

Poor and working people can build power by banding together across racial boundaries and fighting for radical issue and electoral campaigns. This is not only how we can chip away at racial capitalism, it’s how we can tear it down—and replace it with a just and democratic system that works for all of us.

This work has already begun. Reclaim Philadelphia, a community organization that primarily works on issue campaigns such as workers’ rights and progressive tax reform, knocked 60,000 doors in support of newly-elected District Attorney Larry Krasner who has pledged to use his power to help end mass incarceration in the city. The progressive organization Michigan United is fighting for statewide universal family care while developing and supporting diverse electoral candidates through its movement politics program. These are but a sample of the many cross-racial campaigns fighting systemic racism.

We need to treat the workings of racial capitalism with the utmost seriousness and understand the costs of division and inaction. This will require building a united front of working class people of diverse backgrounds and experiences who will stop at nothing to turn visionary goals into a reality.

Rafael Diaz is a lifelong Pennsylvanian and organizes in Lancaster and York counties for Keystone Progress, Student Action and Lancaster Stands Up.