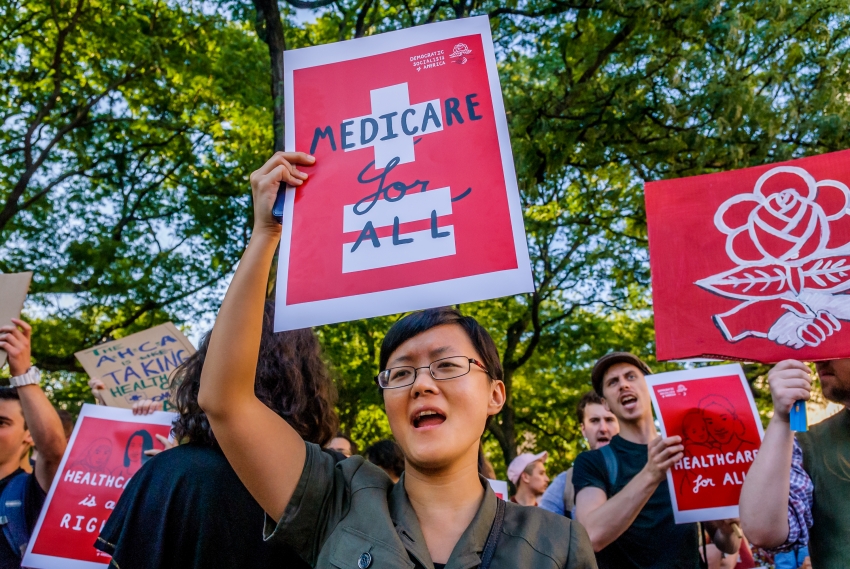 Sanders and other advocates have chosen a side in a battle that affects much more than just healthcare. (Erik McGregor/Pacific Press/LightRocket via Getty Images)

In a Seismic Shift to the Left, Medicare for All Is Emerging as the New Democratic Party Consensus

The historic support for Bernie Sanders’ healthcare bill shows that single payer is becoming mainstream—with or without support of the party establishment.

Leading Democrats are now on the record backing revolutionary change in the American healthcare system that would remove both the private insurance industry and financial barriers to accessing care—finally enshrining healthcare as a right.

A new political consensus is forming around an idea that as recently as last year seemed anathema to mainstream Democratic officials. Democrats at all levels of power now face the choice of joining the chorus demanding universal, decommodified healthcare, or being left behind.

Single payer’s rapid growth in institutional support is a testament to the dedicated work of single-payer advocates across the country who’ve organized in the face of a GOP-led government that would rather strip health insurance from millions of Americans.

Sanders has used his newfound leadership position in the Democratic Party to coalesce party leaders and up-and-comers in the Senate around an issue that was a centerpiece of his 2016 presidential campaign—one that Hillary Clinton infamously said would “never, ever come to pass.”

In addition to longtime vocal single payer supporters such as Jeff Merkley and Brian Schatz, the bill’s sponsors also include Cory Booker, Kamala Harris, Kristen Gillibrand, Al Franken and Elizabeth Warren—all figures with growing popularity in the party who are frequently floated as potential 2020 presidential contenders.

The bill is also sponsored by Wisconsin’s Tammy Baldwin who represents a state that went for Bernie Sanders in the primary but flipped red in the general to go narrowly for Donald Trump. Even former Montana Sen. Max Baucus who is credited with cratering the single-payer push during Obamacare negotiations in 2010 now says of single payer, “It’s going to happen.”

So how did the tide turn in support of single-payer? Sanders didn’t hit some wonkish policy sweet spot where the numbers finally added up and the technocrats gave their seal of approval. Rather, over the course of Sanders’ presidential run and throughout the recent GOP-led efforts to overturn Obamacare, public support for a Medicare for All system didn’t just grow—it translated into real political pressure.

Sanders championed single payer every chance he got throughout the primary—on TV appearances and at his mass rallies. This past spring and summer, congressional town halls were jam-packed with constituents demanding a health insurance system that would provide them with the care and the drugs they need to survive without driving them into bankruptcy.

Groups such as National Nurses United, Physicians for a National Health Program, Healthcare Now!, Our Revolution, Justice Democrats and the Democratic Socialists of America energized their membership to knock doors, petition representatives and build public support behind single-payer.

Meanwhile, advocates for single payer have followed Sanders’ lead in making the moral case for a universal healthcare system in the United States. Rather than focusing on the need to bring down healthcare costs to cut the deficit, supporters have rejected the vocabulary of austerity and instead called upon the need for a humane and just system that doesn’t discriminate based on economic stature.

The approach was on full display during a MSNBC-hosted town hall event with Sanders in McDowell County, W.Va., in March. McDowell, a former mining community, is one of the poorest areas in the state and was won by Donald Trump in 2016 with 75 percent of the vote.

Speaking to a crowd of McDowell residents and Phil, a former coal miner who voted for Trump, Sanders said:

“What I am going to tell you is not utopian, it’s not crazy, it is real. For a start, healthcare must be a right of all people, workers and retirees.

Phil replied: “Yeah. I think every American citizen should have healthcare.”

It turns out that Phil is not alone. This strategy of making the moral case for universal healthcare has paid off. Polls show Americans increasingly support a Medicare for All system. A recent Kaiser poll put public backing at 57 percent. And in an April Economist/YouGov poll, 60 percent said they want to “expand Medicare to provide health insurance to every American.”

As the widespread support for Sanders’ bill shows, this message is beginning to make its way into the halls of power in the Democratic Party. Leading Democrats are now on the record backing revolutionary change in the American healthcare system that would remove both the private insurance industry and financial barriers to accessing care—finally enshrining healthcare as a right.

But this does not mean that Medicare for All won’t face stark opposition from forces inside the Democratic establishment. It’s notable that members of party leadership—Chuck Schumer, Nancy Pelosi and Steny Hoyer—have all refused to publicly back Sanders’ bill, as has Democratic National Committee Chair Tom Perez.

These and other Democrats may be wary of signing onto a program that Republicans could for once accurately attack as socialized health insurance.

Yet in opposing Medicare for All, these Democrats will be siding with the insurance industry, pharmaceutical companies and Wall Street investors that benefit from the current system—a system which leaves tens of millions of Americans without insurance while filling corporate coffers with billions in profits.

Sanders, writing in a New York Times op-ed today, said that these opponents of single payer are “on the wrong side of history.”

By building a consensus around Medicare for All, Sanders and other advocates have chosen a side in a battle that affects much more than just healthcare.

On issue after issue, from raising the minimum wage and providing paid family leave to challenging mass incarceration and ending discriminatory housing practices, this fight against corporate interests and the members of Congress who represent those interests will be central to achieving progressive political goals.

It’s heartening to see that a third of the Democrats in the Senate have now signed onto this fight by backing Sanders’ bill. It’s now up to the rest of the Democratic establishment to show which side they are on.