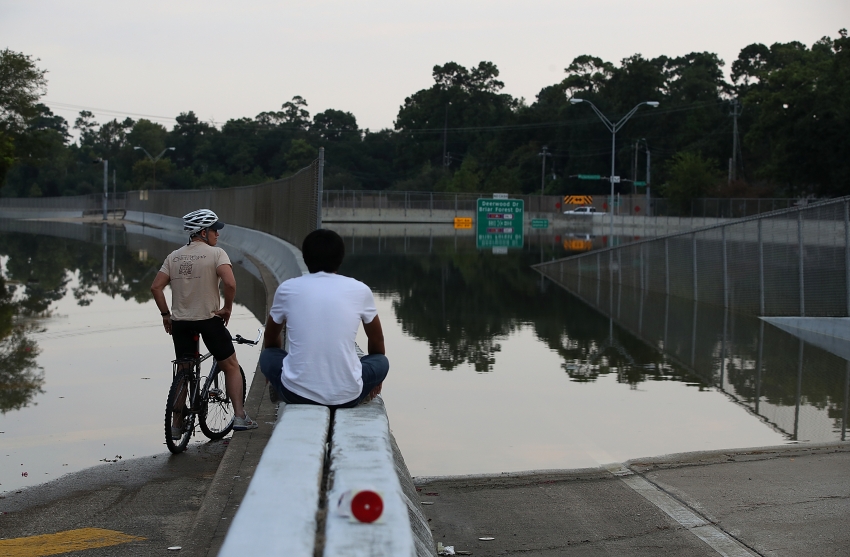 People look at a flooded section of US-90 on September 3, 2017 in Houston, Texas. (Photo by Justin Sullivan/Getty Images)

Leftists to the Rescue: Where the State and Big NGOs Fail, Mutual Aid Networks Step In

In the aftermath of Hurricane Harvey, solidarity-based, grassroots networks are helping Houston residents pick up the pieces.

Organizers and residents shared distrust or disappointment in the government’s ability to provide meaningful relief to marginalized communities. In addition, they expressed skepticism of the efforts of the Red Cross and other large nonprofits.

For Niecee X, this skepticism has roots in her experience providing aid in the aftermath of Hurricane Katrina as a teenager.

“I didn’t know it then, but I learned from what I saw back then to what we’re doing now, why those organizations exist. I believe that they exist because they destroy the type of community that can be built when community members get together,” Niecee told In These Times.

“Everybody is kind of in this semi-communist mode right now,” says Niecee. “From rescuing each other in the initial aftermath of the hurricane, to providing shelter, food, healthcare, and helping to gut houses and rebuild their communities collectively.”

Anarchist scott crow told In These Times, “Disasters reveal the failures of capitalism and governments like nothing else.” The Red Cross isn’t focused on marginalized communities, emphasized crow, who prefers his name be written in lower-case.

“When they do triage to decide where they’re going to go first, they want to get business up and running,” crow continued. “Business as usual: That is the triage. That’s their model.”

“That leaves many people out of the equation,” added crow. “You’re talking about poor people, women, immigrants, undocumented communities, rural communities, prisoners who are actually in prison locked up. These people are at the bottom of the list.”

At the same time, disasters like Harvey reveal “the openings of humanity,” crow said, pushing people to ask, “How we can put aside ideological views for the commonality of humanness? And that is a pretty amazing thing to me.”

“Our focus has been to really provide aid and relief to communities of color, communities that were really hard-hit by the hurricane,” said Niecee X.

“You go down the streets, and you see people’s entire houses out on their curb, sheet rock and all, and Red Cross ain’t nowhere to be found,” Niecee X added. “Red Cross is downtown. Red Cross is in a lot of places that maybe got hit, but they didn’t get hit twice.”

“Being hit twice means I got hit. But I also can’t do anything about it, because I don’t have a back-up income, there’s no savings account,” Niecee X explained. She cited one study that found that single women of color ages 36 to 49 have a median wealth of just $5.

Andrew Kerstenf has been working alongside residents and activists since coming into the Fifth Ward with Black Women’s Defense League as a first responder.

“When we showed up, the only aid that was being given to the community was coming directly from the community,” says Kerstenf. “Our various affiliated organizations plugged in and stood behind them and kind of just followed their lead on it.”

“We raised a bunch of different donations from our network and gave to them,” Kerstenf added. “Then, we got tools and helped them clear out houses, removing personal items that were damaged by flood waters, and removing sheet rock and flooring as well.”

Kerstenf is a member of Houston’s chapter of the anti-capitalist and anti-racist organization Redneck Revolt, which has garnered headlines in recent months for its use of armed self-defense in opposition to white-supremacist groups.

The efforts of organizers in Houston and surrounding areas wouldn’t be effective if they didn’t first earn trust from the community.

“Decentralized efforts, even though they’re smaller-scale, can mobilize very quickly and semi-effectively, even if they don’t know what they’re doing as first-responders, to get people to safety in the first response,” crow insists. He highlighted the work of small autonomous organizations like Food Not Bombs, Bayou Action Street Health (BASH), West Street Recovery and many others.

“People [were not] accepting help from anybody, even people outside, but it’s not because they didn’t want to. They don’t know what’s going on,” Luna said. “It’s just devastating right now.”

The state’s response has led to uneasiness from residents. Luna underscored that many people in East Houston may be undocumented and concerned with deportation, or do not view the police as a benevolent force.

“They see police wandering around and just checking everything,” Luna said.

The entire city of Houston was still under curfew at the time of these interviews. The curfew has since been lifted in a majority of the city, except for one area that faces “ongoing flooding,” according to the Houston Chronicle. While Police Chief Art Acevedo stated the curfew was an attempt to stop “small scale looting,” Andrew Kerstenf had a different perspective.

Kerstenf described these state-imposed conditions as a “war on the working class,” explaining that residents and outside organizers are doing “all this labor all day, working to clear these homes, and then can’t even get a bite to eat at the end of the day.”

Niecee X also expressed concern about the amount of police and military present in the relief efforts. “There’s something very interesting happening right now. They’ve allowed every police department from every county in Texas to come to Houston,” she said.

“You can’t go around a corner without seeing several police cars. It’s almost like there’s an occupation.”

Niecee’s concerns extend to the shelters, many of which are operated in coordination with the Red Cross. The George R. Brown Convention Center has military service members present, according to Neiecee, who says she saw them firsthand.

The Red Cross and FEMA have both publicly stated that undocumented people should seek shelter and that they will not be targeted by ICE or for deportation. “If federal, state or local authorities make a request to enter a shelter for the purpose of looking for undocumented shelter residents, the Red Cross will not grant them permission to enter unless presented with a subpoena or court order,” Greta Gustafson, a spokesperson for the Red Cross, told In These Times.

However, critics warn that, whenever law enforcement is present, undocumented people are at risk—and deterred from seeking help in the first place. Undocumented people are “terrified to seek any assistance,” explains crow. “What happens is that, if everything is destroyed, they’re not going to reach out to get support for that—from FEMA or the Red Cross or from military or the police. They’re very much more reticent for that.”

“There are areas in Houston where the demographics are primarily Latino and Black, and in those areas, we’ve seen immense shows of solidarity that I’m just really proud about. It’s from some of the left organizations that are doing the work. But the communities themselves, they just instantly knew [what to do],” Niecee X said.

“There was a lady that I talked to last night, and she was saying that didn’t have a house before, that she was staying in a truck,” Niecee X said. “She was saying that she’s never ever experienced anybody asking was she okay, does she need anything, like that.”

“It shouldn’t take a hurricane for people to care about people,” Niecee X continued. “So, we want to create some institutions that allow folks to get the help that they need without there being a disaster involved—something that is run and owned by the community.”

crow’s experience with the New Orleans Common Ground collective, which focused on providing solidarity-based mutual aid in the aftermath of Hurricane Katrina, suggests that the window to create these autonomous structures closes, as the commonality created by disaster response fades and people get back to their daily lives. But they can maintain a foothold in a community afterward.

“After Hurricane Katrina, we built multiple clinics,” said crow. “We built seven clinics, in multiple neighborhoods across New Orleans and the Gulf Coast. Now, today, only two of the clinics still exist.”

Having seen this potential realized, however fleetingly, crow still believes in it wholeheartedly. “The idea was that communities could begin to have clinics everywhere, instead of liquor stores or convenience stores,” he said.

Jared Ware is a freelance writer who focuses on leftist organizing and the rights of incarcerated people.