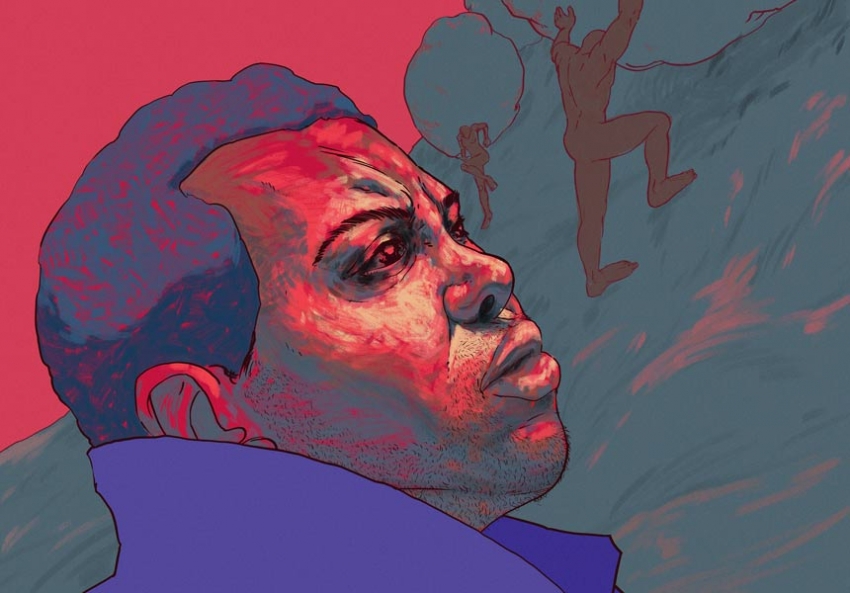 Ta-Nehisi Coates and the Absurdity of Hope

Ta-Nehisi Coates' We Were Eight Years in Power collects eight essays published in The Atlantic over the course of the Obama presidency, along with new introductions designed to provide context, critique and even some correction. The mélange of memoir, essay and reporting fully displays Coates’ talents, positioning him as a sort of bard of the Obama era.

Yet, as readers watch him come into his full powers as a writer, a more subtle transformation unfolds: In America’s racial landscape, Coates finds an insurmountable mountain. The book crystallizes his role as the nation’s most prominent skeptic of racial progress.

He came to that skepticism reluctantly, he writes. Much of this book traces his trajectory from a tepid believer that Barack Obama’s election had made it “possible that white supremacy, the scourge of American history, might well be banished in my lifetime” to one who believes “no one—not our fathers, not our police, and not our gods—is coming to save us. The worst really is possible.”

The book’s title is derived from an 1895 speech by black South Carolina Congressman Thomas Miller lamenting the death of the eight-year Reconstruction-era interracial government. Coates goes on to borrow W.E.B. Du Bois’ explanation for the rejection of Reconstruction: “If there was one thing that South Carolina feared more than bad Negro government, it was good Negro government.” In the book’s epilogue (published in The Atlantic as “The First White President”), Coates extends that quote to account for the backlash to Obama’s presidency and the reactionary election of Trump, all part of this nation’s routine racial choreography: one step toward racial progress, two steps back.

His skepticism shares features with the writings of Derrick Bell, whose 1992 book, Faces At the Bottom of the Well: The Permanence of Racism, argues that racism is indelible. Bell’s analysis helped establish the theoretical framework (and academic discipline) of critical race theory, which holds, among other things, that anti-blackness is not a case of bad behavior by individuals; it’s something deeply rooted in American attitudes and institutions.

But even adherents of critical race theory believe that racial progress is possible through finding points of mutual interest with specific segments of white America. Coates rejects the likelihood of progress. Perhaps his view can best be described as Sisyphean: There’s not much the historically plundered caste of black Americans can do except keep on pushing against the prodigious rock of racism. White supremacy created America and is likely here to stay.

Although Coates was raised in a black nationalist family and nurtured in an environment of skepticism, he was seduced by the progressive visions boosted by a successful mainstream career.

“At the onset of these eight years,” Coates writes, “my own views on what was so often and obscenely called ‘race relations’ were not so different from those of any other liberal.” Coates supported the Keynesian solutions implied by the research of sociologist William Julius Wilson, who argued “that the decline of the kind of industrial high-paying, low-skill jobs that built America’s white middle class had left large numbers of young black men unemployed, and the government made no real effort to ameliorate this shift. An array of unfortunate consequences issued from this shift—family poverty, violent streets, poor schools.” Wilson’s diagnosis led to the “rising tide lifts all boats” and prime-the-pump liberalism that serves as the generalized solution to this problem, and Coates was a tacit subscriber.

In the introduction to his widely heralded 2014 Atlantic essay, “The Case for Reparations,” Coates explains how he developed his current bleak prognosis. Researching the piece led him to conclude that “there would be no happy endings” to America’s racial story. “I believed this because the reparations claim was so old, so transparently correct, so clearly the only solution, and yet it remained far outside the borders of American politics,” he writes.

When Coates first read Randall Robinson’s 2001 pro-reparations book, The Debt, he agreed it made sense, but “like most people who agreed with the idea in principle, I thought it was a wildly impractical solution.” Extensive reading on issues of discrimination in the work of Ira Katznelson and housing policies in Beryl Satter’s research helped Coates refine his growing conviction that white supremacy was a foundational feature of American society and that reparations was “so clearly the only solution.” His pessimism ultimately follows. He believes the primary cause of our racial impasse—the reason the rock keeps on rolling down the hill—is America’s refusal to pay a historical debt, and that it’s twisting itself into destructive knots “trying to stave off a terrible accounting.” And yet, he argues, an America capable of implementing reparations is almost inconceivable.

Many critics take Coates to task for a laser focus on his bête noire of white supremacy. “When you construct an entire teleology on one cause—even a cause as powerful and abiding as white racism— you face the temptation to leave out anything that complicates the thesis,” writes The New Yorker’s George Packer in a letter to The Atlantic, after Coates had criticized a piece Packer wrote on the white working class. “At the heart of American politics there is racism,” Packer agrees. “But it’s not alone–there’s also greed, and broken communities, and partisan hatred, and ignorance.”

A related charge against Coates, often heard in left circles, is that he is too dismissive of class-based structural factors. Charisse Burden-Stelly, professor of Africana studies at Carleton College, critiques Coates for this in a recent edition of Black Agenda Report. “Coates disastrously employs ‘whiteness’ as a type of metaphysics that is neither contextually specific nor historically situated and that defies any grounding in social relations,” she writes.

Coates is justifiably impatient with the Left’s traditional de-emphasis of racial concerns (often dismissed with the slur “identity politics”) and writes scathingly that, to many leftists, “all politics are identity politics—except the politics of white people, the politics of the blood heirloom.” Coates’s views are well-informed by eclectic scholarship, but he’s seen as a dilettante by hardcore black nationalists and ideological leftists.

My gripe with Coates is not that. In fact, I admire his synthesis of influences. My gripe is his dismissal of white supremacy’s impact on black culture. In “Notes from the Sixth Year,” Coates rejects “the idea that something in black culture had gone wrong and was contributing to the panoply of negative outcomes.” Yet, in that very same section he describes what he calls an “I ain’t no punk” ethic that drives so much intra-racial violence, and characterizes it as an adaptation of a powerless people. Those adaptive behaviors are the very evidence of cultural distortions produced by the yoke of white supremacy, to the detriment of the black community.

Coates has been pegged by Jacobin writer R.L. Stephens as an Afro-pessimist, a term coined by writer Frank B. Wilderson III. Coates’ position is indeed concordant with much of Wilderson’s thinking, which holds that slavery was consonant with America’s very reason for being and thus anti-blackness is continuously reinforced. However, Wilderson’s Afro-pessimism is also premised on slavery’s sundering of black culture. Coates will have none of that. What’s more, Coates’ position as a major writer for a prominent journal of the thinking class offers a nod (even if inadvertent) to positive possibilities. The very acclaim his writing receives argues against his pessimism, though he might argue that this allows readers to feel they are doing their part for racial progress from their armchairs.

Coates concludes that reparations are the way out, but he doubts that America can transform itself enough to prescribe, much less implement, a serious solution to its racial problems and, thus, its own salvation. The fluid lucidity of Coates’ prose style, a blend of prosaic detail and poetic allusions with a hiphop flow, has justifiably been likened to James Baldwin, but his ideas ring of the absurdist tones of Albert Camus.