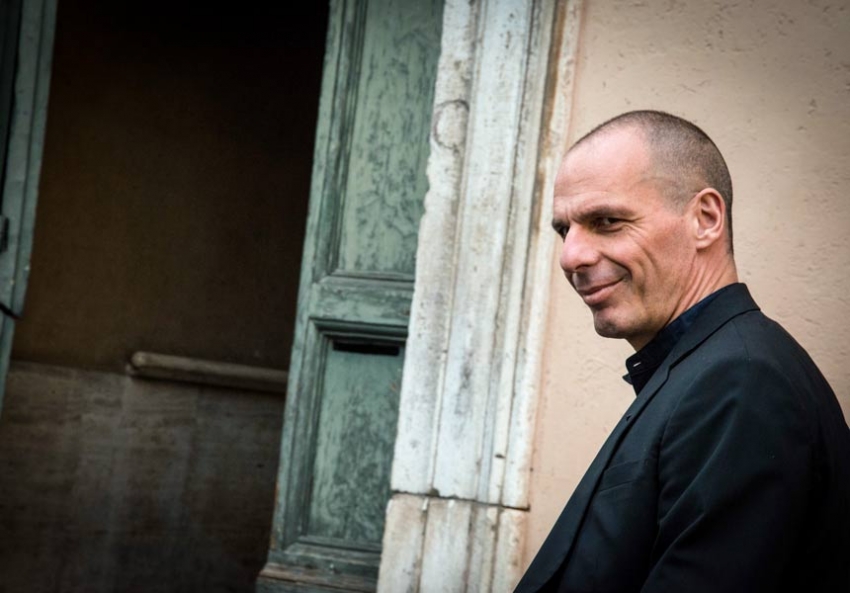 Greece’s former finance minister and “inconsistent Marxist” discusses his new tell-all from his time in Europe’s halls of austerity.

In 2015, the left-wing Greek party Syriza surged to victory with promises of a radical renegotiation of Greece’s debts and an end to austerity. The man tasked with leading those negotiations was new finance minister Yanis Varoufakis, who only months before had been an academic—a professor of economics at the University of Texas at Austin. Varoufakis quickly made a name for himself by clashing with European leaders of the so-called troika (the European Commission, the International Monetary Fund and the European Central Bank) and riding his motorcycle to meetings.

The negotiations were not a success. European leaders insisted that Greece continue to cut pensions, food and medical care in order to pay back the very banks responsible for the financial crisis. Prime Minister Alexis Tsipras eventually signed a deal tying Greece to a future of painful austerity and ongoing debt payments. By that time, Varoufakis had resigned.

Varoufakis’ new memoir, Adults in the Room: My Battle with the European and American Deep Establishment, is an account of those negotiations. He seeks to expose the system of elite control he blames for the economic nightmare wrought on countries like Greece. The memoir will be controversial for those who follow Greek politics: This history is not distant enough for questions of blame to be settled, and Varoufakis is very much the hero of his own story. Even so, the book offers a rare and valuable glimpse behind doors European leaders would prefer kept closed. Varoufakis spoke with In These Times by telephone from Greece.

When Syriza restarted negotiations, it was pretty clear from talking to any economist what the troika was asking for was literally impossible nonsense. You can’t increase GDP or stimulate growth without investment. What do you think underlies that illogic?

The beauty of those five months in government was, for the first time in my life as an academic, I did not have to theorize. Because they told me. People like the head of the International Monetary Fund, Christine Lagarde, and [U.S. Treasury Secretary] Jack Lew and German finance minister [Wolfgang Schäuble], people who understood all this, were coming to me and asking me to adopt a policy which they were telling me was not going to work.

How did we get to that? This I suspect is the essence of your question. Because Thatcher, Reagan, those neoliberals, they really thought trickle-down would work. They were wrong, but they believed it. Whereas the people I was dealing with were telling me in private that they didn’t believe it, but they were locked in.

The answer is 2008. The world of finance collapsed under their feet. They had not seen it coming. Hank Paulson, Tim Geithner, Larry Summers, they had not seen it coming. And they started making it up as they were going along. What I call the “deep establishment,” in a state of panic, rushed in to save the bankers, by any means possible, and to shift most of the costs of the collapse of financialization onto the shoulders of the weakest, our citizens. The Obama administration, by the way, despite the fine rhetoric of its leader, was very guilty of that. Instead of delivering a New Deal, it was a new deal for bankers, while the masses languished in permanently depressed labor markets.

So in Europe, they committed one crime, and like in Macbeth, they had to commit another crime to cover up the first crime. After they saved the banks in France and Germany by giving the insolvent Greek state the largest loan in history—which is crazy—they say oops. The Greek government cannot repay the loan, so they had to give a second loan, but in order to pass it through their parliaments, they had to blame the failure of the first loan on the Greeks. All they were doing is covering the first crime. Then, of course, they end up with a crisis which is unmanageable. And then, like Tacitus once said, “They make a desert and call it peace.” Greece became a desert.

At what point did you decide to quit?

When Christine Lagarde tells you, “You’re completely right, now you’ve got to submit,” what is there for me to add, except that I’m not going to submit? They’re like the Borg: Resistance is futile.

In your book, you suggest that their behavior toward Greece triggered Brexit.

Yes, I believe it did. The neoliberalism of Ronald Reagan and Margaret Thatcher in the ’80s was a political project of gaining legitimacy through appealing to Reagan Democrats, the workers, and trying to convince them of the trickle-down effect. In the state of panic in 2008, the powers that be weren’t even interested in that. Brute force became the order of the day. We moved to what I call “militant liberalism,” or a liberal, grossly authoritarian and incompetent establishment. Particularly in Europe, beginning in Greece, we have this complete disregard for even keeping up appearances of liberal democracy.

I campaigned all over Britain against Brexit, and I was privy to the way in which our treatment by the troika, by the Eurogroup, by the European Union, put off a lot of people, primarily Labour supporters in working-class areas, who said, “Look, we’ve been discarded now for 20 to 25 years anyway, by London, by the establishment, by everyone. But at least we’re holding on to the hope that we still have democracy. And what these guys did to you is unacceptable. We cannot vote to stay in this E.U.”

What did you tell them in response?

The slogan that I used was “in and against”: in the E.U., against this E.U. The reason I had sway is because no one can take me seriously as a lap dog of Brussels, given that I had really felt the brunt of the authoritarian incompetence of Brussels, and of Frankfurt, and of Berlin. Now, as a very young person, I was in every demonstration against the entry of Greece into the European Common Market. And as a not-so-young person in the late 1990s, I was again campaigning against Greece’s entry into the Eurozone. But there is profound difference between saying we should not have gotten in and saying we should get out.

It’s a bit like Indiana Jones running over a bridge. The bridge is crumbling behind him and if he tries to reverse his path, he’s not going to end up where he was, he’s going to fall off a cliff. If the European Union disintegrates, we’re not going back to cozy little democratic nation-states. We’re going to create the circumstances for a Great Depression. Imagine if the Euro were to break down tomorrow. The deutsche mark is going to go through the roof, and this increase is going to cause mass unemployment. That’s the beginning of very nasty political repercussions—people even worse than Trump, without the checks and balances of the American Constitution.

So what I say to my comrades on the Left is: Beware what you wish for. This is why we’re going for the project of democratization.

This is the slogan of your current movement, Democracy in Europe 2025, right?

Yes. “The E.U. will democratize or it will disintegrate.” Now, is it feasible? In truth, I really don’t know. At the same time, I don’t care. Because I believe an attempt to create a movement that is pan-European, transnational, genuinely anti-nationalist, in order to democratize the European Union, in itself is going to bring together all those people in Europe who will stem the rise of the various Trumps, Le Pens, and neofascists. If we succeed, good. If we fail, good. Because at least we’ll be together.

When Syriza won, there was a big tent and there was a representative from every left party all singing together. It was a beautiful scene. Is that sort of traditional left internationalism what you’re talking about?

I was in that tent, extremely happy and joyful. But you see, you and I were not the only ones watching this. Schäuble and the troika were watching, because they were so bloody determined to crush us.

What you described, a coalition of left-wing parties, was a confederacy. We had very little to do with each other except good feelings. We loved Podemos, Podemos loved us. Did we have a policy for Europe? No.

This is the conundrum of the Left generally. We talk about internationalism, workers of the world unite, and all that. But we’re not united. Capital is. The troika is. They have an internationalist view, a globalized view, which is to crush anyone who opposes them anywhere, with remarkable solidarity amongst themselves.

Even more important is that the main problems we face are a little bit like climate change. A common problem which requires local action and a global, internationalist approach. Investment cannot be boosted in one country, but it can be boosted throughout Europe. So not only is it important that we are more united, but also that we have a common policy.

I think of what you’re describing post-financial crisis as a form of class war, of extraction: poor people paying into these foreign banks.

I’m a Marxist. An inconsistent Marxist, because I believe the only way of being truly dialectical and true to Marx is to be inconsistent. Given that I’m a Marxist, of course I agree with you. But we of the Left have to come to terms with the fact that our language, which is fine language, puts people off. We lost the game in 1991. The language of the Left became wooden and unwieldy and particularly unappealing to most people once the Soviet Union came down. If I wrote my book in terms of class war, capital accumulation, capitalism, people would simply switch off. And I think we have a duty as leftists: If our mallet doesn’t work, change our mallet.

This was definitely what was successful about Bernie Sanders in the U. S. (who I was amused to see was the first American politician to call you when you took office).

I have another book coming out soon in the United States in May, which has the subtitle “a brief history of capitalism.” I make a point in it of not using the word capitalism once.

What future do you see for Greece?

If we stay on the present course, we are going to become a Kosovo on the Mediterranean. It’s a protectorate run by a commissioner of some prefect from the European Union. There’s no industry and the only export is young people. We’re also going to become the Miami of Europe in the sense that we’ll be colonized by very large-scale hotels and old folks’ homes, while the Greeks living here eat out of dustbins, garbage bins. Greece cannot free itself from this fate unless we liberate Europe from its fate.

Sarah Leonard is features editor at The Nation and editor-at-large at Dissent. She is co-editor of The Future We Want: Radical Ideas for the New Century.