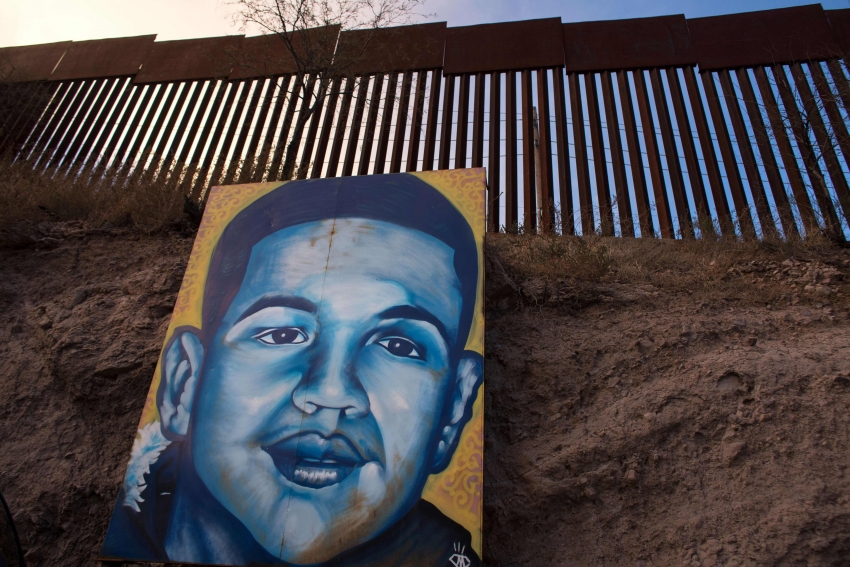 A portrait of Jose Antonio Elena Rodriguez, a 16-year-old shot by a Border Patrol agent, is seen on the U.S.-Mexico border fence on February 16, 2017. (GUILLERMO ARIAS/AFP/Getty Images)

A Cyclical Crisis: Why Trump’s Crackdown on Central American Migrants Will Only Mean More Violence

Trump’s promises to “decimate” Central American gangs and close the border to child migrants fuel a cycle of transnational brutality.

“Hempstead is a shithole full of pandilleros (thieves), just like Tegucigalpa.” These words from Manú López, a 17-year old from Honduras, describe his experience relocating to Hempstead, New York from the Honduran capital of Tegucigalpa, after gang members murdered his brother. The quote comes from an interview with López by Valeria Luiselli, whose book Tell Me How It Ends: An Essay in Forty Questions (Coffee House Press, 2017), details her experience as a volunteer interpreter for Central American youth seeking asylum.

López’s description of gang violence in Hempstead speaks to a perversely tragic situation: in some cases, individuals like López flee brutality in their home countries only to face similar threats when they arrive in the United States.

President Trump referenced the threats posed by Central American gang members during a speech in Long Island this July, in which he promised all-out war against the Mara Salvatrucha (MS-13) gang, whose members perpetrated 17 murders between January 2016 and July 2017 in Suffolk County, Long Island. Recent reports also claim that Trump plans to push for a further crackdown on Central American migrants as part of an agreement offering protection to DACA recipients who face deportation.

Rather than offering solutions to the systemic crises driving gang violence in communities like Hempstead, Trump’s Long Island speech instead offered inflammatory rhetoric and bald falsehoods. He advocated extralegal brutality and repeatedly referred to gang members as “animals.” The speech inaccurately blamed the influx of Central American asylum seekers who arrived at the U.S.-Mexico border in the summer of 2014 for an unproven rise in gang violence. In fact, individuals like López typically fled their home countries for the United States in order to avoid gang violence.

Trump’s rhetoric stands in stark contrast to Luiselli’s approach, which investigates the cyclical, transnational and historically-rooted nature of this brutality.

When Luiselli meets López, he’s missing two front teeth after getting beat up by members of Barrio-18, MS-13’s rival, at Hempstead High School. MS-13 members came to his defense. As a result, López is worried he’ll be forced to join MS-13—one of the reasons he left Honduras in the first place. It’s situations like this that have led other children Luiselli meets to describe their journeys as “from Guatemala to Guatepeor,” roughly translating to, “From Guate-bad to Guate-worse.”

The presence of the MS-13 and Barrio-18 on Long Island and in Nassau County, home to the fifth highest number of unaccompanied minors in the country, compounds an already heart-wrenching situation. Luiselli, herself an immigrant from Mexico, writes, “Why did we risk our lives to come to this country? Why did they come when, as if in some circular nightmare, they arrive in new schools… and find there the very things they were running from?”

Luiselli’s account is informed by her experience working as an interpreter for The Door, a New York-based nonprofit that offers immigration assistance to youth. Law firms often partner with organizations such as Luiselli’s to take on immigration cases.

These groups struggled to keep up with the number of asylum applications they received in the wake of the child migrant crisis of 2014—long predating Trump’s presidency. In the summer of 2014, 80,000 unaccompanied children, officially referred to as unaccompanied alien minors, or UAMs, turned themselves in to Border Patrol at the U.S.-Mexico border, seeking asylum. They were then packed into ice-cold jail cells referred to as “hieleras” (freezers) as they awaited their court dates, sometimes for months.

Luiselli recounts the conditions these migrants faced in custody—one girl she interviews says she was unable to eat the frozen sandwiches she was served at a detention center because they gave her “belly-sadness.” In another case, the Dilley Detention Center in South Texas improperly administered adult-sized doses of the Hepatitis-A vaccine to 250 children, allegedly leading to severe illness requiring hospitalization.

As Luiselli explains, the Obama administration responded to this crisis by moving minors’ names to the priority deportation docket, reducing the time these children would have to build a case for themselves to stay in the country from 12 months to just 21 days.

An already under-resourced pro-bono immigrant lawyer network quickly mobilized to represent as many cases as they could. Spanish-English translators, including Luiselli, stepped up to help conduct fear interviews—a series of questions that help determine if applicants have credible claims of facing persecution if returned to their home countries. Based on these interviews, lawyers would take the cases they believed had the highest chances of winning. “If their answers didn't align with what the law considers reason enough for their right to protection, the only possible ending to their story was going to be deportation,” Luiselli writes.

Legally, unlike U.S. citizens, immigrants are not provided court-appointed lawyers. According to the Transactional Records Clearinghouse at Syracuse University, nearly half of children who do have lawyers are allowed to stay in the United States, while nine in ten children without legal representation receive deportation orders.

For his part, President Trump asserted on July 28 that “the previous administration enacted an open-door policy to illegal migrants from Central America.” Luiselli’s book—an empathetic, personal, and rightfully indignant account of the asylum-seeking process—describes how these migrants have faced anything but an open door.

Over the last two years, MS-13 has murdered more than 20 people on Long Island. In September 2016, two teenage girls from Brentwood, Kayla Cuevas, 16, and Nisa Micks, 15, were beaten to death. These deaths may have been what Trump was referring to when he said, “They [MS-13] butcher those little girls. They kidnap, they extort, they rape and they rob. They prey on children. They shouldn’t be here.” What Trump didn’t mention is that these gangs tend to target the very Central American immigrants that he wants to deport.

And despite international laws prohibiting the deportation of people who face a credible threat of persecution in their home country, according to the Guardian, in 2014 at least 83 people were deported from the United States to subsequently face death in Central America. Our legal system has set forth barrier after barrier for potential asylum-seekers, making them fear reporting crimes or even serving as witnesses. Trump’s crackdown would increase these kinds of fears, potentially making the MS-13 even bolder and more brutal as their victims would be less likely to report attacks to law enforcement out of fear of being criminalized, detained or deported.

President Trump said in his Long Island speech that “it is the policy of this administration to dismantle, decimate and eradicate MS-13… And they were all let in here over a relatively short period of time. Not during my period of time, believe me. But we're getting them out. They're going to jails, and then they're going back to their country.”

In fact, the MS-13 and Barrio-18 have their roots in 1980s Los Angeles, where many Salvadorans moved to flee violence during their country’s civil war— funded in part by the U.S. government under President Ronald Reagan. As Luiselli explains, these gangs were originally founded by second-generation Salvadoran-Americans to protect themselves from larger, longstanding gangs in impoverished areas of Los Angeles.

After the passage of the Illegal Immigration Reform and Immigrant Responsibility Act (IIRIA) in 1996, massive numbers of Central Americans were deported. Facing severe inequality, lack of economic opportunity and weak governments in their home countries, these deported gang members deepened their foothold in the northern triangle countries of Central America—El Salvador, Guatemala and Honduras—while increasing their brutality. “The policies backfired,” Luiselli writes. “Gang deportations became more of a metastasis than an early eradication.”

The governments of El Salvador and Honduras responded much in the same way Trump now proposes: taking the gangs down. Subsequent right-wing governments in these countries advocated a strategy of mano dura (hard-fistedness), resulting in mass arrests, repression and mass incarceration. Rather than solving the gang problem, these policies have emboldened and contributed to the growing ranks and increasing brutality of gang members, compelling the current migratory exodus.

Luiselli explains the transnational character of this crisis: “Until all the governments involved… at least- acknowledge their shared accountability in the roots and causes of the children's exodus, solutions to the crisis will be impossible,” she writes.

Breaking the cycle of violence

Trump’s vague, hard-fisted rhetoric isn’t just racist, his proposals would make matters worse. For already marginalized youth growing up in poor countries, leaving can seem like the only option. Once they arrive, the journey is far from over, and the U.S. legal system presents an uphill battle. Absent any kind of support network, joining a gang can seem like the only route to protection, especially in a place like Hempstead High School.

Trump’s Long Island speech used gang violence by Central Americans as a justification for his administration’s anti-immigrant policies. He advocated military force and presumption of guilt before innocence, while dehumanizing immigrant communities and encouraging police brutality. By using his platform to justify this type of response, he further engrains the modus operandi of repression and violence as the only approach to solving conflict. These messages spread falsehoods and deepen insecurities, while seemingly justifying violent responses that would do nothing to protect those who need it most.

It is in line with these kinds of messages that the Trump administrations plans to halve the number of refugees the United States will accept into the country over the next year—while the UN Refugee Agency says that needs for refugee resettlement have never been greater.

Speaking at an event at Judson Church in New York last month, Luiselli said the “extreme violence of language” the media uses to describe immigrants has normalized their dehumanization. She wrote her book in the hope that it would help reshape the language and mentality around immigration.

If Tell Me How It Ends teaches us anything, it’s that violence only begets more violence, and that as it becomes increasingly engrained, this violence—regardless of borders—becomes all the more difficult to escape.

Laura Weiss is Managing Editor at NACLA Report on the Americas. She has a Master’s degree in Latin American and Caribbean Studies from NYU.