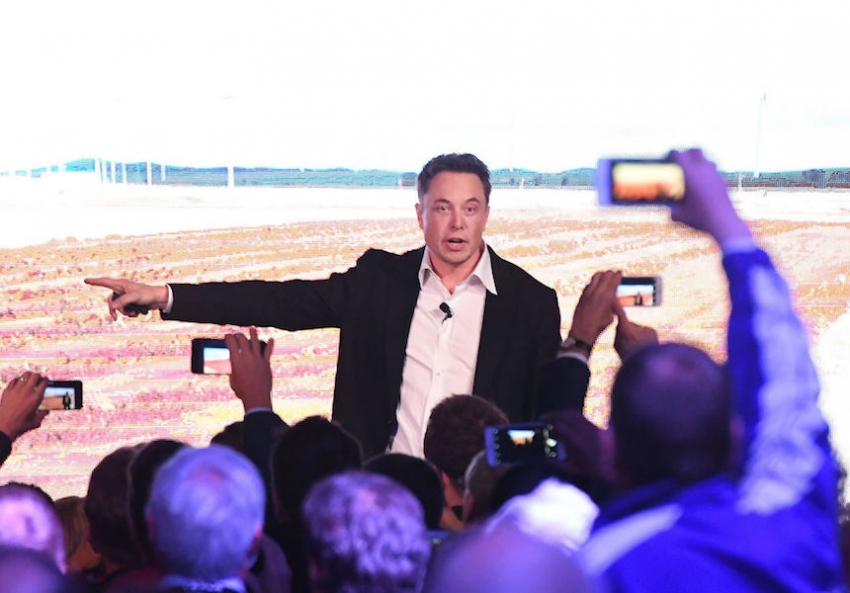 Elon Musk Is Not the Hero Puerto Rico Needs

The island needs a revamped electric grid and fast, but privatization is not the answer.

Privatization talks picked up after the island’s brush with Irma, and still more voices from outside the island have joined the call for privatization in Maria’s wake.

In what might be considered the world’s greenest bromance, Puerto Rican Gov. Ricardo Rossello and clean energy wunderkind Elon Musk have been exchanging kind words on Twitter in the last few days. According to a tweet from the governor late last week, the two are now in talks about bringing renewable energy from Musk’s Tesla and SolarCity operations to the island, whose long-embattled public utility—the Puerto Rico Electric Power Authority (PREPA)—was decimated by Hurricane Maria.

On the one hand, the talks can be seen as a positive development: More than 80 percent of the island remains without power, and the storm could be a once-in-a-lifetime opportunity for Puerto Rico to get back online and become a leader in the transition away from fossil fuels. But the budding friendship between Rossello and Musk is also taking place in the context of a massive attempt to privatize Puerto Rico’s electric utility. Musk’s companies could deliver tangible improvements to Puerto Rico’s grid, but they could also prime the pump for a corporate takeover of the United States’ largest public power provider, putting decisions like who gets power and how much it costs into the hands of corporate shareholders.

Beyond questions of ownership, there are logistical concerns that should cast some doubt on the potential deal. “The Tesla team has done this for many smaller islands around the world,” Musk tweeted, “it can be done for Puerto Rico too.” This isn’t exactly true. As Slate’s Eleanor Cummins points out, Tesla’s work on the American Samoa island of Ta’u serves less than 1,000 residents, and similar projects have powered other similarly small islands, luxury resorts and breweries. The population of Puerto Rico is 3.4 million, and where Ta’u had a mostly functional grid before, Puerto Rico’s has been all but leveled by both Maria and decades of disinvestment.

One of Tesla’s largest island power projects—on the also-tiny Hawaiian island of Kauai, population 72,000—may offer a better precedent. For island utilities, making the switch to solar and wind makes even more economic sense than it would on the mainland. Most are inordinately dependent on costly imported oil, leaving Hawaii and Puerto Rico with some of the highest electricity costs in the United States and its territories. What they also have in common is plenty of sunshine, which translates into near-optimum conditions for solar. Yet despite the rapid growth of renewables worldwide in the last several years, several technical and economic barriers remain to a massive switchover. Among the biggest is storage, which is part of what led the Kauai Island Utility Cooperative (KIUC) to team up with Tesla to bring the company’s potentially revolutionary solar panel and battery systems to a scale large enough to potentially power the entire island.

The island’s official goal is to source 50 percent of its electricity from renewables by 2023. It’s likely now that Kauai will hit that goal ahead of schedule, employing a 55,000-solar-panel farm with nearly 300 utility-scale Powerpack batteries, which allow excess solar power to be used at a later date. KIUC now expects to hit its initial 2023 goal by 2018, and has now upped its target for 2023 to 70 percent renewable generation. If this current success continues, it could be a model not just for bringing solar to utility scale, generally defined as the capacity to generate 10 megawatts of power or more—it could also show what an at least somewhat equitable and democratic public-private partnership could look like. At a time when renewable production and technology is almost entirely dominated by the private sector, such deals will likely be an inevitable part of getting off fossil fuels within the short timeline physics has laid out.

But what’s so different about what happened on Kauai and what Musk is likely to do in Puerto Rico? The KIUC is a rural electric cooperative, owned and operated by its members. KIUC’s board voted to use more solar, and the utility’s legal mandate is to provide affordable, reliable power to its members—not profits to shareholders or venture capitalists. That’s a good deal different than what we already know of negotiations between Rossello and Musk, taking place behind closed doors and being reported out piecemeal through Twitter. For now, PREPA carries a similar mandate to serve the public as a public corporation, though privatization could change that. If its operations are broken up and sold off—as one proposal outlined—different pieces of PREPA (or the utility formerly known as PREPA) could be accountable to different sets of shareholders.

Another question is what Tesla’s entry into the island could mean for Puerto Rican workers. PREPA is currently home to one of the island’s most powerful unions, UTIER. Attempts to privatize the utility—or sell pieces of its generation and transmission operations off to different bidders—could see the union broken up entirely. As is already known, Musk is certainly no friend to labor: Tesla’s Fremont, Calif., factory has been at the center of a harsh labor dispute as workers have attempted to secure recognition with the United Auto Workers, reporting near-Dickensian working conditions on the factory floor. One Tesla technician told Guardian reporter Julia Carrie Wong, “I’ve seen people pass out, hit the floor like a pancake and smash their face open.” In response to the union drive, Musk promised workers frozen yogurt.

As UTIER organizers have warned for months, Rossello and the oversight board now controlling Puerto Rico’s finances have been clear about their intention to privatize PREPA, and potentially selling off various aspects of the utility to the highest bidder. Musk’s proposal could be an opportunity to curry public favor for privatization.

Four of the board’s seven members penned a Wall Street Journal op-ed back in June calling explicitly to privatize PREPA in order to “modernize its power supply, depoliticize its management, reform pensions, and renegotiate labor and other contracts to operate more efficiently.” In July, they entered into a six-figure-per-month contract with privatization experts McKinsey & Co. to (among other things) draw up “Detailed privatization/corporatization plans supported by financial models and market engagement.” Privatization talks picked up after the island’s brush with Irma, and still more voices from outside the island have joined the call for privatization in Maria’s wake.

Even former House speaker Newt Gingrich has weighed in with perhaps the most blatant post-Maria disaster capitalist scheme yet, laying out a plan for “replacing rather than repairing old highway, electrical, and water systems” to “maximize economic growth,” suggesting that the Trump administration “integrate private sector and private capital to leverage funds” in Puerto Rico. “Once the system is completed,” he adds, “the administration should grant long-term concessions to the private sector under a payment mechanism to reimburse the federal taxpayers and ensure long-term modernization and performance.” Gingrich may not be the power player he once was in conservative politics, but his proposals are more or less in line with those that have emerged from the oversight board.

As a result of Maria, the board has also invoked Title V of PROMESA, the bill that put the board in charge of the island. That provision gives broad mandate to a board-appointed official, revitalization coordinator Noel Zamot, to solicit and approve public-private partnerships without much public or environmental review, bypassing the island’s regulatory process almost entirely.

There’s a 21st century feel good charm to Musk and Rossello’s back-and-forth—and plenty of substantive good that could come from some kind of partnership between PREPA and Tesla. Yet, as of now, the fledgling deal looks to be fitting into a long-running pattern in Puerto Rico: Of Puerto Ricans having decisions about nearly every aspect of life made for them, without much semblance of democratic participation.