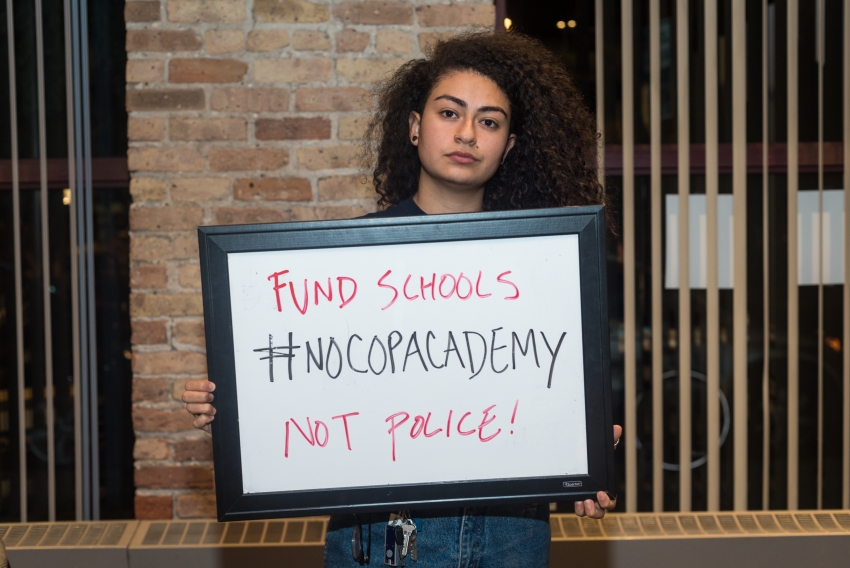 The #NoCopAcademy campaign envisions other uses of funding slated for a new police compound. (Photo by Sarah Jane-Rhee/Love & Struggle photos)

Organizers with the #NoCopAcademy campaign are taking to the phones, streets and trains to get out their message that Chicago communities need more resources, not more cops.

“This is just the latest version of ongoing divestment from communities of color alongside massive resourcing of policing,”

This July, Chicago Mayor Rahm Emanuel announced plans to build a new $95 million training academy for police and fire recruits in the city’s West Garfield Park neighborhood. After being endorsed by the Chicago Plan Commission in September, the sale of city land for the facility is on the verge of approval from the City Council.

While Emanuel has hailed the project as a “much-needed overhaul” for police training, the effort is being met with resistance from a coalition of community activists and organizations who envision alternative uses for the $95 million.

This coalition has launched a campaign called #NoCopAcademy, seeking to redirect the funds to programs aimed at addressing poverty and offering resources such as jobs and education to community residents.

“This is just the latest version of ongoing divestment from communities of color alongside massive resourcing of policing,” reads a public statement on the campaign’s website. “This plan is being praised as a development opportunity to help local residents around the proposed site, but when Rahm closed 50 schools in 2013, six were in this neighborhood. The message is clear: Rahm supports schools and resources for cops, not for Black and Brown kids.”

Many of these organizations have worked together in the past on successful efforts to oppose police brutality, including the #ByeAnita campaign that helped unseat Cook County States Attorney Anita Alvarez; the #SayHerName campaign which helped lead to the resignation of Chicago Police Detective Dante Servin who had been accused of murdering Rekia Boyd; and the fight to win reparations for Jon Burge-era torture survivors.

The coalition plans a broad array of tactics to advance their campaign, including canvassing, political education teach-ins, “takeovers” of public trains, lobbying of alderman and, potentially, civil disobedience.

A mayor under fire

Since his re-election in 2015, Emanuel has been under public fire for his record on policing. The controversy over his alleged cover-up of a video showing Chicago police officer Jason Van Dyke shooting Laquan McDonald 16 times led to a string of protests and calls for the mayor’s resignation. The record-breaking violence in the city has driven affected communities to demand both better public safety and more police accountability. And the Department of Justice’s scathing report on the Chicago Police Department—an agency overseen by the mayor—described a pattern of “racially discriminatory” conduct.

Emanuel’s response to this uproar appears to be investing even more public money into the CPD through this new facility, at a time police already receive over 38 percent of the city’s operating budget. DNAinfo Chicago reports that the training center is specifically designed to address the issues laid out in the DOJ’s report. And for the location, the mayor has chosen a racially segregated neighborhood in economic crisis.

According to the City of Chicago’s Data Portal and 2010 census data, West Garfield Park is 97 percent Black. Over forty percent of the households in the neighborhood are living below the poverty line and a quarter of residents 25 and older do not have a high school diploma.

The neighborhood also has seen its share of police violence. In December 2015, CPD officer Robert Rialmo killed residents Bettie Jones and Quintonio LeGrier in West Garfield Park while Le Grier was undergoing a mental health episode. The State’s Attorney did not charge Rialmo with any crime, and he remains a full-time officer of the CPD making over $84,000 a year.

Rialmo later sued LeGrier’s estate, alleging he suffered trauma after LeGrier missed him with two swings of a baseball bat during the episode. That case is currently pending in Cook County Circuit Court.

Nita, a 19-year old member of Assata’s Daughters, was friends with LeGrier and says his killing shows why the #NoCopAcademy campaign is so important.

“I’ve got involved because I have multiple friends that were killed by police,” says Nita. “When they killed my friend Quintonio, the cop sued Quintonio’s family. I feel like $95 million can go into something way different than police.”

All eyes on city council

If the academy is Emanuel's attempt to mend his reputation on policing, organizers with #NoCopAcademy plan to continue their protests and put the issue in the public eye.

Since the project still requires approval by the full city council, organizers are targeting alderman through phone calls and community engagement while raising the profile of the campaign on social media. And they received one major boost in late September when Chance the Rapper tweeted about #NoCopAcademy to his nearly 6 million followers.

According to the campaign website, the coalition has much more planned for the coming weeks:

“We plan to fight back together—through the media, train takeovers, canvassing, civil disobedience, and by building a front of popular opposition—to stop this compound.”