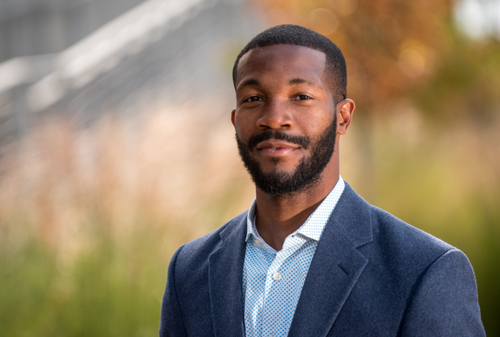 In an exclusive interview, Woodfin discusses his victory, how he plans to redefine progress in Alabama’s biggest city, and how other progressive challengers can win.

"If you want to be successful, the foundation of your campaign should be rooted in the ground. Everything else is a supplement."

On Oct. 3, Randall Woodfin beat two-term incumbent William Bell in a combative runoff election to become the next mayor of Birmingham, Alabama.

Woodfin beat Bell by a staggering 17 points, even winning Bell’s own neighborhood precinct. The 36-year-old challenger ran a year-long campaign that combined tech-savvy communication and data techniques with an old-fashioned grassroots ground game. His campaign team claims it knocked on 50,000 doors and made direct contact with 19,000 people. AL.com political reporter Kyle Whitmire said Woodfin’s campaign was the smartest he’d ever seen in Birmingham politics.

Late in the campaign, Woodfin was backed by national progressive groups including Our Revolution and the Working Families Party, as well as Bernie Sanders.

But his campaign pledges weren’t all in line with a traditional left platform. For example, Woodfin also hopes to expand Birmingham’s police force. In a city where where violent crime is on the rise, Woodfin says his goal is to improve the quality of life for residents in all 99 neighborhoods by directly addressing their concerns, from community safety and job training to police accountability.

In August, I shadowed Woodfin for In These Times during a canvas and saw firsthand his contagious charm, how quickly people seemed calmed by his soft-spoken demeanor, how honest they were with him. Those interactions, he said, built his platform. Now, will those 19,000 people hold him accountable?

When I met Woodfin a week after his victory at a café, he was still in high-five and hug mode, greeting dozens of patrons before we took a seat to talk about how his win is being viewed nationally and what he hopes to accomplish first as mayor.

So, you whooped Bell. Why do you think the margin was so big?

I think we put in the work. We spent our time engaging voters directly. The establishment organizations, all the people with the money, all the people in the know, they spent their time talking to the choir. We went directly to the congregation—the voters. We knocked on their doors. We called their homes. We listened to them and we offered solutions to their issues, and we did that on repeat for a year and six weeks.

After you won, much of the national media was quick to say Bernie Sanders or other national support led to your victory, but they missed the narrative of your grassroots campaign.

Our Revolution supported us in May. We had been running for a year. So, from that standpoint, we put the work in. And I get [that narrative].

Local elections are extremely important in the national context. Issues in 2020, issues in 2018, if they can’t be solved at the national level, then you have to create a bench. That bench is at the local level. We’re looking at a country where the majority of governors are Republican, and so we have to look toward our Democratic mayors for solutions to address the issues that affect people every day.

You have to look at our platform, too. Our platform wasn’t necessarily “center.” It was “lean left.” What we’ve been doing [here in Birmingham] is not working, in terms of actually helping people. I think it’s common sense, pragmatic things we have to do. I don’t call it extreme.

So, there was also this narrative of a far-left progressive running, but the platform you ran on, as you told me in August, came directly out of the mouths of voters you talked to while campaigning.

Consider what we did. Out of 69 precincts, we won 57. That is every generation. That’s boomer, X, Y. That’s black, white. That’s homeowner. That’s renter. That’s public housing. That’s everything in between. We won the entire city: North, South, East, West. It was a sweep. That’s overwhelming.

We didn’t leave one voter group on the table. If you’re defining that as “far left,” if that’s the new definition of far left, oh well. I don’t think it is. I think it’s one of the most people-centered campaigns the city of Birmingham has ever witnessed. It’s one of the most people-centered campaigns the state of Alabama has ever seen. We ended up raising over half a million dollars, $566-thousand and some change from almost 4,000 donations. So it was everything we did, from doors to phone calls to fundraising. It was grassroots, grassroots, grassroots. People, people, people.

I think both. Honestly, it’s both.

We’re so quick to define people by party line politics, but I think most people don’t have candidates who can represent their value system wholly, and they’re just looking for someone who can do the best job.

We had to communicate with people who were given 12 options for mayor. We made our way from 12 down to two. The work we put in was never geared toward what we wanted, but what the voter wanted, what the resident needed.

So, does that make you feel a great deal of responsibility?

What policies will you put in place first to move these things forward?

I think we take an immediate look at transparency. That’s the first thing we do. Whatever issues around nepotism and cronyism exist; ex-ed out. I think the second thing we do is take a look at the strategic initiatives around education and workforce and around community development and crime.

You had huge grassroots support. What about those 19,000 people whose doors you knocked on? Are you putting an expectation on them to participate?

Yes. So far, we’ve been operating under two scenarios. Scenario one: People don’t vote and complain. Scenario two: People vote and then check out and don’t hold anybody accountable. I’m asking those 19,000 people and the 211,000 people who live in our city to exercise a third option: Vote and hold me accountable.

Are there leaders locally or throughout the country who you look to for that type of leadership and that type of integrity?

The new mayor in Jackson, Mississippi, [Chokwe Antar Lumumba]. That brother’s tight. We were endorsed and supported by some of the same people. We’re both from the same generation. I’m a huge fan of Walt Maddox in Tuscaloosa. He fights for the people he represents. He does it with integrity. He does it with a sense of urgency. He does it for all people: black, white, everything in the middle. He’s a people’s mayor.

The Birmingham City Council has pushed forward progressive policies in the past. It’s not necessarily a rarity to have someone here who leans progressive.

I think the rarity is this: No one has seen in Birmingham, the largest city in Alabama, Gen X and Gen Y campaigning with one another the way we have. I think it’s the campaign. It was how we wrapped technology around that grassroots, door to door movement: micro-targeting, the digital piece. I had a lot of young people around me.

What advice do you have for other progressive challengers as they prepare for similar races?

Out-organize your competition. TV and radio are supplements to organization and organizing. If you want to be successful, the foundation of your campaign should be rooted in the ground. Everything else is a supplement.

How will you run your office differently than Bell has?

You’ve talked about how a progressive candidate or a candidate for the people on the local level is a form of national resistance. Can you talk more about that?

It’s the issue of interactions with police and our young boys. It’s issues of fighting food deserts. It’s infrastructure issues that are at the national level. It’s issues with education, with Betsy Devos, the assault on public education.

The front line of these issues, particularly in an urban area, is going to be the mayor’s office. We have budgets that are large enough to make a tangible quality of life improvement for the people we represent.

Katherine Webb-Hehn is a Birmingham-based writer. Her work has appeared in The New York Times, The Bitter Southerner, PANK, Arts & Letters,and elsewhere. Currently, she’s the Alabama Political Reporter for Scalawag Magazine. You can follow her on Twitter @KAWebb_