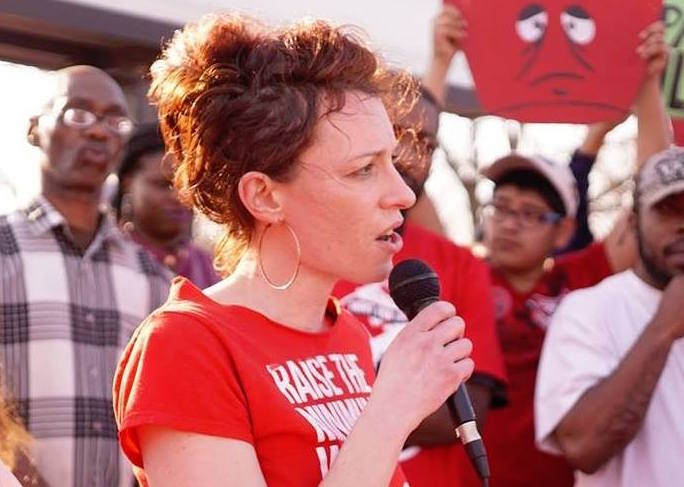 Why the Minneapolis Political Establishment Is Scared of Ginger Jentzen

The socialist city council candidate is running on a platform of rent control and reducing inequality—and she’s massively outraising her opponents.

"My campaign is focused on making Minneapolis affordable for all and building on the $15 campaign to make the city serve the interests of working people."

In many ways, Ginger Jentzen’s race for city council in Minneapolis’ Third Ward encapsulates the current hopes of the political revolution, as well as the roadblocks it faces. The longtime organizer’s campaign has brought together progressive unions, socialist organizations, grassroots volunteers and their allies across the city. Meanwhile, big business and the political establishment are openly mobilizing against Jentzen and the progressive agenda she’s running on.

A former service worker and executive director of 15 Now—an organization dedicated to raising workers’ wages—Jentzen, who is running on the Socialist Alternative ticket, has been endorsed by both her party and the Democratic Socialists of America (DSA). Socialist Alternative is a Trotskyist party that endorsed Jill Stein for president in 2016. In June, following years of organizing by groups including 15 Now, Minneapolis passed a $15 minimum wage, to be phased in over the next seven years.

Despite refusing to accept corporate money, Jentzen has outraised her three opponents—two Democrats and a Green Party candidate—by historic numbers, raking in over $140,000 as of mid-October, and is now the target of an outside spending spree by business interests. These corporate interests are seeking to combat her efforts to fight for affordable housing in a working-class district that in recent years has seen a dramatic shift from homeowners to renters.

In a fundraising e-mail, Steve Cramer, president of the Downtown Council, Jonathan Weinhagen, president of the Minneapolis Chamber of Commerce, and Kevin Lewis, president of the Building Owners and Managers Association, wrote, “If you thought it was impossible for a committed Socialist to run on a platform of rent control and establishing a municipal income tax to pay for social engineering … meet: Ginger Jentzen,” who they described as a “leading candidate” in the Third Ward.

Ahead of the November 7 election, Jentzen talked with In These Times about the most important issues affecting voters in her district, how her race demonstrates the old-fashioned battle between capital and workers, and the new opportunities for socialists of different stripes to bridge movement and electoral work.

Duhalde: What inspired you to run?

Jentzen: I think my candidacy flows somewhat naturally from the 15 Now campaign and how we ended up winning. We built a really powerful movement and organized a coalition.

My campaign is focused on making Minneapolis affordable for all and building on the $15 campaign to make the city serve the interests of working people. My experience has been that movements haven’t been welcomed by City Hall. I’ve seen hurdle after hurdle put forward by the political establishment here.

It was really a powerful experience to see what we could achieve through building a movement that was actually engaging communities all across Minneapolis. We’ve been identified as a city that has some of the starkest racial and economic inequalities in the country, with enormous wealth gaps between black and white residents.

I think if we had someone from the outset really laying down a marker, and using their position in the city council to continuously organize both inside and outside of City Hall for working communities to represent themselves, then I think we potentially could have won the $15 wage far sooner. I aim to put an eye on organizing City Hall, mobilizing around the issues we need to be solved in Minneapolis. Things like rent control, higher wages and putting pressure on developers to build affordable housing. We need all of these things, but they won’t be achieved if we don’t continuously organize and build a movement to win them.

Duhalde: Tell me about your district.

Jentzen: This is one of the oldest neighborhoods in the city of Minneapolis. It covers a lot of working and middle-class home-owners in the northern part of the ward. It’s also becoming increasingly renter-based, and that’s causing a bit of tension in the ward.

There’s lots of development happening, and much of it is on the luxury end. There has been a lot of anger growing around the enormous influence of big developers on City Hall, pushing a profit-driven agenda. There aren’t enough affordable housing units to ensure that people can continue to live and work in the city.

Duhalde: What are the main issues in your campaign?

Jentzen: I have made a public pledge not to accept corporate, executive or big developer money while running for office and through my tenure in City Hall. We’ve really been emphasizing the idea that my campaign is not for sale. Like Bernie Sanders, I think that you cannot serve two bosses. You cannot fully represent the needs of working people while you are accepting massive donations from big developers trying to profit off of our housing crisis.

At the core of this campaign is raising the demands—demands for tenant protections, for rent control, to tax big developers and to build more affordable housing. We have also discussed expanding public transit and social services for people in need, rather than keeping them in fear of deportation, homelessness and cuts to healthcare. We are trying to raise the question of what it would mean to actually have a city built around these issues.

Duhalde: Can you talk about the connection between movement and electoral work, and how Socialist Alternative and DSA are working together to support your campaign?

Jentzen: Seeing a candidate like Bernie Sanders raising the program that he did in the presidential election, and then having millions of people, especially young people, come out to support and build the political revolution against the billionaire class, I think it was an extremely exciting prospect for socialists across the country.

For Socialist Alternative and DSA, I think we have to continue to build that political revolution, raising demands like Medicare for All, and concretely organizing around them through outreach in working-class communities, wherever we have our chapters.

Members of DSA in the area have played an excellent role in raising the profile of the campaign and having bigger discussions around Medicare for All. People are very much concerned with what their healthcare is going to look like over the coming months and years. I think the best way to fight Trumpcare is to build a movement for Medicare for All.

I think these types of initiatives are extremely important to how we figure out the best way forward to combat the corporate agenda, the Trump agenda, and both win victories and also challenge the capitalist system as a whole.

David Duhalde is the vice chair of the Democratic Socialists of America Fund, DSA’s sister educational nonprofit. He is the former political director of Our Revolution and former deputy director of DSA.