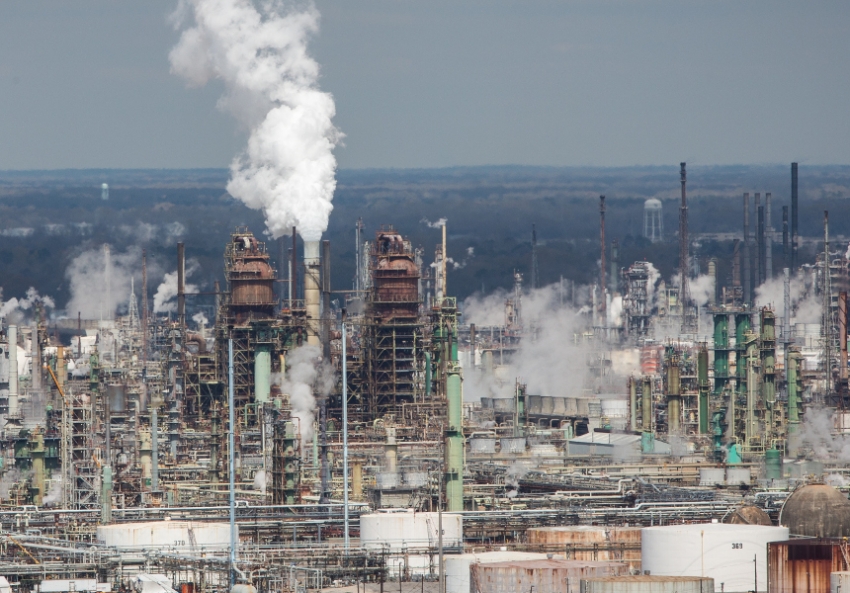 The Exxon Mobil refinery in Baton Rouge, La., is one of the largest in the country. It stands at a stretch of the Mississippi River known as "cancer alley" for its high number of oil and gas industry sites. To shut down the industry for good, the government must buy out privately owned fossil fuel reserves. (Julie Dermansky/Corbis via Getty Images)

For a big problem, we need big solutions.

We need systemic solutions that address this dynamic of profit and control head-on and rapidly phase out fossil fuel production.

We are sitting on a time bomb: more than 500 gigatons of carbon dioxide in the United States completely under the control of unaccountable fossil fuel corporations. These companies have so many incentives to turn their reserves into profitable returns on investment—are we really ready to stake our collective future on the hope that these companies go green in time to avert climate catastrophe? As the Trump administration continues to run down the carbon clock as quickly and as irresponsibly as it can, the time has come to promote solutions that can deal with this massive private control of fossil fuel reserves. A future government may have no choice but to de-privatize control of these reserves, which would detach them from single-minded profit interests and take fossil fuel companies, powerful forces of climate opposition, out of the equation as we genuinely figure out the rest of the green transition.

The 2017 Atlantic Hurricane season kicked-off with a series of record-breaking storms hitting the United States, leaving behind scenes of complete destruction in large areas of Texas, Florida, Puerto Rico and the Virgin Islands. It has been scary to see climate scientists’ predictions unfold before our eyes, and realize that this is our new “normal.” But the lack of debate around real solutions to mitigate further climate impacts is even scarier—as we’ve seen this week at the UN climate conference in Bonn, Germany, where the United States attempted to promote fossil fuels as the “answer” to the climate problem, an initiative that former New York mayor Michael Bloomberg has compared to “promoting tobacco at a cancer summit.” This season made crystal clear we need a game-changing solution to ensure that fossil fuels remain unburned and in the ground.

Many efforts have been pursued over the years seeking to decrease fossil fuel extraction and production. On one side are initiatives aimed at reducing demand for fossil fuels: increasing the demand for renewables, improving efficiency, adopting a carbon price, or banning future production and sale of gas-powered cars, as China, Britain and France have recently done. Others have worked on the supply side, working with private landowners to lock out extraction, or pushing the government to increase regulation and to end leasing of reserves on federal lands. In the final years of his presidency, Barack Obama made advances on some of these fronts—efforts that were soon reversed by Donald Trump’s administration.

But even if these efforts were successful, they would still be too little, too late, as they fail to deal with the elephant in the room: who really controls the majority of U.S. fossil fuel reserves. Although federal lands produced almost 376 million tons of coal, 755 million barrels of oil, and close to 5 trillion cubic feet of gas in 2015, these accounted for only around 40 percent of coal production and less than a fifth of oil and gas production in the country. That means that the majority of coal and more than 80 percent of all combined oil and gas production in 2015 came from resources located outside of federal control. In most countries, such reserves remain by and large under public control through state-owned companies—but in the United States the opposite is the norm, with most proven reserves controlled by private interests.

This is a serious roadblock for any effective green transition, and perhaps one reason why the United States is the only country opposed to the Paris Agreement.

If, as suggested by the think tank Carbon Tracker, 80 percent of proven reserves need to be kept in the ground, that means that any efforts at curtailing U.S. fossil fuel extraction have to go beyond limits on federally controlled reserves—and this means confronting the basic economic drivers of the extractive economy. Private companies’ values are determined by their assets and their capability to turn those assets into products and services demanded by society. In the case of fossil fuel companies, their assets are composed mainly of proven fossil fuel reserves—reserves that are economically and technically recoverable under current conditions. To maintain their value, and ongoing investments, fossil fuel companies must continue turning these assets into products and replace any extracted assets with an equal or higher amount of new reserves. Failure to do so negatively impacts their market value—and threatens their survival.

How do we break this vicious cycle of inevitable extraction in time? We need systemic solutions that address this dynamic of profit and control head-on and rapidly phase out fossil fuel production. Some people are willing to take the chance that such production will become unfashionable or even unprofitable as the costs of renewables continues to drop. But the most direct and only guaranteed way to do so is to change the rules of the game by taking control of U.S. fossil fuel reserves out of corporate hands through nationalization.

Such de-privatization could be accomplished through a buyout of fossil fuel reserves’ top controllers: fossil fuel companies. While the U.S. has hundreds of such companies, the reality is that only a few of these together control the vast majority of proven reserves in the country. Take oil and gas, for example: Ten U.S.-based, publicly held companies control close to a quarter of all American proven oil and gas reserves. A targeted buyout of fossil fuel majors would not only make up for lost time, but it could prevent vast amounts of CO2 from entering into the atmosphere through a managed decline in fossil fuel production, provide a breakthrough solution capable of dealing with the private and federal reserves already leased to private companies, remove powerful opposition to climate action from the political equation and unlock the possibility of a just energy transition in the U.S., especially if the buyout was structured in a way that encouraged or mandated reinvestment in renewables and resiliency.

While many may fear that a buyout is unlikely in the present political configuration, there are several historical precedents that show that such a decisive step is not as foreign to the American political experience as one might suspect. We could go as far back as WWII, in which wartime mobilization took over vast swaths of the national economy, but in the 21st century alone Americans have experienced buyouts and de-privatization of major industries more than a handful of times—under both red and blue administrations.

Take, for example, the tobacco buyout. After recognizing the magnitude of the impact smoking has on public health, the George W. Bush Administration decided to cut the subsidies given to tobacco producers while providing a $10 billion buyout to help farmers replace lost income, retire or transition to growing different crops. In the aftermath of the 2007-2008 financial crisis, both Bush and Obama Administrations de facto nationalized a number of companies, including financial institutions, insurance companies and even General Motors, to bring back stability to the financial markets.

A future in which the dynamics baked into our current system of ownership, control and investment are allowed to run their course is one in which the kinds of climate catastrophe we saw this hurricane season will be multiplied many times over. As vast amounts of greenhouse gases continue to be released into an already carbon-constrained atmosphere, securing public control of America’s proven fossil fuel reserves can buy us the precious time we need to avert disaster.

Carla Skandier is a Research Associate with the Next System Project, working on addressing climate change through systemic solutions.