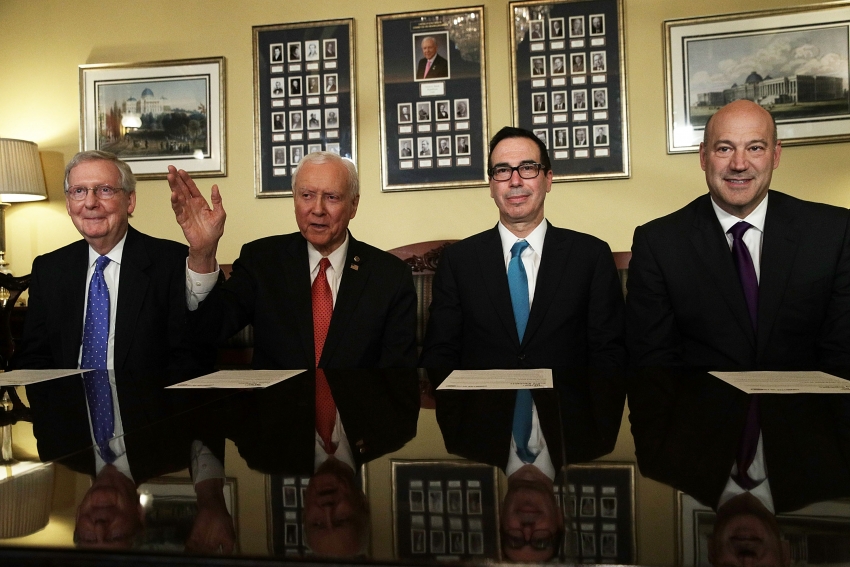 The financial elite are chief beneficiaries of racial division and the policies they support exacerbate it. (Photo by Alex Wong/Getty Images)

To end the immoral abuses documented in the Paradise Papers, we must challenge the systems of both entrenched wealth and racial domination.

That billions of dollars in wealth is now sitting stowed away in the Caribbean while every day families in America struggle to feed themselves is an injustice of cosmic proportions.

The Paradise Papers, a stash of over 13 million documents from 19 tax-haven nations and two offshore law firms leaked this month to the German newspaper Süddeutsche Zeitung, present an archive of global avarice.

Today, the richest one percent own half of the world’s wealth. The Paradise Papers show how this global elite uses offshore tax arrangements, often perfectly legal, to circumvent both the obligations of citizenship as well as the consequences of ownership. The demands which apply to the rest of us—the obligation to pay our taxes, to pay our debts and our civil liabilities—do not apply to them. In many ways, the class war has been won, and the spoils of the victors sit safely sheltered in the Cayman Islands.

The documents reveal that thousands of the world’s richest individuals and companies engage in regulatory arbitrage to evade tax authorities in their home countries. An estimated $8.7 trillion—10 percent of world’s GDP—is currently stashed offshore, almost all of it belonging to the richest 0.1% of households.

This system of global tax evasion exacerbates inequality and deprives governments of resources that could be used to benefit the public. Up to $699 billion sits in offshore accounts. According to a 2016 study, the United States alone loses $111 billion in taxes each year due to this practice. Yet, at this moment, Republicans in Congress are moving forward with a tax-reform bill that would significantly lower the tax burden on the super-rich. And the GOP bill, which would balloon the federal deficit, is almost certainly a prelude to deeper cuts to the social safety net. Rather than punishing the selfish and destructive behavior of the super-rich, Congress is poised to reward it.

That billions of dollars in wealth is now sitting stowed away in the Caribbean while every day families in America struggle to feed themselves is an injustice of cosmic proportions. This fact should blare like a siren every time we see a homeless person, every time we hear the story of an uninsured child, every time we sit down to balance a tight family budget. And it should motivate us to fight the obscene inequality that pervades our society.

But, for the most part, it doesn't. A number of Democrats, including Sen. Richard Blumenthal of Connecticut, have seized on the revelation that Trump’s Commerce Secretary Wilbur Ross hid financial ties to Vladimir Putin’s son-in-law, Kirill Shamalov. Bernie Sanders, true to form, has called for an end to the “global oligarchy.” Yet the Paradise Papers, like the Panama Papers before them, have generated no great backlash in the United States. Many Americans seem resigned to the explanation offered by Trump’s chief economic advisor Gary Cohn that “this is the way the world works.”

But why? Where is the rage? How can Americans be placid in the face of injustice so transparent? This is the question we should be asking ourselves.

Part of the answer is that we lack a clear outlet for our rage. Our democracy has become so captured by the influence of big money on our political system that the available pathways to channel our anger into reform can appear scant. Another answer is less widely acknowledged, but no less important. Today’s economic robber barons are sheltered from the ignominy of their crimes by the resurgence of a parochial, racist nationalism. Financial elite such as Steve Mnuchin and Gary Cohn, both Trump administration officials, are perfectly happy to make common cause with white nationalists like Steve Bannon. Why? Because more than anything, what the super rich need is someone else to blame.

It’s no coincidence that many white workers believe their antagonists are working people of color and immigrants, rather than the wealthy capitalists who control their lives. Though most working-class whites believe the economic system unfairly favors the rich, they also tend to believe welfare recipients are gaming the system—especially if those welfare recipients are non-white.

A recent poll shows that 68 percent of working-class whites believe the United States is “in danger of losing its culture and identity.” And racial resentment, political scientists Jason McDaniel and Sean McElwee have found, is a strong predictor of opposition to government aid to the poor. By stoking racial animus, those in positions of extreme power and wealth are able to fleece the working class and protect the interests of their fathomlessly affluent friends while redirecting white anger towards the racial other.

A coalition of racists and plutocrats have stigmatized our best means of fixing inequality—redistribution and social programs—by associating them exclusively with supposedly “undeserving” outsiders: “welfare queens” (Ronald Reagan’s dog-whistling term for poor black mothers), undocumented immigrants or Muslim refugees. In this way, the wealth of the one percent is shielded by white racial panic.

The mistake many liberals and leftists make is imagining that these twin threats can be disentangled. That we can confront the racists without confronting the super rich as well, or vice versa. That, perhaps, the globetrotting economic elite can be an ally in the fight against resurgent nationalism. But this is a fantasy. There’s no need for the one percent to sign on a dotted line approving this bargain. The financial elite are chief beneficiaries of racial division and the policies they support exacerbate it.

The truth is, there are free riders in our economic system—people who have never known a hard day’s work and who enjoy the benefits of society without bearing its responsibilities. But they aren’t the urban dwelling poor of the conservative imagination. Rather, they’re the children of extreme privilege, the names listed in the Paradise Papers, who leech off the largesse of a system designed to cater to their every whim.

Getting a majority of Americans to understand this, and to collectively organize to change it, will require fighting racism and economic inequality together, as mutually-reinforcing conditions of the status quo. The Paradise Papers should serve as a reminder of the urgency of this task.