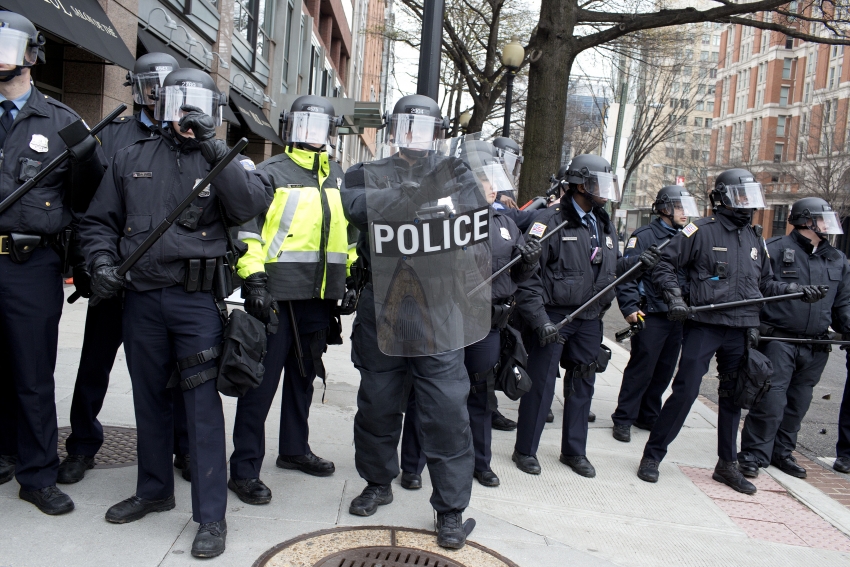 As the J20 Trial Begins, We Must Not Allow Trump to Imprison Dissenters When They Are Needed Most

A defendant calls for collective defense against repression—and continued resistance.

Help us fight these charges, so we can all continue to stand against bigotry and defend each other.

Editor’s Note: On Inauguration Day, thousands of people took to the streets of Washington, D.C. to participate in a “Disrupt J20” coordinated day of direct actions, blockades and protests against the incoming Trump administration. One part of this mobilization—the anti-capitalist, anti-fascist contingent—was targeted by a heavy police crackdown, and more than 200 people in or near this demonstration were surrounded and arrested. Now, more than 190 of the people caught in this sweep face rolling trials, with the first kicking off this week as supporters flood the courtroom. The majority of defendants are fighting heavy charges and up to 60 years in prison at the hands of the U.S. Attorney’s Office for the District of Columbia, which answers directly to Jeff Sessions’ Department of Justice. Often vilified in the press, J20 defendants have had few public platforms to share their experiences on Inauguration Day—and describe what motivated them to take action.

Not even a year into the Trump presidency, our social and political fabric seems to be unraveling. Wild fires have ravaged northern California, and record-breaking storms have barraged parts of the Gulf Coast and Caribbean regions. Swastika-wearing white supremacists marched through the streets of Charlottesville, and mass deportations are tearing communities apart. This is the terrifying future promised by Trump that motivated me to join others in protest on the streets of Washington, D.C. on Inauguration Day.

In response to protest during the inauguration, the Metropolitan Police Department (MPD) used chemical and projectile weapons to attack dissidents—in line with the MPD’s  history of mishandling protest. Police directed abuse at children, the elderly and disabled people.  The reaction was so violent that the Washington, D.C. Mayor’s Office of Police Complaints accused police of using excessive force and recommended an independent investigation, which is currently in its early stages.

After assaulting people on the streets with chemical weapons and stinger grenades, the police kettled more than 230 people. This drag-net style of arrest indiscriminately sweeps up large portions of marches and subjects those it catches to arrest—often initiating lengthy, resource-draining court processes. Despite widespread condemnation of this tactic, kettling has become an all-too-common police method for suppressing protest. We see these police actions, also recently used in St. Louis, as an effort to get large numbers of dissidents off the streets and into the court room so they can no longer resist.

Those of us kettled on Inauguration Day were forced to stand outside in the cold and deprived of food, water, medical treatment and bathrooms. As if that weren’t bad enough, the U.S. Attorney’s Office charged us all with the same blanket eight felonies that carry a sentence of up to 70 years if convicted. We believe this was an attempt by the prosecution to scare defendants into accepting pleas. As trials drew closer, some charges were lowered or dropped. But I am one of nearly 200 people preparing for a trial where I will face six felony charges and up to 60 years in prison for resisting the Trump regime.

We are not alone. Other activists from across the country are also facing repression for resisting the Trump administration and the racist legacies it supports. Hundreds of protesters in Durham, Santa Fe, Philadelphia, St. Louis, St. Paul, Chicago, Standing Rock and beyond have been criminally charged for their resistance.

The march on Inauguration Day was to be the antithesis of all that Trump stands for—a level of opposition that the administration finds intolerable. We and other dissidents come from communities that Trump has already denigrated and harmed. The violent fascism and bigotry that accompanied Trump’s rise to power poses a threat to us all. The last year has proven that the government will do little to stop his administration from devastating and harming marginalized communities.

The only thing that can really protect us is a robust and pervasive culture of resistance. Yet, the Trump administration is treating our acts of self-defense and opposition as more of a threat than real acts of white supremacist terrorism, such as those seen in Charlottesville  and Gainesville.

Unlike some of the “alt-right” groups that organize so-called “free speech” rallies that afford opportunities to attack vulnerable communities, anti-capitalist and anti-fascist organizers don't spend our weekends training at paramilitary camps. Our movements are vilified in the press and targeted by police, but we’re your friends, your neighbors and your family members. Some of us in the movement are first responders, nurses, water protectors, teachers, students and parents. Some of us are in our early 20s, and some of us are old enough to be grandparents. Our movements are comprised of everyday people who refuse to let our friends and loved ones suffer and live in fear.

When we're not out marching in the streets, we spend our time setting up food shares, founding libraries, providing healthcare and sometimes even filling potholes when the state fails to do so. While Trump ignores climate change and those it harms, our movements are providing autonomous disaster relief in Texas, Florida and Puerto Rico. After U.S. Customs and Border Protection checked people's immigration papers as they fled Hurricane Harvey in Texas, and arrested undocumented parents while they awaited their child’s surgery, our movements are helping protect those targeted by ICE raids and held for years in detention centers.

Despite the strain these politically motivated charges put on defendants and our communities, those of us directly impacted by this case are doing all we can to support and protect each other.

We cannot rely on the state to protect us or meet our needs—a reality routinely confirmed by the actions of the Trump administration. Our hope for a better world lies with each other. As people across the country and world work to confront fascism and bigotry, communities in resistance will continue to face escalating violence and repression. It is essential that people continue to resist—and give voice and power to a future in which we not only survive but truly thrive. If we fail to ensure our livelihood and our dignity, the government and the alt-right will continue to marginalize and target us.

Now is a time to build our collective defense against the political repression and violence of the Trump administration and its tacit support for white supremacy. We ask those who truly desire a free and egalitarian society to stand with J20 defendants and other activists. Help us fight these charges, so we can all continue to stand against bigotry and defend each other.

Olivia Alsip is a Chicago-based defendant in the J20 case.

CAP Publicly Distanced Itself From the UAE. 8 Months Later, It Was Still Meeting with UAE Lobbyists.