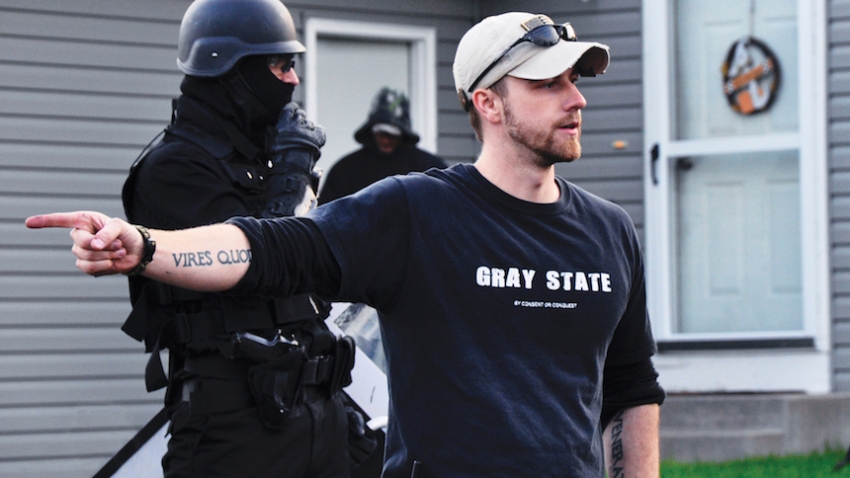 A Gray State, directed by Erik Nelson and executive produced by Werner Herzog, airs on A&E in December.

The new documentary A Gray State, executive produced by Werner Herzog, explores a murder-suicide that has become a far-right obsession.

Nelson benefits from both Crowley’s ambition and his megalomania, and even exploits them, but the problem with A Gray State remains with how Crowley fails to represent anything beside his own very private conflicts.

In Erik Nelson’s new documentary, A Gray State, we get the granular lowdown on the David Crowley case, which has become a fringe cause, as a supposed symptom of the darker forces so enthusiastically perceived by Americans within their own social structures.

Crowley, a handsome, eloquent and quick-thinking Iraq War veteran, returned in 2009 from an unwanted extra deployment in Afghanistan with a bitter chip on his shoulder and immediately enrolled in film school. The feature film he began planning, Gray State, is a pedantic indie B-movie about the fascist takeover of America by moneyed elites, necessitating citizens (like Crowley) to take up arms and fight back.

Unemployed and obsessed, Crowley shot an elaborate trailer for the film, networked online and attracted thousands of “fans” eagerly awaiting the finished movie. He even got real Hollywood producers interested. Then, things went mysteriously wrong, and before anyone knew it, in 2015, Crowley, his wife and their 5-year-old daughter were dead.

With “Allahu Akbar” written on the wall in the wife’s blood, the question is inevitable: murder-suicide or assassination? Within the super-culture of paranoiacs and keyboard freedom fighters, the carbonic odor of black-op injustice is still in the air. The libertarian “revolution,” bullhorned along by the likes of Alex Jones, would have Crowley as a martyr-artiste, murdered by the state.

Nelson’s film is a fairly straightforward police-file-and-talking-heads affair, energized by the use of Crowley’s own storehouse of footage, and in essence positing him as a co-director. (Crowley gets his only legit film credits here, for music and cinematography originally intended for his movie.) The weird dynamics of watching the repurposed footage of a dead man is fascinating and more than a little voyeuristic, as it was in Werner Herzog’s Grizzly Man. (Nelson produced Grizzly Man, and Herzog is listed as a producer on A Gray State.) As it is, Nelson benefits from both Crowley’s ambition and his megalomania, and even exploits them, but the problem with A Gray State remains with how Crowley fails to represent anything beside his own very private conflicts.

We see footage of him being celebrated at militia rallies, but most of the Crowley we see is stuff he shot himself, as promo material, as home movies and sometimes as surveillance footage he seems strangely unaware of. There’s little or no sense of the man objectively. His gun-happy libertarian politics were simple enough, until he ceased being political altogether and withdrew behind a sudden veil of muddled evangelical beliefs. No one in his friend circle can explain why he and his wife might decide to die together and be “raptured.”

So much for conspiracy theories—Crowley didn’t need help falling off the edge. But without them, there’s no larger way to see Crowley’s sad story as revealing anything about the boiling cauldron of American divisiveness.

Did Crowley deserve the hubbub to begin with? What nags about Nelson’s film is how it, like so much else in the culture at large, blithely agrees with the rest of mainstream media that online attention, measured in “views,” is actually worth the pixels it’s illuminated by. Most of the time, garnering that attention boils down to making something, be it a vlog post or ideological website or whatever, that a few thousand people glance at, and even “like,” before they move on to the next internet splooge. Hardly a mandate for relevance. (That is, unless you’re an advertiser.) The New York Times may regularly report when social media “blows up,” and even quote a lucky meme-ster. But in reality, having a certain number of Twitter followers or Facebook trolls or “fans” very often signifies exactly nothing. Crowley is just another ephemeral internet ghost, fleetingly famous for all the wrong reasons.

If anything, Crowley might be taken as a cautionary tale about alt-right extremism, lending anecdotal yet pungent evidence to what may seem apparent to most of us anyway: that full-throttle investment in fascist fantasies and paramilitary self-sufficiency is like any other kind of irrational faith, a brand of disassociation that leads to self-mythology, tribal spite and violence. Given our culture of guns and fame lust, maybe we should consider ourselves lucky Crowley ended his journey without leaving the house.