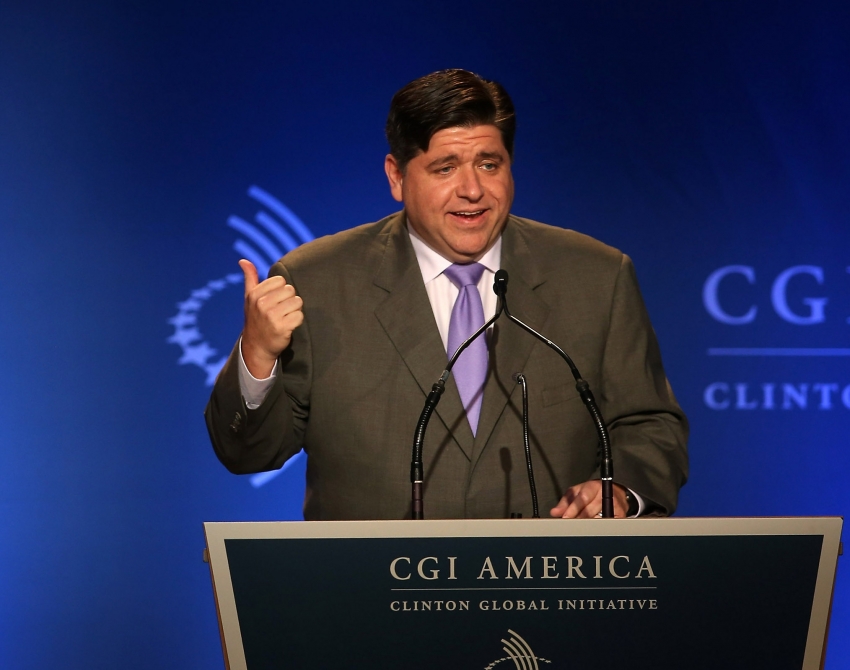 The wealthy few, by and large, engage in politics to expand their private profits, not the public good. (Scott Olson/Getty Images)

We must start now, and undertake the difficult task of building power in a rigged system. We have to look to organizing to give political expression to the social movements growing across the country.

With dysfunction and political deadlock on the rise in Washington, D.C., important policy fights have been pushed to the state and local levels. And in a political environment already inundated in campaign cash, big money has followed.

So, too, has public discontent. Take the case of Chicago. In a mid-September poll, two-thirds of Chicago voters said that city government is seriously off track. Just one in five approved of the direction the city is going.

By most indicators, the quality of life for average Chicagoans continues to erode. High levels of gun violence claim a tragic number of victims in areas across the city. Residents in gentrifying neighborhoods face rising rents and the threat of displacement. And the assault on the public sector has left schools, clinics, libraries, and other public resources shuttered or underfunded while intensifying segregation and racial inequities.

At a time when the people of Chicago needs their leaders to tackle these difficult problems for the benefit of the many, our political class has all too often proposed solutions for a narrow few.

Across all levels of government, out-of-control political spending by corporations and the rich is poisoning public dialogue, corroding our political process and leading to limited options and bad outcomes.

Take the recent debate over implementing a soda tax in Cook County. In a big-money brawl between the beverage industry which opposed the tax and former New York mayor Michael Bloomberg, who supported it, each proposed unsatisfying solutions.

On one side, the beverage industry pushed a pro-job narrative to protect its ability to rake in profits by peddling sugary drinks. Meanwhile, Bloomberg, one of the richest men in the world, harped on public health benefits to justify regressive taxes on the poor and middle class.

Drowned out from the debate were the voices of working-class Cook County residents, who might wonder if they could have both health and jobs if billionaires and corporations paid their fair share—an option never put on the table. Spending on both sides of the soda tax fight served to limit the debate to a range of “solutions” acceptable to the rich and powerful.

In Illinois, campaign-related donations have exploded over the past 20 years, according to the nonpartisan Illinois Campaign for Political Reform. In 1996, political donors in Illinois spent $37 million on candidates and campaigns. In 2016, that number ballooned to $413.2 million.

Each year, a small group of ultra-rich donors accounts for more and more of that political spending. The same few names show up over and over again, including finance mogul Ken Griffin, the richest man in the state and top donor to Democratic Mayor Rahm Emanuel. Over the course of three years, Griffin also gave over $40 million to Republican Gov. Bruce Rauner and other Illinois GOP leaders.

Of course, when it comes to political spending in Illinois, no one tops Governor Rauner himself. The private equity executive has worked to remake the Illinois Republican Party in his own image through campaign cash and a lavishly funded network of lobbyists and interest groups.

A new political boss for our new gilded age, Rauner has wreaked havoc on the state in a failed attempt to ram through his hard-right, big business agenda. Preparing to try again in 2018, he’s kicked off his re-election effort with a $50 million personal contribution to his own campaign.

Up against Rauner's nearly $67 million war chest, the Illinois Democratic Party has searched for its own billionaire to self-finance a gubernatorial campaign. Many party leaders are looking to billionaire J.B. Pritzker, an heir to the Hyatt Hotel fortune who has already donated tens of millions to his own campaign. Others are jumping on board with businessman Chris Kennedy, the multi-millionaire son of Robert Kennedy.

Both major parties increasingly rely on the money—and candidates—from the 1%, claiming there is no other path to victory.

But what is lost when we compete on these terms? Depending on benevolent billionaires—no matter how sincere—and the solutions they present us, means resigning ourselves to leaving power in their hands and taking proposals for deeper change off the table.

The increasing concentration of wealth and political power are driving causes of austerity and inequality, not a separate concern. The wealthy few, by and large, engage in politics to expand their private profits, not the public good.

Billionaire liberals like Pritzker and Kennedy may be less despicable than Rauner, the Koch brothers or Trump. But the failure of these establishment Democrats to name racism, extreme wealth and corporate power as the primary culprits for the problems plaguing our society shows they are committed to treating the symptoms without addressing the underlying diseases.

The ever-shrinking landscape of political possibility is directly linked to the explosion in political spending by just a handful of ultra-rich individuals. No wonder voters are so disgusted.

The kidnapping of our political process by the wealthiest 1% has been a generational project. It will take many years to abolish “corporate personhood,” reverse the structural changes that the well-financed Right has used to disenfranchise and marginalize huge swaths of the electorate, and to build the political organizations we will need to advance a progressive agenda.

But we must start now, and undertake the difficult task of building power in a rigged system. We have to look to organizing to give political expression to the social movements growing across the country.

Senator Bernie Sanders outperformed all expectations in the 2016 Democratic primary by building a strong, diverse base of supporters, organizers, volunteers and small donors.

United Working Families, an independent political organization in Chicago funded entirely by working people and our membership organizations, aims to do just that in the 2018 elections, backing a progressive slate of grassroots candidates of color who can begin to restore our hope in the process and to build the political organizations we need on the ground to take our state and city back.