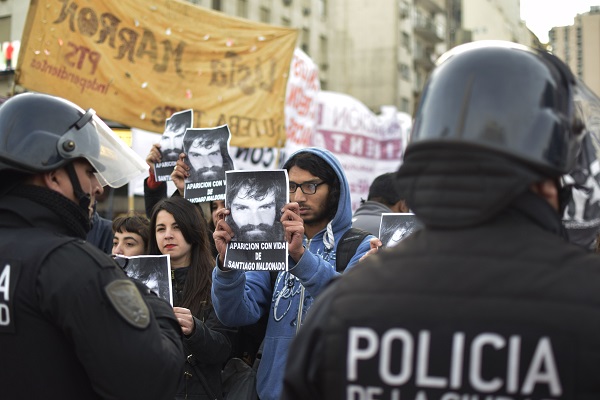 People have taken to the streets across Argentina to protest the disappearance of Santiago Maldonado. (Enfoque Rojo)

A conflict between indigenous communities and capitalist plunderers has long been simmering. The case of Santiago Maldonado brought tensions to a boiling point.

This backdrop of state repression and hostile political climate foreshadowed Maldonado’s disappearance by the end of summer.

For the past three months, an unsettling question has riled Argentina: Where is Santiago Maldonado, the indigenous rights activist disappeared under murky circumstances after a protest? The tragic answer took 78 days to establish.

Santiago Maldonado, 28, was last seen on August 1 at the Pu-Lof indigenous community in Chubut, Patagonia. An artisan and organizer from El Bolsón, he traveled to support the Mapuche’s struggle. Dwellers of the Patagonia region, which abuts Argentina and Chile, the Mapuche people have been demanding the restitution of their ancestral land and protection from the encroachment of multinational corporations, such as the clothing manufacturer Benetton.

Since the 1990s, land grabs have plagued Argentina, where soil is sold at ridiculously low prices. Italian billionaire Luciano Benetton tops the list of foreign land owners in Argentina, with more than 2.2 million acres bought in the 1990s at a remarkably low cost.

But he is not alone. Ted Turner, Jacob Suchard (owner of Nestlé) and George Soros, among others, have also heavily invested in the large swaths of land in the Southern Cone, the southernmost part of South America. The arrival of foreign capital to the Patagonia has brought predictable consequences: the plunder of natural resources by extractive industries, the displacement of indigenous and first nation populations, the enclosure of land and violent state repression.

What happened on August 1?

In the past 15 years, the conflict over the land on which the Mapuche community lives has escalated on both sides of the Argentinean-Chilean border. The government of Chile first levied charges of terrorism against the Mapuches in 2002.  Today, this conflict has reached fever pitch. In a particularly concerning turn of events, Mapuche leader Facundo Jones Huala was jailed in Argentina in June of this year under charges that had already been dismissed by the Argentine courts—on the grounds that they were based on a testimony obtained through torture in Chile.

This backdrop of state repression and hostile political climate foreshadowed Maldonado’s disappearance by the end of summer. As early as August 1, Maldonado took part in a roadblock at the Pu-Lof Mapuche territory, now owned by Benetton. Participants iin this roadblock demanded the freedom of Jones Huala, the leader of Resistencia Ancestral Mapuche (RAM), a nationalist Mapuche organization. Faced with a brutal repression by the National Gendarmerie, those at the roadblock were forced into the weeds and towards the river. Maldonado was never seen again.

What followed changed the political landscape. Maldonado’s picture inundated social media, and  a campaign began—one in which hundreds of thousands asked the seething question: Where is Santiago Maldonado?

Maldonado’s disappearance sparked a wave of mass protests across the country. Human rights activists, political parties, student organizations and unorganized crowds filled the streets of Buenos Aires and elsewhere. The traditional Plaza de Mayo was filled several times in the span of two months by protesters demanding that the government “bring him back alive.” As mobilizations mounted, a political crisis ensued, and the case caught the attention of international media.

This swift popular reaction stems from Argentina’s history of state terror. In 1976, in response to an emboldened labor movement and a rising revolutionary Left, a military junta took the reins of the government and instated a bloody dictatorship that took the lives of 30,000 activists, workers and students. The genocidal dictatorship in Argentina was one component of a regional operation engineered by the CIA, with the aim of gutting the “threat of communism” in South America. The victims were kidnapped and physically eliminated, leaving almost no trace behind. They were disappeared.

The memory of those dark days is an open wound in the psyche of the Argentinean people, a wound that could only be overcome through the struggle for human rights. A month after Santiago Maldonado disappeared, hundreds of thousands marched onto the Plaza de Mayo, and protests were held in major cities around the world—including New York, Barcelona, London and Paris.

While the main labor federation, General Confederation of Labor, was noticeably absent from key actions, the second-largest labor organization, Argentine Workers’ Central Union, turned out. And some unions engaged in creative campaigns. Laid-off workers of PepsiCo, who earlier this year became a symbol of militant labor organizing, pulled off a music festival in front of the National Congress, where they held an encampment.

Teachers across the country launched their own crusade against the impunity of state violence: They brought the case of Santiago Maldonado to the classroom through a diversity of activities, from poetry sessions to public classes or to even calling out his name when taking attendance. The teachers’ union, Education Workers’ Confederation (CTERA), printed thousands of booklets to use in class to discuss Maldonado’s case. What transpired in the classrooms assumed a larger political and national element.

The response from the government of President Mauricio Macri can be summarized as incompetence and concealment. While the investigation was mired in irregularities, the government engaged in a dirty campaign portraying the Mapuche as criminals.

National Deputy for the ruling Cambiemos, Elisa Carrió, claimed that the Mapuche RAM is a “terrorist” organization operating in the southern region of Argentina—and that Santiago Maldonado might have been involved with them before allegedly fleeing to Chile. By implying that Maldonado was tied to this militant organization, then depicting them as terrorists, she was likely trying to whitewash or justify the government’s possible responsibility for his death.

Initially, the government tried to deflect responsibility for the repression that preceded the disappearance of Santiago Maldonado. But it quickly came to light that the gendarmerie was acting under the direction of Pablo Nocetti, chief of staff of the Ministry of Security.

When mobilizations acquired political clout and grew in size in Buenos Aires, the government infiltrated them with provocateurs to cause disruption and delegitimize them. When teachers brought the debate to the classrooms, National Secretary of Education Alejandro Finocchiaro chastised the teachers’ union CTERA, calling their educational booklet on Maldonado “rogue and mischievous.”

The body of Santiago Maldonado was found in the Chubut River, 300 meters upstream from where he was last seen. He was identified only two days before national elections were held. The results of the autopsy showed no signs of trauma, only evidence of death by drowning.  However, there are curious facts surrounding the death, including that the area had been searched eight times before the body was found—in an area already covered. Regardless of the results of the autopsy, human rights organizations, progressives and opposition politicians believe the gendarmerie is responsible for Santiago’s death, since the repression is what precipitated the outcome.

The case of Santiago Maldonado brought to the surface a simmering conflict between indigenous rights and capital’s frenzied zeal for natural resources. As recently as late November, a person from the Mapuche community was identified as killed by a gunshot by the gendarmerie in an obscure incident in Lago Mascardi, Province of Río Negro.

The government has only hitherto intervened to reinforce the powerful and quell the vulnerable. However, the reflex by the Argentinean people has demonstrated a readiness to fight. They’d better be, as the struggle will be long.

Juan Cruz Ferre is a writer and editor for Left Voice and La Izquierda Diario. He is a political activist and medical doctor from Argentina and is currently pursuing a PhD in Sociology at the City University of New York.