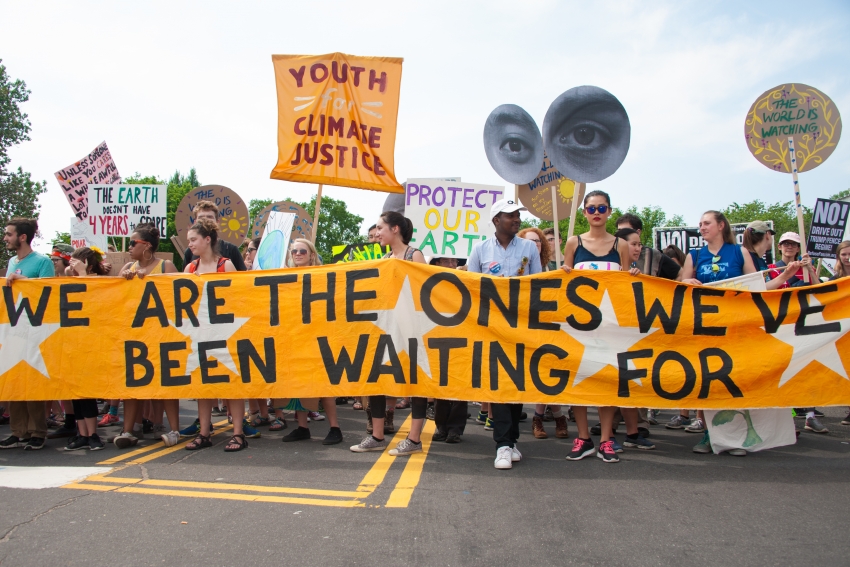 If Democrats Want the Support of Millennials, They Should Cut Ties with the Fossil Fuel Industry

The Lawmakers elected in 2018 must lead one of the biggest government projects in history—a rapid transition to a 100-percent renewable energy economy.

As the record of the GOP shows, politicians trying to please Big Oil donors cannot be counted on to make decisions in line with what science says is necessary.

Following a slate of progressive wins in late 2017, all eyes are on the 2018 elections. Many across the political spectrum now think the midterms could be a “Blue Wave”—with Democrats sweeping into office up and down the ballot. But amid all the buzz, a critical question remains: Which Democrats will ride the Blue Wave into power? Will it be those who accept campaign contributions from and act on behalf of wealthy oil and gas executives and lobbyists, or will it be those willing to take a stand against that industry to guarantee a safe and secure planet?

From issues of land sovereignty to environmental racism, there are myriad reasons why we need elected officials to reject the influence of this dirty money. But the conversation becomes all the more urgent when considering the existential threat of climate change, caused in large part by the burning of fossil fuels. To stop record-breaking, life-shattering events like Hurricanes Irma, Maria, and Harvey, and the California wildfires from becoming the new normal, scientists say industrialized countries like the United States must take massive action by the early 2020s to transition our economy away from oil, gas and coal-based energy.

Oil and gas executives strive to maintain company profits, which means holding back this very transition. They are adept at using their deep pockets to pressure politicians into carrying out their pro-fossil-fuels agenda. If Democratic candidates choose to let Big Oil ride the Blue Wave this year, the prospects for action at the scale we need are grim. Partnering with these oil and gas executives would not only be disastrous for our society’s ability to stop climate change, it would also be deadly for millennial voter turnout. Millennials were crucial to Democratic wins in 2017, and we broadly disapprove of politicians taking money from the companies imperiling our futures. The authors of this article are staff members for the organization Sunrise, which is building an army of young people to break the grip of the fossil fuel industry on our politics.

Over the past eight years, oil and gas magnates like the billionaire Koch Brothers have used their massive wealth to change the direction of major political parties. Republican politicians who support any action to stop climate change immediately face primary challengers from climate deniers.

While the focus of the fossil fuel industry has been the Republican Party, they’ve spent millions in lobbying and campaign contributions to Democrats. In the 2016 election cycle, the oil and gas industry gave $7.6 million to federal Democratic candidates. Gas pipeline companies gave $1.5 million, and utilities gave $10.1 million. Calif. Gov. Jerry Brown, who bills himself as an international climate leader, has taken hundreds of thousands of dollars from the industry and lets these companies shape climate policy for his state. In 2016, Hillary Clinton received $892,252 only $22,000 less than Trump. The results were clear: Clinton refused to support a carbon tax or a ban on fracking, while Bernie Sanders, who pledged to refuse contributions from fossil fuel executives, had a much more ambitious climate platform.

Right now, many signs point to big opportunities for Democrats in 2018. Trump and the GOP continue to push an unpopular agenda that most Americans see as benefiting the rich at the expense of the middle class. The health care and tax bills are the most unpopular pieces of major legislation in the last 30 years. In part because of this agenda, the generic Congressional Democrat is currently polling 10 points above the generic Republican.

Fossil fuel executives can also see the Blue Wave coming, so we can expect they’ll try to pour even more money into buying off Democrats in 2018. If they succeed in co-opting the Blue Wave, it will be nothing short of disastrous for the fight to secure a safe world for our generation. The Democrats we elect in 2018 must lead one of the biggest government projects in history—a rapid transition to a 100-percent renewable energy economy. If elected, they will be the ones debating how ambitious to make landmark climate legislation in 2021. As the record of the GOP shows, politicians trying to please Big Oil donors cannot be counted on to make decisions in line with what science says is necessary.

These debates and policies will shape the course of human history, and it’s time progressives started acting like it. In 2018, we need to draw a line. Rejecting the bribes of fossil fuel executives, lobbyists and front groups must be the bare minimum of any party seriously claiming to care about stopping climate change and protecting young people’s futures.

For the first time, the millennial generation will be the largest voting bloc in U.S. politics. We’re facing down the terrifying reality that within our lifetimes, climate change will transform our world. We come from diverse communities already feeling the impacts of the crisis, so, unsurprisingly, we overwhelmingly support ambitious climate action. Eighty percent of us want to transition America to “mostly” clean or renewable energy by 2030.

This year, Democratic politicians across the country will have a choice: do they want to court the volunteer hours and votes of young people, or the campaign contributions of fossil fuel executives? Those who choose the support of fossil fuel executives will be judged harshly by history, but the consequences may be felt sooner. Despite the projected ‘Blue Wave,’ Democrats face a difficult and gerrymandered political map in 2018. To win, they will need an energized volunteer army, and that will take the energy and time of tens of thousands from the millennials and Generation Z to pull off. If candidates want our support, refusing money from the people destroying our future is a good place to start.

Varshini Prakash is from Boston and has organized in the climate movement for more than 5 years, leading fossil fuel divestment campaigns on the local and national levels. She is currently the Communications Director for Sunrise.

Stephen O'Hanlon is a proud Pennsylvanian living in Lancaster. He has organized for the past 4 years helping build a powerful progressive movement in Pennsylvania to fight for a government that works for all people, not just a powerful few. He is currently the Pennsylvania Director for Sunrise.