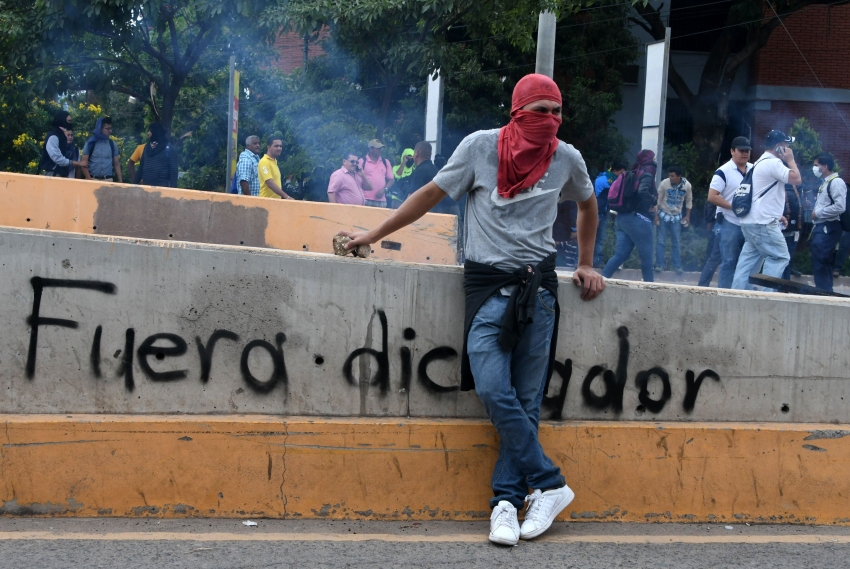 A protester stands next to a graffiti reading "Dictator Out" during demonstrations near the Electoral Supreme Court (TSE) on November 30, 2017. (ORLANDO SIERRA/AFP/Getty Images)

Despite brutal repression, the people of Honduras have resisted the U.S.-backed dictatorship since the 2009 coup d’état.

With the support of the same European and U.S. colonizers as always, the dictator seeks to stay put.

Since elections widely denounced as fraudulent this November, the social movements of Honduras have taken to the streets, confronting violent repression by a Honduran state armed with millions of dollars from U.S. taxpayers. Melissa Cardoza, Honduran feminist and author of 13 Colors of the Honduran Resistance, was in the United States last spring for a book release tour in honor of assassinated Honduran indigenous leader Berta Cáceres. Here she speaks of and to those from grassroots struggles in the U.S. about the current period of unyielding resistance and brutal repression in Honduras. The following essay was translated by Matt Ginsberg-Jaeckle.

Honduras is considered by the U.S. government to be its back yard, its dump, its military base par excellence in the region, the banana plantation that has enriched its businesses with the blood of workers.

There, in the histories of banana exploitation, is one of the origins of the history that we are now living through in this January—full of calls expressing people’s struggles and expressing grief for the lives stolen from us. These are the lives of compatriots who have taken to the streets to say “no” to another brutal coup against the people—this time an electoral coup.

But that history could also be told starting centuries ago, when the ruin that arrived by sea with stories of a singular, punishing god and the inconceivable greed of the white Europeans practically condemned this country to oblivion. Through force and exploitation, relations based on avarice and cruelty in all of their forms developed. It would be the same story centuries later in the mining and banana enclaves, now run by North American bosses.  All that changed through time were the masters.

Through the years as they sought to strengthen a national state, the executives of the United Fruit Company intervened in national politics to the point of investing in the presidential seat and the National Congress.

History teaches. History comes back and shows us scenes that we have lived through and that we often need to recall. On the one hand, there are the sellouts. But on the other are people who dignify us with their actions and words. People from the banana fields who carried out an epic strike in 1954 against that giant of a company, breaking the back of its domination.

In Honduras, since the last days of 2017, those people are writing a new page by hand. The most servile right-wing political and business class in this region organized an electoral fraud to re-install their favorite villain, the wretched Juan Orlando Hernandez (JOH)—the current President who controls all state and legal institutions. Backed by Washington, a coup d’etat was consolidated in 2009 through ballot boxes manipulated by the hands of the National Party, now famous for its ominous acts of corruption. This is part of a long history of national corruption, which has brought the Honduran people to the extremes of disgust. In this way, the current President has declared war on the majority of the people, who have responded to that declaration largely without weapons, with strength and creativity. They are organizing and sustaining peaceful actions replete with determination, anger, memory and an energy that goes beyond that of its current leaders—the politicians who are, for now, part of the opposition.

At the barricades, people scream, “Dictatorship—never again!” and, “Juan Orlando you’re not my President.” Article 3 of the constitution fills their voices: Nobody owes obedience to an imposed government.

The people of Honduras are weary of betting on a democracy that, since its inception, has done nothing but enrich a few families and trap the vast majority of people in a humanitarian emergency. Our society is plagued by unemployment, lack of healthcare, hunger and the constant threat of insecurity.

An important majority of the Honduran people are tired of even the most basic rights being made a mockery—those rights that proponents of democracy love to praise: voting and electing a candidate who reflects some of the desires for wellbeing and peace.

This is happening these days, events in the midst of a people mourning more than 30 assassinations of those who have participated in protests and actions against this imposition—many of them in the north of the country, where the repression against a thoughtful and brave people has turned cruelest. An entire army is in the streets, hunting down men and women who will not accept another fraud.

With the support of the same European and U.S. colonizers as always, the dictator seeks to stay put. The people are set on removing him, sooner or later. The decisions are no longer being made in the usual rooms full of politicians and agreements behind the backs of the majorities. Now things are playing out right there in the preparations for a barricade, the burning of tires to stop traffic, the organizing of a response to repression, the deciding on the words for a statement, the denunciations and chants.

The song that plays over and over again and gives meaning to these times—“JOH, JOH, you’re on your way out”—has not only turned into an international hit but is a new hymn of the resistance that has not stopped since the 2009 coup d’état. In fact, this call has been strengthened by brave and angry Honduran people who have learned how to resist a dictatorship and take matters into their own hands.

Melissa Cardoza is an afro-indigenous journalist, poet, writer and feminist organizer from Honduras. She is the author of the book, 13 Colors of the Honduran Resistance.