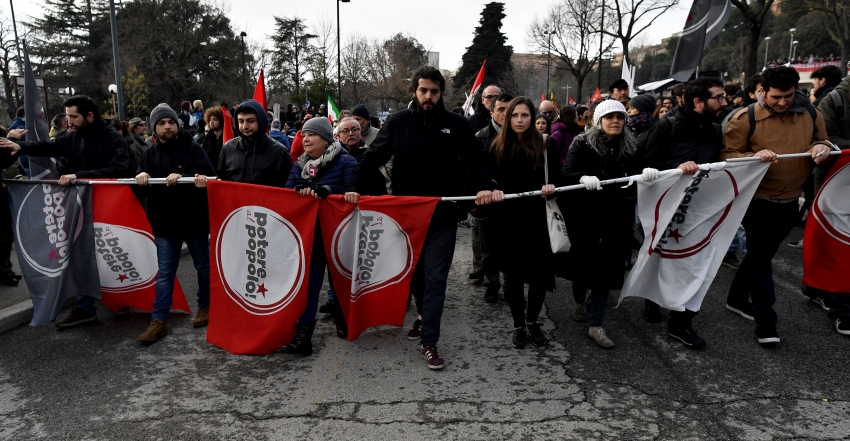 Protesters hold flags of the 'Potere al popolo' (Power to the People) political party, during an anti-racism demonstration one week after an attack that injured at least six migrants, on February 10, 2018 in Macerata. (TIZIANA FABI/AFP/Getty Images)

PAP is the only political formation that explicitly talks about wealth redistribution, with pillars that include a tax on property and a battle against tax evasion aimed at shrinking Italy’s widening inequality gap.

On March 4, the Italian people will walk to the ballots to choose their government for the next five years. During the past few weeks, the TV schedule has been filled with representatives from each running party clashing over the best ways to get the country out of the lingering economic recession: structural reforms, innovation, job creation, more cuts, less cuts and, of course, stopping immigration.

The regular pre-election spectacle is charged with a sense of gravity, as this will be the first time Italian citizens will have the chance to elect their government since the fall of Berlusconi in 2011.

After the defeat of Le Pen’s far-right party by the liberal, pro-austerity party of Macron in France, lawmakers, international organizations and investors across Europe are watching with bated breath to see whether Italian voters reject the far Right and its anti-Europe discourse. On the other hand, some observers worry that the elections could result in a hung parliament that will yet again be resolved by the formation of a government of technocrats in charge of carrying forward the austerity mandate as their predecessors did.

Yet, a new left coalition is presenting a third option. Potere Al Popolo (Power to the People or PAP) is articulating a political platform that breaks through the dreadful dichotomy between the anti-austerity, xenophobic Right and the pro-European, liberal “Left.” With years of involvement in labor and community organizing behind it, PAP has entered the political arena and resuscitated debates about inequality and worker protection—topics that have been set aside by parties across the entire political spectrum to favor the smooth implementation of structural reforms. By bringing a network of grassroots organizations into electoral politics, PAP demonstrates how building a popular party of the Left is possible.

So far, the electoral debate has been dominated by the Right, whose coalition list has secured between 34 and 38 percent of votes, as predicted by the final February 16 pre-election polls. The Democratic Party, currently the main force on the parliamentary Center-Left, is losing ground to the Five Star Movement, the anti-establishment party that grew out of the anti-Berlusconi protests from 2008 to 2011. The Five Star Movement is polling as the largest single party, with roughly 28 percent of the votes. Thanks to a political platform imbued with contradictions, this catch-all party has managed so far to attract votes from portions of both the left and right electorate.

At 22 to 25 percent, and mutilated by constant internal fractions, the Democratic Party appears to be suffering a terminal crisis. Amid increasing social tensions over austerity and immigration, it is proving unable to assert itself as the opposing force against cuts to public spending. On the contrary, the Democratic Party has actively implemented structural reforms, such as the Fornero reform of the pension system and Renzi’s Jobs Act—which first deepened and then extended poverty and job insecurity across all layers of the workforce. In addition, the Democratic Party has gradually abandoned any discussion of wealth distribution, opting instead to adopt a right-leaning narrative that depicts the unemployed as “choosy,” and those who try to articulate a critique of austerity  as “irresponsible.”

Paralleling the trajectory of many other liberal parties across Europe and the United States, the Democratic Party has failed to speak to those who have endured more than eight years of economic recession. This shortcoming has flooded parties of the Right with a new constituency, while leaving the precarious youth, low-income pensioners and the unemployed with no political harbor.

Just as in the United States, the long-lasting absence of a real Left in the Italian parliament has also forced social movements, activists and organizers to think about how to be a different kind of Left: one that does not abandon its mission for social justice in favor of a neoliberal agenda. In the past, most of this thinking has led social movements to operate outside of the political arena—in the social centers and the streets.

The aftermath of the debt crisis saw the emergence of the unrepresentables—the people who are not and cannot be represented by the Democratic Party, which made their jobs precarious and cut their access to good healthcare, education and pensions. Many of these unrepresentables flocked to the Five Star Movement, a party born to channel the indignados and Occupy-type discontent that exploded in mass protests between 2008 and 2011. Yet the party has no real analysis of the crisis that goes beyond condemning the corruption of the political class. As the Five Star Movement sheds its original social movement elements, it increasingly shows signs of a drift to the Right, as exemplified by its “Zero Boats” program on immigration.

PAP’s path from the streets to elections

It is in this context of aimless straying of the parliamentary Left away from the “real country”—a common term that refers to the ordinary people who struggle to make ends meet—that PAP has emerged as a new force that claims to be the only political representative of the wretched of the country. Officially founded in December 2017, PAP was born as the political embodiment of almost a decade of grassroots organizing.

At the core of the coalition is the group of activists around Je So’ Pazzo, a community space in the heart of Naples. Previously a psychiatric hospital-prison, the building was occupied in March 2015, and since then hundreds of people have volunteered at the center to “turn the prison into freedom,” as one of the center’s slogans goes.

Participants are pursuing dozens of activities to fight precarious employment, poverty and racism. The list of services that the space offers completely free of charge is extraordinary, ranging from a medical center that has served hundreds of people in the past year to an after-school program for young people who would otherwise be in the streets and vulnerable to the organized crime that still plagues the city. The center also provides legal-support services for precarious workers and immigrants.

What differentiates Je So’ Pazzo from a charity, though, is that all these activities—while oriented to provide much needed relief to the people in Naples—are offered in a space that actively organizes those individual issues into campaigns. The center has been supporting workplace battles across the country since 2011 through the work of its parent group Clash City Workers. (Disclosure: This author was formerly part of Clash City Workers.)

“I used to be a member of groups that would stand outside the FIAT plant, fliers in our hands, telling the workers how they were being exploited,” Viola Carofalo, one of the long-term activists of Je So’ Pazzo and political leader of PAP, said in an interview with the political satirist Sabina Guzzanti. “The workers didn’t care. They did not want you to stand outside their workplace to teach them about their problems. It’s when we started asking them ‘what do you need?’ that everything changed, and we started to win.”

By doing work that was deeply inspired by the Black Panthers’ community programs, the members of Je So’ Pazzo have learned that the radical Left today needs to “operate over and within this world, and avoid postponing it all to the utopia, by developing the capacity to improve people’s lives here and now,” as put by member, Gianpiero Laurenzano, now a candidate for PAP in Naples. But to be a real force, activists of Je So’ Pazzo knew that the mandatory next step was to build a party. And so PAP was born.

As stated in their electoral program, PAP decided to run for these elections “by doing everything upside down”—building its political program and list of candidates through 150 public assemblies held across the country.

Giving voice to the unrepresentables

PAP is the only political formation that explicitly talks about wealth redistribution, with pillars that include a tax on property and a battle against tax evasion aimed at shrinking Italy’s widening inequality gap. While attacking the wealth of the rich, PAP is determined to fight the European austerity dictates by re-channeling public spending into social welfare. The party also aims to decrease military spending by breaking away from NATO’s fetters.

PAP puts worker protection at the center of its political agenda, fighting the structural reforms of the labor market and the cuts to public spending that have been implemented since the offset of the crisis. By forming alliances with similar parties across Europe, such as Mélenchon’s La France Insoumise, PAP hopes to re-define the European Union as a structure aimed at enhancing the rights of workers, migrants and all people, rather than being a mechanism of wage compression and border patrolling.

The Democratic Party is attempting to avoid taking a position on the pivotal question of immigration, as exemplified by the party’s electoral program, which in 43 pages only mentions the word “immigration” once. In contrast, PAP is proud to assert the principles of anti-fascism and anti-racism. In its program, PAP calls for the immediate “stop to the emergency and militarized management of immigration” and the repeal of the 2001 Bossi-Fini law that made immigration a crime by creating the category of “clandestino.”

By virtue of its grassroots formation and its novelty, PAP is still a very small political force: Many doubt it will reach the 3 percent of votes threshold to get any representatives in parliament. To those who question the significance of its project, PAP says that “for us, elections are a means to an end, not an end itself.” The coalition’s goal is to recompose the Left into a united front by showing people that they have power to affect change.

PAP is demonstrating to the world that a real party of the Left must be built from the ground—and that process requires Party members to become the real interlocutors of the people. This bet is for the long-term. Invited to the newscast TG7 on Feb. 12, Carofalo was asked, “You are aware you will not win the elections, so what’s the point?” She responded: “Of course, we’ll win the next ones.”

Valentina Dallona is a PhD student in the Department of Sociology at Johns Hopkins University in Baltimore, where she studies fascism, labor movements and the politics of the austerity. Before moving to the US, she was a member of the Clash City Workers collective in Italy.