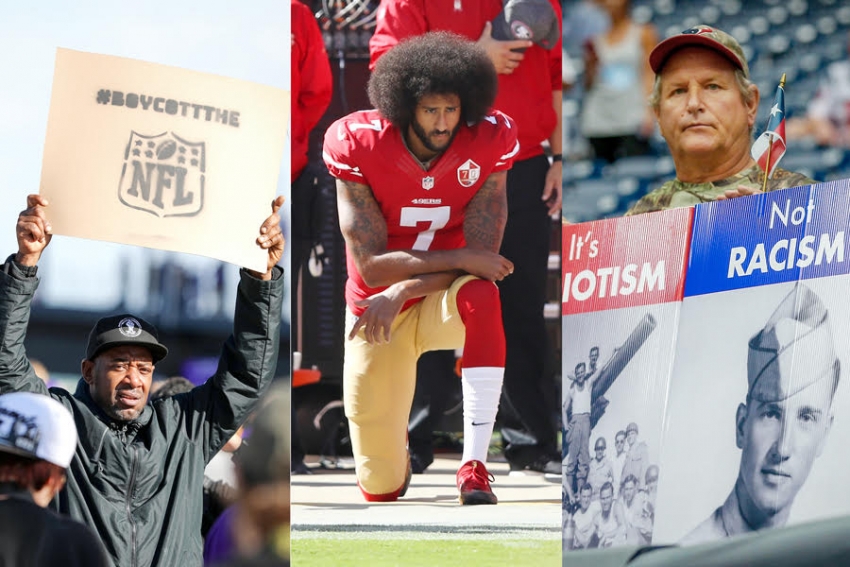 Trump Wants a Football League Where Nobody Kneels. Vince McMahon Is Making That a Reality.

There’s a distinctly American culture surrounding football: People watch with their families over Thanksgiving, throw parties for the Super Bowl, tailgate before games. And—while some sports (the NBA, for instance) tend to have left-leaning fans, and others (think NASCAR) find most of their viewers in red states—the NFL tends to be popular across the political spectrum. Perhaps that’s what made the league’s recent string of player protests so divisive.

Then-San Francisco 49ers quarterback Colin Kaepernick rocked the sports world in August 2016 by kneeling during the national anthem to protest white supremacy. Soon, NFL players across the country were taking a knee before each game. Support was widespread, but so was opposition: Kneeling was condemned as “unpatriotic,” the American Veterans organization called to boycott this year’s Super Bowl and enraged fans on both sides boycotted the whole season. President Donald Trump called the league “weak and out of control” for failing to crack down on kneelers.

At least part of the objection from Trump and the Right seems to be that workers—in particular, workers of color—are standing up for themselves, speaking out beyond their role as entertainers. In a September 2017 speech, Trump once again called for action: “Wouldn’t you love to see one of these NFL owners, when somebody disrespects our flag, to say, ‘Get that son of a bitch off the field, he’s fired’?”

Enter Vince McMahon. On January 25, the World Wrestling Entertainment (WWE) chairman and CEO (and Trump supporter) announced the revival of his once-defunct football league, the XFL. The wrestling mogul said the league, launching in 2020, will be “nonpartisan” and keep politics off the gridiron. League spokesperson Lou D’Ermilio, in an email to In These Times, made the league’s position clear: “Players will be required to stand for the National Anthem.”

The league will also ban players with a criminal record, and all eight teams will be owned by the newly formed Alpha Entertainment LLC, a company McMahon started with the $100 million he received from selling 3.34 million WWE shares.

It is likely no coincidence that the company’s name comes from the first letter of the Greek alphabet, meaning “dominant.” While Trump calls the NFL “out of control,” McMahon seems to be positioning himself to have total control over his league. At hand is a question of workers’ speech, freedom and power, and as in all industries, those things are best achieved through unions.

The NFL, founded in 1920, was free to take advantage of players until 1956, when the NFL Players Association (NFLPA) was formed. The Association called for a minimum yearly salary, continued payment for injured players and for teams to pay for athletes’ equipment. In 1968, NFL players went on strike over the league’s paltry pension plan, leading to the first collective bargaining agreement. The NFLPA continues to advocate for players around pay, player suspensions and more.

In December 2017, The World Players Association—which includes 100 organizations representing 85,000 athletes, including the NFLPA—issued “The Universal Declaration of Players Rights,” a 17-article document calling for the protection of free speech and the right to unionize. Amidst the backlash to kneeling players, NFLPA executive director DeMaurice Smith made clear the issue’s significance: “It’s reminding everyone that where we start in this process is the men and women who play sports did not choose to give up the basic human rights that we would want for every worker.”

Whether McMahon’s XFL will acknowledge such a declaration is to be determined, and Lou D’Ermilio says the new XFL has yet to finalize its plans for “player relations … and contracts.” But McMahon’s history as a union buster gives little reason for hope.

McMahon is a personality well-known to wrestling fans. He presents himself as a villain, someone you love to hate. His WWE bio portrays an inflated ego comparable to Trump’s: “The Chairman has built his empire ruthlessly and efficiently, dispatching all who stand in the way of his entertainment sovereignty—from Ted Turner and WCW to HBK and God.” Industry insiders, however, know this persona is hardly parody—wrestler “Pretty Boy” Doug Somers called him “a billion-dollar jerk.”

McMahon, like Trump, built on the successes of his father. In 1972, he started working at his father’s company, Capitol Wrestling Corporation (CWC), founded 20 years prior by his grandfather. A decade later, McMahon purchased the CWC and took the operation national. The organization became the largest wrestling organization in the world, but despite millions of dollars generated from TV deals, ticket sales for live events and merchandising, WWE athletes operate on a precarious contractual basis.

Because WWE wrestlers are hired as independent contractors, the WWE does not pay into their Medicare, Social Security or unemployment insurance. The athletes are also responsible for their own health insurance, personal training and travel expenses. As writer Oliver Bateman noted in Al-Jazeera America, “WWE’s value as a Wall Street investment has always come at a high cost in human capital.”

One of the major misconceptions about the WWE is that, because it is scripted, wrestlers are not subject to real danger. The soap opera narratives and cartoonish posturing may be theater, but the numerous cases of physical injury suffered by wrestlers are very real. In fact, retired professional wrestlers have a dramatically higher mortality rate than other athletes, including football players. While some athletes have attempted to raise the issue of poor working conditions, they have largely been ignored or pressured into silence by McMahon’s team of litigators.

In the spring of 1987, WWE Hall of Fame inductee Jesse “The Body” Ventura (who would later be elected governor of Minnesota) met with fellow wrestlers in the locker room before WrestleMania 2 in an attempt to rally them into unionizing. Ventura was incensed over having to pay for his own health insurance. As he wrote in his 1999 autobiography, I Ain’t Got Time to Bleed, “Wrestling operated under some of the most unfair working conditions in the country.”

Not all wrestlers were enthusiastic about Ventura’s call, including Hulk Hogan (real name Terry Bollea), who Ventura claims “ratted” to McMahon about it. The campaign never took off, and to this day, the WWE has never been unionized.

A more recent WWE personality to challenge worker exploitation—one of many—is Ashley Massaro (released from her contract in 2008), who, in November 2016, joined a class-action lawsuit against the WWE for concealing the hazards of repeated head injuries, among other grievances. During Massaro’s career, she suffered from concussions, a hairline fracture of the spine, two herniated disks and an ankle fracture. She now also suffers from anxiety, depression, memory loss and chronic migraines.

McMahon likes to boast that he is a “tireless supporter of the U.S. military,” bringing the WWE into warzones in Afghanistan and Iraq to entertain the troops. It was during a 2006 stop in Kuwait where, according to Massaro, she was sexually assaulted at a U.S. military base. Massaro reported the assault to WWE executives who, she alleges, apologized “for the negligence, but persuaded her that it would be best not to report it to appropriate authorities.”

The original XFL league, begun in 2001 as a joint effort between the World Wrestling Federation (now WWE) and NBC, saw similar exploitation. McMahon sought to reimagine professional football by loosening the rules to maximize entertainment.

The league emphasized violence on the field, turning the football stadium into a latter-day Roman coliseum. Advertising promised “risky plays, fearless tackles and … no fair catches.” Team names included the Enforcers, Rage, Hitmen, Outlaws, Demons, Maniax and Xtreme. It was a league made for people like Trump, who has insisted that players “want to hit,” lamenting that penalties for unnecessary violence are “ruining the game.”

Another peculiar aspect was the league’s focus on scantily clad cheerleaders who were urged by league officials to flirt with players and featured on TV ads titillating audiences about “wild and crazy times” in their locker rooms.

After a promising start—the inaugural game had a viewership of 14 million—ratings began to plummet, perhaps in part due to backlash against the sex and violence, perhaps because the games simply weren’t very exciting. NBC decided against broadcasting a second season and the XFL seemed destined for the ash-heap of sports history.

In some ways, the new XFL looks improved. According to Lou D’Ermilio, “XFL 2020 isn’t planning to have cheerleaders” in order to focus on the game itself. He also claims there will be “an advisory board of medical and safety experts.”

Plus: no kneeling, no politics. “People don’t want social and political issues coming into play when they are trying to be entertained,” McMahon said.

McMahon has no such compunctions in his daily life. He and his wife Linda McMahon (a former CEO of WWE) use their financial influence to support anti-worker politicians, donating large sums to the Republican Party and GOP candidates. The Center for Responsive Politics discovered that, from 2011 to 2015, Vince contributed a combined $273,755 to the Republican National Committee and Restore Our Future, a PAC supporting billionaire Mitt Romney’s 2012 presidential campaign. Linda ran for the U.S. Senate seat from Connecticut in 2009 and 2012 as a Republican, losing both races. In 2016, she donated $7.5 million to Trump’s campaign, and was selected by Trump to head the Small Business Administration in 2017. The McMahons have also donated $5 million to the Donald J. Trump Foundation.

The McMahons’ efforts show where they stand in Trump’s America: against workers, the very people they presumably want as WWE and XFL fans.

Trump himself has appeared with McMahon at WWE events, including the televised 2007 match, “The Battle of the Billionaires.” For the billionaire bosses, contact sports are all fun and games, little more than spectacle. But to keep the show running, they rule the workplace with an iron fist, denying power to the athletes who risk life and limb to make the contest possible.

The new “family-friendly” XFL claims to be nonpolitical, and McMahon even said he has “no idea” if Trump will like it. But while the revamped league may not share its predecessors’ flamboyance, it looks aimed at filling the same social function: bread and circuses.

Mike Kuhlenbeck is a journalist, researcher and National Writers Union member based in Des Moines, Iowa. His articles have appeared in The Progressive Populist, Workers World, Little Village, The Humanist and San Francisco Bay View.