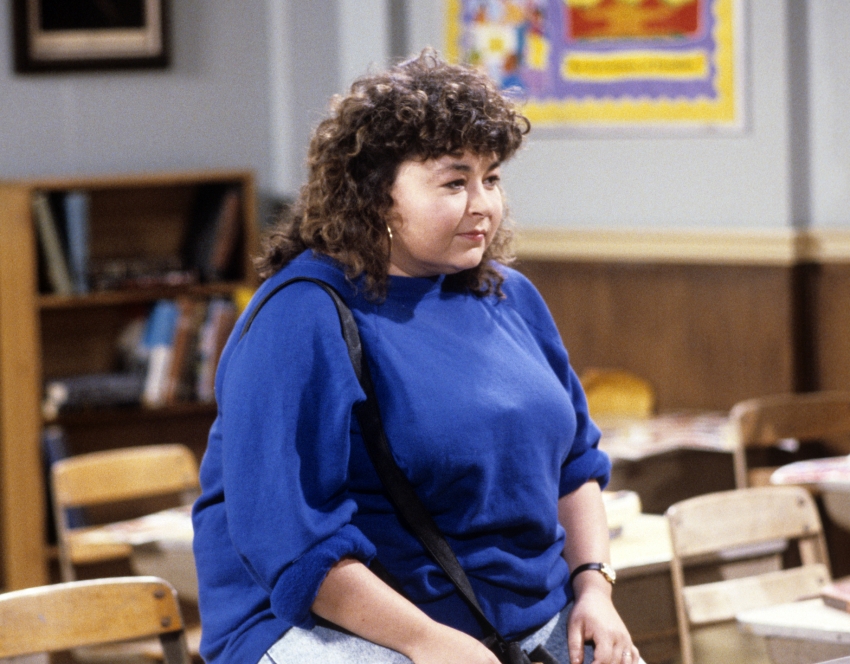 Roseanne Barr is a messy, complicated and contradictory person. (ABC)

Can We Have ’90s Roseanne Back, Please?

We need the old Roseanne’s working-class heroism now more than ever. We’re better off with the reruns than the reboot.

Roseanne combined a common-sense egalitarianism with a strong feminist streak, lifting a middle finger to the powers that be—bosses especially.

Roseanne’s white working-class populism seems somehow suspended in time. Set for a revival on ABC this spring, the hit 1988-to1997 sitcom sat, politically, somewhere alongside Dolly Parton’s 9 to 5 and Odd Jobs and Bruce Springsteen’s entire discography. In the late 1980s it wasn’t impossible to imagine some combination of Springsteen, Barr and Parton galvanizing the white working class toward solidaristic ends, within the confines of something like Jesse Jackson’s multi-racial Rainbow Coalition.

History took another course. As Roseanne Barr has argued in press junkets for the upcoming tenth season, members of her fictional exurban Illinois family on the show, the Conners, might well have voted for Donald Trump in 2016—as Barr proudly did.

So what are we to make of Roseanne and Roseanne in 2018, the beloved working-class heroine turned Trump supporter?

The series’ revival comes as journalists based on the coasts take safaris into Trump country to interview families not unlike the Conners, looking to anthropologically explore what makes mythical white, working-class Republican voters tick: Are they economically anxious or simply racist?

Whatever the new Roseanne brings, the series’ original run remains a valuable intervention to upend the stereotypes behind the debate. Working-class whites have long been depicted as politically backward and confused. At its best, Roseanne skewered the idea that people’s poverty is of their own making, or that families that float around the poverty line could be slotted into neat stereotypes.

When it premiered, Roseanne gave viewers something messy and relatable. The show set standard primetime household hijinks against a backdrop where problems were rarely solved in a night. Unlike other “blue-collar” sitcoms like Married With Children and All in the Family, the characters weren’t cartoonish parodies to be laughed at. The Conners were the joke-tellers, not the jokes.

Eminently human, they faced issues that went beyond usual sitcom fare. Businesses failed, unplanned pregnancies arose and boyfriends abused their girlfriends. Characters cycled through bad jobs and bouts of unemployment, dieting and depression while struggling to pay the bills—the latter so often that it’s a running gag. One scene finds Roseanne (Barr) and Dan Conner (John Goodman) sitting at their kitchen table tallying monthly payments. When they’re all paid up, Dan laments, they’ll have just $11.87 left in the bank.

“Well, do you want extra money?” Roseanne quips, “’cause, y’know, I have my own system … First we send in the phone bill and we forget to sign the check. … Then we send the water bill to the electric company and the electric bill to the water company. … And you know that charge card bill? It never even showed up.”

Roseanne combined a common-sense egalitarianism with a strong feminist streak, lifting a middle finger to the powers that be—bosses especially.

The first season finale finds Roseanne and her female coworkers at a plastics assembly line, commiserating on lunch break about their sexist, domineering boss, Keith Faber (Fred Thompson). “Faber wouldn’t get on my nerves so much if he’d just … die,” Roseanne’s sister and co-worker, Jackie, says. “No, that’s too good for him,” another says.

Roseanne confronts Faber on her own about unrealistic production quotas, and he makes her pledge loyalty and subservience in exchange for lower quotas. “He said he’d lower the quotas if I lowered myself,” she confesses to Dan later, prompting a conversation about what quitting would entail giving up, including healthcare. Faber soon goes back on the deal and raises the quota. “Because I can,” he explains. The final scene shows the women on the floor following Roseanne’s lead and clocking out for good.

In another scene, Roseanne and Jackie pick up a hitchhiker who teaches them about riot grrrl—early ’90s feminist punk rock. Spotting a truck decked out in sexist paraphernalia, they pull up and get in a shouting match with the male driver. “We’ll show him a little Bikini Kill,” Roseanne says (referencing a riot grrrl band) and flips him off, after which Jackie unleashes a string of expletives and Roseanne yells, “Women rule, dirtbag!”

While dealing with weighty subjects, Barr’s biting, rapid-fire wit kept the show from turning saccharine. At one point Roseanne leads her mortified daughter Darlene’s home economics class on a field trip to the grocery store to learn about shopping on a budget. Picking up a box of corn flakes, she advises: “We have to go for the generic. It’s nothing but second-best for our family!”

Later, Darlene approaches her mother. “I learned something kind of important today,” she says earnestly. “Your job is important and it’s tough. So I’m going to make a lot of money or I’m going to marry a rich guy so I don’t have to do any of it.” Roseanne tenderly lifts Darlene’s chin. “Ah,” she deadpans, “the student surpasses the teacher.”

Since Roseanne went off the air, Barr’s politics have been all over the map: She ran for president on the Peace and Freedom Party line in 2012, telling Sean Hannity, “We need a little bit more socialism in this country.” But in recent years, she’s accosted pro-Palestinian activists on Twitter and spoken at anti Boycott, Divestment, Sanctions (BDS) conferences, and in 2016 she vocally supported Trump for president.

Barr has justified her titular character’s Trump support on the basis of realism, a statistically questionable claim: Trump enjoyed his strongest support overall from white, middle-class voters making significantly more than the average American—the kinds of snooty, uptight neighbors and parents the Conners often clashed with.

It’s hard to separate art from artist, especially when the two are so closely bound. Roseanne Barr is a messy, complicated and contradictory person. Roseanne depicted a messy, complicated and contradictory family. Regardless of the quality of the reboot, the reruns remain worth watching—especially any time you find yourself tempted to read another thinkpiece on the white working class.