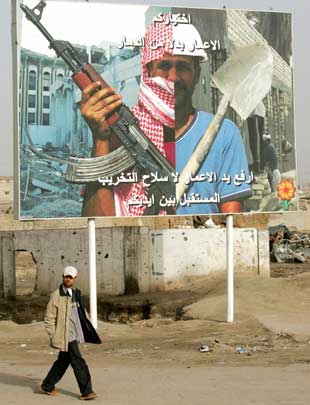 A billboard in Basra reads "Raise your hand for reconstruction, not a weapon of destruction."

How to End the War

The following essay is adapted from remarks made at the National Teach-in on Iraq sponsored by the Institute for Policy Studies in Washington, D.C. The teach-in was held on March 24, the 40th anniversary of the first teach-in on the Vietnam War, which was held at the University of Michigan, Ann Arbor.

The central question we need to answer is this: What were the real reasons for the Bush administration’s invasion and occupation of Iraq?

When we identify why we really went to war–not the cover reasons or the rebranded reasons, freedom and democracy, but the real reasons–then we can become more effective anti-war activists. The most effective and strategic way to stop this occupation and prevent future wars is to deny the people who wage these wars their spoils–to make war unprofitable. And we can’t do that unless we effectively identify the goals of war.

I saw bulldozers in military bases. I saw bulldozers in the Green Zone, where a huge amount of construction was going on, building up Bechtel’s headquarters and getting the new U.S. embassy ready. There was also a ton of construction going on at all of the U.S. military bases. But, on the streets of Baghdad, the former ministry buildings are absolutely untouched. They hadn’t even cleared away the rubble, let alone started the reconstruction process.

The one crane I saw in the streets of Baghdad was hoisting an advertising billboard. One of the surreal things about Baghdad is that the old city lies in ruins, yet there are these shiny new billboards advertising the glories of the global economy. And the message is: “Everything you were before isn’t worth rebuilding.” We’re going to import a brand-new country. It is the Iraq version of the “Extreme Makeover.”

It’s not a coincidence that Americans were at home watching this explosion of extreme reality television shows where people’s bodies were being surgically remade and their homes were being bulldozed and reconstituted. The message of these shows is: Everything you are now, everything you own, everything you do sucks. We’re going to completely erase it and rebuild it with a team of experts. You just go limp and let the experts take over. That is exactly what “Extreme Makover:Iraq” is.

There was no role for Iraqis in this process. It was all foreign companies modernizing the country. Iraqis with engineering Ph.D.s who built their electricity system and who built their telephone system had no place in the reconstruction process.

If we want to know what the goals of the war are, we have to look at what Paul Bremer did when he first arrived in Iraq. He laid off 500,000 people, 400,000 of whom were soldiers. And he shredded Iraq’s constitution and wrote a series of economic laws that the The Economist described as “the wish list of foreign investors.”

Basically, Iraq has been turned into a laboratory for the radical free-market policies that the American Enterprise Institute and the Cato Institute dream about in Washington, D.C., but are only able to impose in relative slow motion here at home.

So we just have to examine the Bush administration’s policies and actions. We don’t have to wield secret documents or massive conspiracy theories. We have to look at the fact that they built enduring military bases and didn’t rebuild the country. Their very first act was to protect the oil ministry leaving the the rest of the country to burn–to which Secretary of Defense Donald Rumsfeld responded: “Stuff happens.” Theirs was an almost apocalyptic glee in allowing Iraq to burn. They let the country be erased, leaving a blank slate that they could rebuild in their image This was the goal of the war.

The administration says the war was about fighting for democracy. That was the big lie they resorted to when they were caught in the other lies. But it’s a different kind of a lie in the sense that it’s a useful lie. The lie that the United States invaded Iraq to bring freedom and democracy not just to Iraq but, as it turns out, to the whole world, is tremendously useful–because we can first expose it as a lie and then we can join with Iraqis to try to make it true. So it disturbs me that a lot of progressives are afraid to use the language of democracy now that George W. Bush is using it. We are somehow giving up on the most powerful emancipatory ideas ever created, of self-determination, liberation and democracy.

And it’s absolutely crucial not to let Bush get away with stealing and defaming these ideas–they are too important.

Why? Because if genuine democracy ever came to Iraq, the real goals of the war–control over oil, support for Israel, the construction of enduring military bases, the privatization of the entire economy–would all be lost. Why? Because Iraqis don’t want them and they don’t agree with them. They have said it over and over again–first in opinion polls, which is why the Bush administration broke its original promise to have elections within months of the invasion. I believe Paul Wolfowitz genuinely thought that Iraqis would respond like the contestants on a reality TV show and say: “Oh my God. Thank you for my brand-new shiny country.” They didn’t. They protested that 500,000 people had lost their jobs. They protested the fact that they were being shut out of the reconstruction of their own country, and they made it clear they didn’t want permanent U.S. bases.