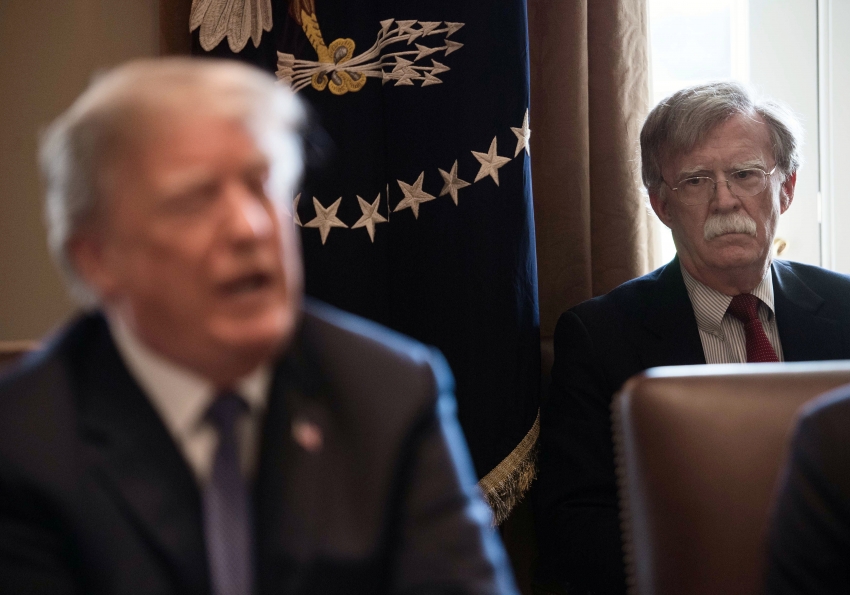 We Must Stop John Bolton From Escalating War in Syria

Trump’s threats to escalate military intervention could open a new, dangerous front in the ongoing conflict.

Today, fanatic war proponent John Bolton is taking office as President Donald Trump’s National Security Adviser—and it comes at a perilous moment for international security. The volatile situation in Syria significantly raises the danger of a major intensification of direct U.S. military involvement. Over the weekend, the opposition's extremist Jaish al-Islam group reached a deal with the government to leave its territory, paving the way for the Damascus regime to reclaim control over Douma, the last opposition-held area in the capital's suburbs. Following Saturday’s alleged deadly chemical attack on civilians, which Trump immediately blamed on Assad backed by Russia and Iran, Trump said his administration is considering military retaliation, which could come within 24 hours. Early Monday morning saw air strikes on a Syrian military base, possibly carried out by Israel, further escalating the danger of an intensified conflict.

Bolton is a longtime hawk who disparages diplomacy, disdains the United Nations and defends the violation of international law. He recently called for a first-strike attack on North Korea and for abandoning the Iran nuclear deal and replacing diplomatic efforts with amilitary attack, if not all-out war. The current escalation in Syria, including the reprise of chemical weapons allegations (there has still been no confirmation from the Organization for the Prevention of Chemical Weapons regarding what caused the casualties, let alone who was responsible for using them), raises the political stakes and threatens the possibility of new wars.

Trump has suggested that he will hold both Iran and Russia responsible for the alleged Syrian government role in the chemical weapons attack, which gives Bolton an immediate Day One project: to endorse any reckless military move the president might choose, regardless of its deadly consequences. When Bolton first made the outrageous claim nearly 25 years ago that “there is no such thing as the United Nations,” it was shocking. But at that time he was cooling his heels at a right-wing think tank, and he had little power to do anything except talk. That's not true any longer. His op-eds in the New York Times and the Wall Street Journal calling for new wars are now the words of the man who has the first and last words to whisper in this president's ear. That's a terrifying reality for Syrians, Iranians, Koreans and many others around the world. It should also be a terrifying reality for us.

Bolton starts today, with no Senate confirmation required. But his war-mongering, torture-backing collaborators—Mike Pompeo, nominated for Secretary of State, and Gina Haspel, nominated for CIA director)—do need confirmation. These hearings should be turned into forums on the threats of war and—crucially—the complete lack of congressional authorization and hence illegality of the Fcurrent U.S. direct involvement in the Yemen war, or any new threatened war in Iran or North Korea. That also means pushing back against the idea that U.S. air strikes and drone attacks are somehow legal. They are not. And claiming those attacks are revenge for alleged chemical weapons does not make them legal either. Period, full stop.

Some members of Congress argue that the Authorization for the Use of Military Force (AUMF), passed in the days after September 11, 2001 to justify war against al Qaeda and the Taliban in Afghanistan, somehow legalizes war across the Middle East and beyond against organizations that did not even exist when the AUMF was passed. That authorization has been used to justify U.S. strikes against alleged ISIS targets in Syria and Iraq, with large numbers of civilians paying the price. But, so far at least, no one argues that that 17-year-old authority somehow makes it legal for the U.S. to launch direct strikes, meaning going to war, against the Syrian government.

This current situation underscores the danger of that could result from pressuring Trump to show he is tough on Russia—pressure that is coming from some on the right, as well as some on the Democratic Party and the progressive side of the anti-Trump mobilizations. There's little doubt that Russia tried to influence U.S. elections—much as the United States has done for years in countries around the world. Investigating that effort remains important. However, the Russian effort pales before the huge attack on our democracy caused by racist voter suppression, which has a far greater and far more devastating impact on our elections and our democracy than anything dreamed up in Moscow or anywhere else. Escalating legitimate criticism of Russian election meddling efforts to the level of Cold War-style rhetoric we are hearing today raises the threat of U.S. military action against Russia to increasingly dangerous levels. Now we are seeing what might happen when Trump responds to mounting pressure to prove that he too can be confrontational towards Russia and its allies. And it's very dangerous.

Even “limited” military engagements such as a no-fly zone, which some Syrians facing devastating bombing campaigns by the regime have understandably have called for, never stay limited. Back in 2011, when the U.S. was debating establishing a no-fly zone over Libya ostensibly to protect civilians, it was then-Defense Secretary Robert Gates who said, “Let’s just call a spade a spade. A no-fly zone begins with an attack on Libya to destroy the air defenses. That’s the way you do a no-fly zone. And then you can fly planes around the country and not worry about our guys being shot down. But that’s the way it starts.” And we know what happened in Libya–protecting civilians was not the result. Syria’s air defenses, backed by Russia, are far more robust than Libya’s ever were.

A U.S. war against Syria would also be a war against Syria's allies, Iran and Russia. Such a war—with or without Washington's allies Israel, Saudi Arabia, Jordan, the UAE and more—has the potential to escalate into full-scale global war. A war between the two largest nuclear weapons powers, the United States and Russia, might not turn into a nuclear war. But it might.

According to the British monitoring agency Airwars, U.S.-led coalition airstrikes have already killed between 3,640 and 5,637 Syrian civilians since the U.S. began bombing Syria in 2014. If none of the apocalyptic scenarios of regional war come true, an escalated U.S. war in Syria will still kill even more Syrians every day.

Moving to stop a new front in the war now is more urgent than ever—before any of those scenarios come to pass.

A version of this article appeared on Common Dreams.