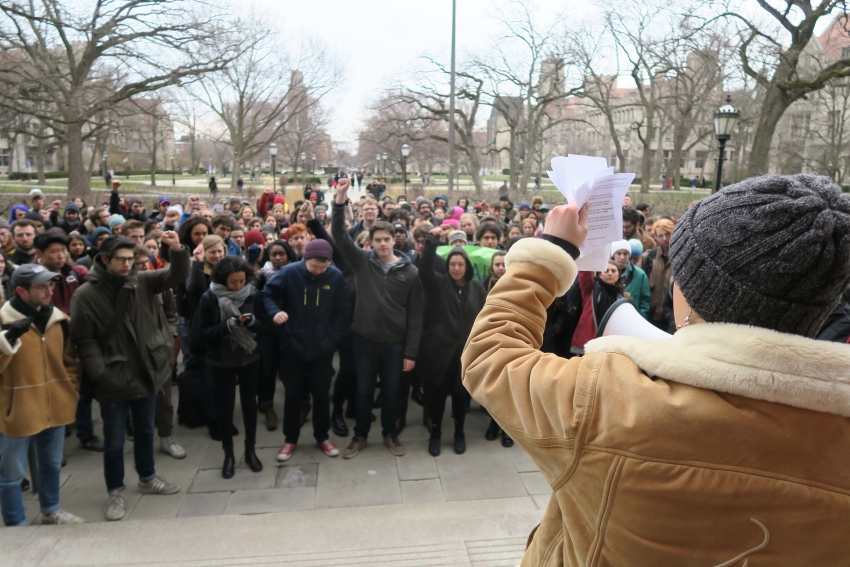 Nearly 200 people chanted “No Justice, No Peace! No racist police!” at a rally demanding the University of Chicago Police Department be disarmed after one of its officers shot student Charles Thomas while he was experiencing a mental health crisis. (Alex V. Hernandez)

Police shot student Charles Thomas last week while he was in the grips of an apparent mental health crisis.

“He’s not the first student to have suffered injury at someone else’s hands as a result of mental health problems that have occurred on this campus."

A frigid wind cut through the crowd gathered last Friday at the University of Chicago where nearly 200 people chanted “No Justice, No Peace! No racist police!” The rally, which made its way across campus, was organized by UChicago United, a coalition of multicultural student organizations formed to make the university more inclusive of students from marginalized backgrounds. The students gathered to demand the University of Chicago Police Department (UCPD) be disarmed after one of its officers shot Charles Thomas last week, while he was experiencing a mental health crisis.

“This campus is notorious for its poor handling of mental health, especially when it’s causing a lot of these issues due to the high stress environment,” Daniel Lastres, a student at the university and Thomas’ roommate, told In These Times. “He’s not the first student to have suffered injury at someone else’s hands as a result of mental health problems that have occurred on this campus. And frankly, there’s been long-standing calls to demand adequate funding for student counseling services that have not been acknowledged or acted on.”

Lastres said students only get a handful of appointments with “woefully understaffed” campus counselling services before being asked to go seek help elsewhere. According to protesters, in a vacuum of support, police make mental health crises even more dangerous.

In video released by the university, armed UCPD officers are seen driving their patrol vehicle up to 21-year-old Thomas, who was in an alley in the 5300 block of South Kimbark Avenue, around 10:15 p.m. The police say they were responding to a call of a burglary in progress.

It appears at least one officer knew Thomas was in the grips of a mental health crisis. Body and dash camera footage of the April 3 shooting released by the university show an unidentified officer in the lead police vehicle responding to the call. “He’s a mental,” the officer said, before exiting the vehicle to confront Thomas.

Police shot Thomas, who is biracial, in the shoulder, breaking his shoulder blade. After being shot, he was chained to his hospital bed put under private guard, with only his mother allowed to visit him at Northwestern Memorial Hospital, Lastres says.

Kathleen Thomas, Charles’ mother, told Chicago Maroon that she believes her son was having some sort of psychiatric or manic episode. She explained that her family has a history of bipolar disorder but added that she hadn’t experienced any of the behavior her son displayed on the police footage the night he was shot.

Guy Emerson Mount, one of Thomas’ professors, told In These Timesthat the shooting of his student is symptomatic of the broader institutional problems inherent in current policing and criminal legal systems.

“We live in a punitive justice system … that says property is more important than people,” he said. “And that the duty of the state is to protect property, and human beings are in many ways secondary to that.”

Page May, the founder of Assata's Daughters and who used to live in Hyde Park, told In These Timesthat when the UCPD arrests, stops or searches people, these measures have no basis in real campus safety. She recalled one instance when a group of 12-year-olds was enjoying the day in Hyde Park because of its public green spaces and UCPD officers stopped and started arresting them.

“These kids were 12-years-old. I couldn’t believe it,” said May.

In May’s view, UCPD seems to be more focused on prioritizing the university’s real estate investments as it continues to expand its campus into Chicago’s Black Belt.

“The charges filed against the student were filed by the Chicago Police Department. CPD is the agency who is leading the investigation,” Marielle Sainvilus, a spokesperson for the university, told In These Times.

In a statement, CPD said its officers are “conducting the underlying criminal investigation” while the university is “handling the administrative use of force investigation.”

The university released a statement saying that representatives at its offices of Campus and Student Life and the Student Counseling Service are “always available to meet with student groups to discuss their questions, concerns, and ways of enhancing counseling and health services.” The university claims about 85 percent of its armed police have received 40 hours of Crisis Intervention Training, including the officer who shot Thomas on April 3.

But some are not reassured by police training. “When you’re talking about training, please just stop,” said May. “When they are shooting you 20 fucking times, or eight, or six times—that’s nothing you can train people out of. That’s rage. That is being anti-Black. You don’t train racism out of people.”

UChicago United released a list of demands that include the disarmament of the UCPD, a reduction of its patrol jurisdiction, the creation of an elected Independent Review Committee and that UCPD comply with the Freedom of Information Act, among other things.

“This was not an isolated incident,” said Alyssa Rodriguez, a student at the university and one of the rally organizers. “UCPD has a long history of harassing, assaulting, and endangering students of color and Black communities. At the same time, both UChicago and the city of Chicago refuse to invest in mental health resources.”