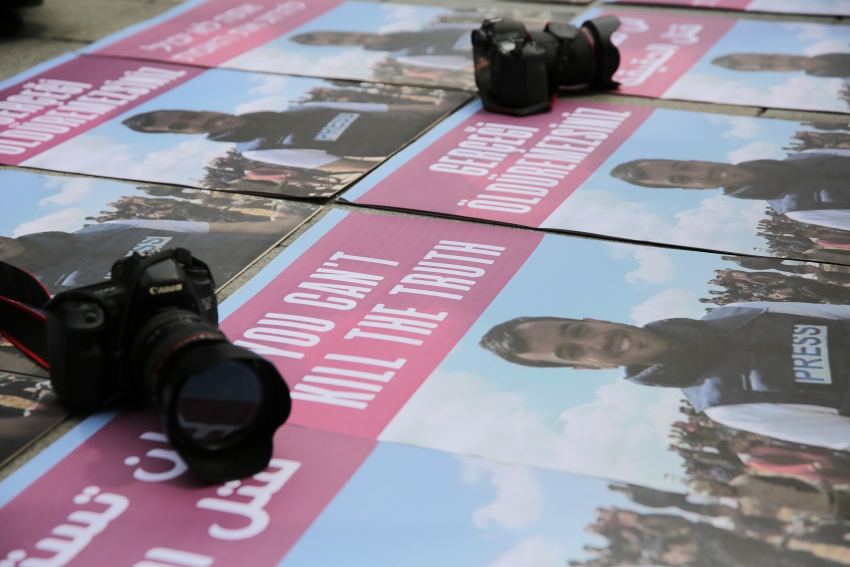 Cameras are laid on banners reading and translating 'You Can't Kill The Truth' during a demonstration in the memory of Yaser Murtaja, a Palestinian reporter who was shot in the abdomen by Israeli troops while covering the 'Great March of Return' and succumbed to his wounds, in front of Galatasaray High School in Istanbul, Turkey on April 11, 2018. (Photo by Munir Zakiroglu/Anadolu Agency/Getty Images)

Yaser Murtaja Was Killed by Israel While Reporting From Gaza. His Death Is One of Many.

Israel has a long-standing pattern of killing Palestinian journalists and attacking media institutions.

"Why are the Israelis using such excessive force against Palestinian civilians and against journalists in particular?”

The last moments of Yaser Murtaja’s life were caught on camera, and the footage shows the 30 year old doing what he had dedicated his life to: journalism that chronicles reality in the Israeli-occupied Gaza Strip.

In a video clip posted by the Quds News Network, a Palestinian media outlet, Murtaja is shown using a video camera to capture a chaotic scene of Palestinian protesters, smoke from tires burning and people screaming.

The next scene shows Murtaja, wearing a jacket with the words PRESS emblazoned on it, on the ground, bleeding. He would later die because of the Israeli-fired gunshot wound.

Murtaja was one of at least six Palestinian journalists shot by Israeli forces on April 6, while covering a protest in the Gaza Strip against Israel’s blockade and denial of Palestinian refugee rights. Israeli soldiers have shot and wounded at least 12 Palestinian journalists since March 30, when Palestinians started a mass protest encampment dubbed the “Great Return March” near Israel’s militarized barrier with Gaza. The march is named for the Palestinian demand that they be allowed to return to lands they and their families were expelled from in 1948—in what is now Israel.

Murtaja was the only Palestinian journalist killed by Israel that day, and his death set off widespread outrage among press freedom groups and human rights advocates.

“The Israeli government killing is a worrying sign. Not only are autocratic and barbaric non-state actors killing journalists, but a country that calls itself a democracy [is also killing journalists],” Sherif Mansour, the Middle East and North Africa Program Coordinator for the Committee to Protect Journalists, told In These Times. “The attempts by Israeli officials to justify this killing is not just putting salt on the wound, but is trying to blur some of the lines that people are trying to establish about safety for journalists in armed conflict.”

Gaza has borne the brunt of Israeli violence in recent years, experiencing three separate Israeli military operations that killed more than 3,700 people just in the past 11 years. And it is in Gaza, a coastal enclave under a devastating blockade by Israel and Egypt, where Israeli forces have opened fire on journalists the most. Since 1992, Israel has killed 15 journalists, most of them Palestinian, according to the Committee to Protect Journalists. Nine of those killed by Israeli fire were working in Gaza, and six were reporting in the occupied West Bank.

Almeghari told In These Times that while reporting on the current wave of protests in Gaza, he met a 19-year-old freelance photographer shot in the leg by Israeli soldiers, an injury that forced doctors to amputate the leg.

“He was lying on his abdomen when he got a gunshot into his leg while he was doing some freelance work,” said Almeghari. “Despite the fact that it was apparent that he was a photographer, Israeli forces shot him in the leg.”

Almeghari added that Israeli targeting of Palestinian journalists may occur because the army wants to “blackout coverage on the ground”—an assertion that is not far-fetched. A recently disclosed Israeli military police investigation found that in 2012, Israeli commanders ordered soldiers to beat and arrest Palestinian journalists to disrupt coverage of anti-occupation protests in the West Bank.

When confronted with outrage over firing on Palestinian journalists, Israeli authorities have turned to a well-worn justification: The journalists were members of Hamas, the armed Palestinian group that rules Gaza.

In the aftermath of Murtaja’s death, Israel’s Defense Minister Avigdor Lieberman said the Palestinian journalist was a captain in the Palestinian militant group. Lieberman offered no evidence for the assertion, and the U.S. State Department said that Murtaja received a USAID grant after being vetted in accordance with U.S. laws that prevent money from going to members of Hamas.

It wasn’t the first time Israel has used an alleged Hamas affiliation to deflect calls for accountability after the killing of a journalist. In 2012, during an Israeli assault on Gaza, an Israeli airstrike targeted and killed Mahmoud al-Kumi and Hussam Salama, two Palestinian cameramen driving in a car marked with the word “TV.” Because they worked for Al-Aqsa TV, the official Hamas television station, Israel said they were legitimate targets—an assertion rejected by Human Rights Watch, which said at the time that “Hamas-run media are protected from attack under the laws of war unless directly taking part in military operations.” The group found no evidence the cameramen played any part in fighting during the 2012 conflict.

“There is a pattern of improper response that basically tries to paint the person as a terrorist. We try to challenge the Israeli authorities on this,” said Mansour of the Committee to Protect Journalists. “Even being affiliated with a Hamas TV station is not enough to kill journalists.”

No press freedom under occupation

Palestinian journalists working in the occupied West Bank must contend with their own unique challenges. In contemporary Gaza, Israel controls most of the borders and Gaza’s air and sea space but does not normally deploy soldiers within the strip. By contrast, Israeli soldiers are present deep into the occupied West Bank.

The 24/7 presence of Israeli soldiers brings them into near-daily contact with Palestinian journalists. And the Israeli army has not hesitated to unleash ammunition and tear gas on Palestinian media workers.

“The Israeli army is deliberate and intentional in its targeting of journalists,” said Issam Al-Rimawi, a Palestinian photo-journalist, in an interview. “They do not want journalists to cover any form of Palestinian protest, not even peaceful demonstrations.”

Al-Rimawi would know. He has been hit by Israeli fire numerous times while covering demonstrations against Israel’s military occupation. In 2014, while photographing a protest near Israel’s Ofer military prison in the West Bank, an Israeli soldier shot him in the shoulder with a rubber-coated steel bullet, an incident that left him hospitalized. In February, Al-Rimawi was again shot by a rubber-coated bullet, this time in the hand.

In the wake of such arrests and military raids, press freedom groups frequently condemn Israeli practices that target Palestinian journalists. But the pressure these groups try to bring on Israel has had little impact on how Israel conducts itself.

This pattern of international condemnation followed by little change in Israeli military behavior is playing out right now, in the aftermath of the killing of Palestinian journalist Yasser Murtaja in Gaza.

One day after an Israeli soldier killed Murtaja, Christophe Deloire, the secretary-general of Reporters Without Borders, called for an “independent investigation leading to the conviction of those responsible for this crime against press freedom.”

But instead of promising to hold the soldier who killed Murtaja accountable, Israeli officials have sought to justify the killing, saying he was a member of Hamas, or that he was flying a drone that endangered Israeli soldiers. (No evidence has emerged for either assertion.) And on April 13, Israeli forces once again opened fire on a journalist in a press jacket, shooting the Palestinian photographer Ahmed Abu Hussein in his abdomen and critically wounding him.

This Israeli response makes it likely that nothing will be done to the soldier who killed Murtaja—making his death just the latest example of how Israeli soldiers kill Palestinian civilians and journalists with impunity.