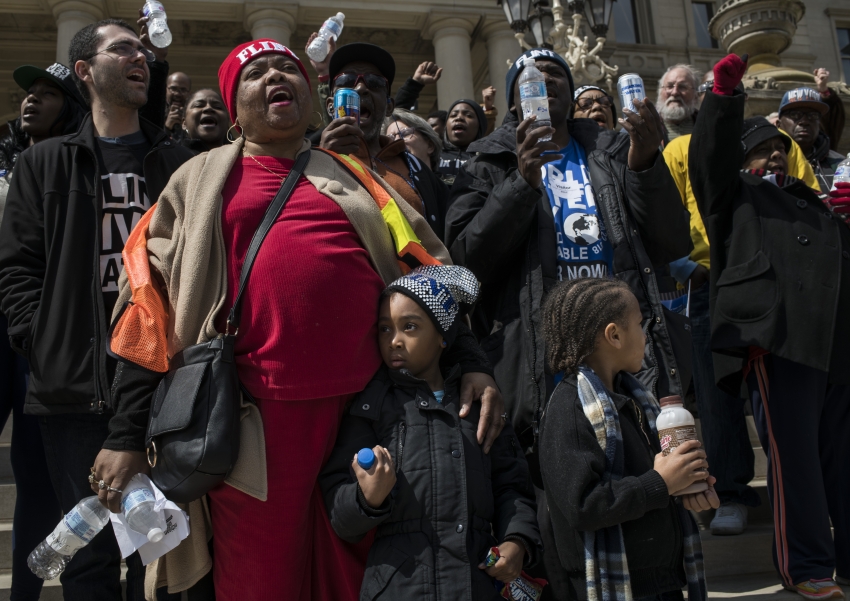 President Trump’s proposal to privatize water infrastructure will do nothing to reverse the problem of water injustice. (Photo by Brittany Greeson/Getty Images)

Lead Is a National Crisis: We Need to Fight for Clean, Publicly Owned Water Before It Is Too Late

Four years after the Flint water crisis began, our nation remains plagued by unsafe drinking water. The solution is a massive public investment in infrastructure.

There’s one path forward for clean, affordable water for all Americans: We must reinvest federal dollars into our water infrastructure.

Four years ago this week, Flint, Michigan began receiving water from the polluted Flint river, marking the beginning of its devastating water crisis. For residents like Melissa Mays, whose children suffered skin rashes and hair loss shortly thereafter—and now waits to learn the extent of the long-term health consequences of their lead exposure—trust in what comes out of the tap must seem like a distant memory. Nevertheless, water bills in Flint keep rising: May’s bill this month was $352.

We have long known that lead is a dangerous poison that affects our children’s development. That’s why in the 1970s, the United States began to phase it out of gasoline and banned lead-based paint, thanks to strong federal government action. Now, we need a similar commitment to ensure that we get lead pipes out of commission and ensure that everyone can have access to clean, affordable water.

New legislation introduced today is critical to this vision. The Water Affordability, Transparency, Equity and Reliability (WATER) Act would create a trust fund by rolling back a small portion of the Trump administration’s massive corporate tax cuts to provide $35 billion a year for our water infrastructure. It would allow our communities to renovate aging water systems, remove lead pipes, stop sewage spills in waterways and backups into basements, improve rural households’ water wells and septic systems, and provide safe water in schools.

While an estimated 12,000 lead water pipes still deliver water to Flint homes, a lack of clean, affordable water is not just Flint’s problem. Many communities have seen elevated lead levels in the water or faced other contamination issues. Water bills are also unaffordable for thousands of people in cities like Detroit and Baltimore and in rural areas across America. Martin County, Kentucky, an impoverished rural community, is experiencing rate hikes for a system that is catastrophically failing.

Last month, the EPA released a new survey that found our drinking water systems need nearly half a trillion dollars over the next 20 years to provide safe water. Add in our wastewater and stormwater systems, and America’s water systems needs more than $35 billion each year to keep our water safe and clean. This burden is falling heavily on local governments and ultimately local residents who are experiencing unmanageable increases to their water bills.

It wasn’t always like this. Federal funding to maintain our public water and sewer systems has declined 74 percent since its peak in the 1970s. On a per-capita basis, that’s an 82 percent drop. In 1977, the federal government spent $76.27 per person (in 2014 dollars) on our water services but by 2014 that support had fallen to $13.68 per person. President Trump’s proposal to privatize water infrastructure will do nothing to reverse this problem of water injustice, and people would likely see the cost of their water bills increase while Trump’s friends on Wall Street reap the profit.

A study from last year found that 12 percent of the population struggles to pay their water bills. In Minneapolis, 3,500 homes lost water service for nonpayment in 2016—affecting an estimated 8,000 people—according to City of Minneapolis data. That means no water to drink, cook or clean with, or bathe in. In many communities, unaffordable water bills can lead to homelessness with homes lost to tax sale or eviction. This crisis can break up families and destroy communities.

There’s one path forward for clean, affordable water for all Americans: We must reinvest federal dollars into our water infrastructure. This will take a commitment to protect future generations from the lead that lies below the ground in our decaying infrastructure. Upgrading our water systems would create jobs, protect our children, and ensure water justice.

Congress needs to have the vision to step in and save our tap water for future generations. It must pass the WATER Act to make sure that clean, publicly owned and affordable water doesn’t become a distant memory for us all.