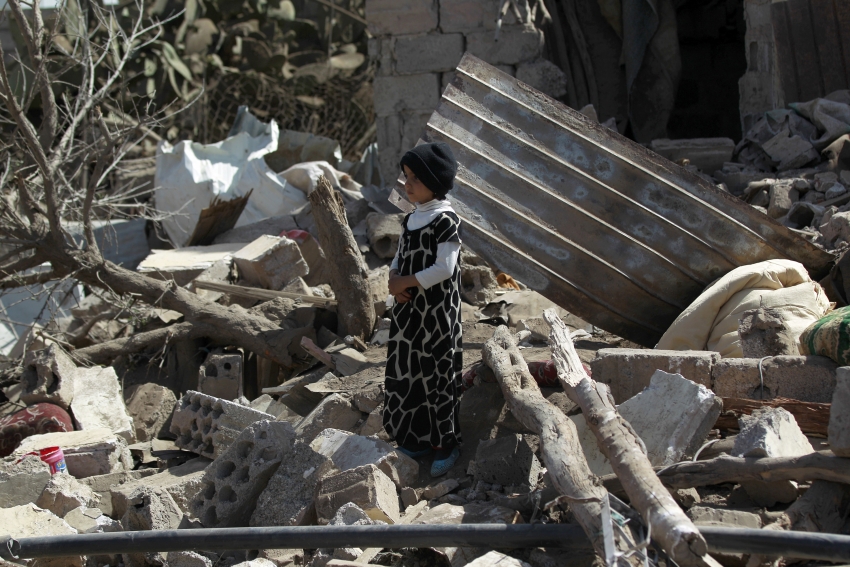 A Yemeni boy stands in the rubble of buildings destroyed in an air-strike by the Saudi-led coalition on February 25, 2016 in the capital Sanaa. (MOHAMMED HUWAIS/AFP/Getty Images)

The U.S. tries to distance itself from Saudi war crimes in Yemen—but it’s always been America’s war too.

Without first seeking congressional approval, the United States launched into action alongside the Saudis, offering logistical support and training to the Saudi military.

The U.S. government has long sought to distance itself from the morally inexcusable war on Yemen—but this public relations effort is even more difficult after The New York Times reported on May 3 that, in December of last year, U.S. Special Forces (commonly known as the Green Berets) deployed to Saudi Arabia’s border with Yemen. Though Saudi Arabia and the UAE are occupying parts of Yemen, the countries rely on Yemeni, Latin American, Sudanese, Blackwater and even al-Qaeda mercenaries to fight on the ground. Mercenaries also include former U.S. Military officer Stephen Toumajan, who commands the UAE’s military helicopter branch. The Saudi-Yemeni border, on the other hand, represents the only front where Yemeni and Saudi soldiers are engaged in direct on-the-ground combat. By placing American special forces at the Saudi-Yemeni border, the United States is engaged in direct combat with Yemen’s Houthis.

Not only does this reality contradict the Pentagon’s previous statements about its involvement in Yemen, it also brings into question the U.S. government’s intended goals. Is the U.S. military so committed to achieving Saudi Arabia’s mission to regain control of Yemen that it is willing to risk American lives? Alternatively, if the U.S. is advising and training soldiers, repairing and refueling aircraft, patrolling Yemeni waters alongside Saudi Arabia and now fighting Yemenis on the ground, is it really just Saudi Arabia’s war on Yemen?

Following the latest revelations of the increased U.S. role in Yemen, Sen. Bernie Sanders announced he would seek “further clarification on these activities,” while Rep. Mark Pocan urged Congress to “stop this secret, unconstitutional war.” Yet members of Congress ought to consider that this has always been America’s war—from the very beginning.

Under the pretense of restoring Yemen’s United Nations-recognized president Abd-Rabbu Mansour Hadi to power and curtailing Iran’s supposed influence in Yemen, the Saudi-led coalition—including the United States—launched a brutal military campaign on March 26, 2015. Arms dealers across the world rushed to capitalize on a golden opportunity: customers with deep pockets.

Despite purchasing the latest “smart” bombs that, in theory, should minimize civilian casualties, the Saudi-led coalition continues to kill staggering numbers of civilians in Yemen. These include indiscriminate attacks on civilians and civilian infrastructure that have led to the collapse of the health, economic and educational sectors in Yemen. Recently, airstrikes targeted a wedding party that left the bride and 32 others dead, while the injured endured an hour-long journey to the nearest Doctors Without Borders-supported hospital using donkeys. Saudi Arabia and its allies are also using starvation as a weapon by imposing a land air and sea blockade that keeps food and medicines out, while trapping people in. Despite committing apparent war crimes in Yemen, they continue to be assisted militarily by members of the international community.

Countries such as Canada, the United Kingdom and the United States continue to sell billions of dollars' worth of arms to the Saudi-led coalition despite warnings from human rights groups about their use against Yemeni civilians. But immoral as they are, selling weapons to warring parties does not in itself constitute the seller’s military entanglement in the buyer’s war. In this regard, however, the United States distinguishes itself from most countries not officially in the Saudi-led coalition. As we enter the fourth year of the war on Yemen, it is becoming increasingly apparent that the United States is, in fact, at war with Yemen.

Without first seeking congressional approval, the United States launched into action alongside the Saudis, offering logistical support and training to the Saudi military. Specifically, the U.S. Army trains Saudi soldiers, advises military personnel, and helps maintain, repair and update vehicles and aircraft sold to the Saudis. The U.S. Army also refuels Saudi aircraft mid-air in Yemeni airspace. This support is not without compensation: The U.S. Army boasts123 contracts in Saudi Arabia totaling more than $120 million per month.

This level of involvement in Saudi Arabia’s war on Yemen prompted members of Congress to invoke the War Powers Resolution twice since October 2017—once in the House and once more in the Senate—to challenge the unauthorized U.S. role in Yemen. The House measure (H.Con.Res.81) was stripped of its privileged status and was therefore not granted a vote in Congress. The Senate bill (S.J.Res.54), introduced by Bernie Sanders (I-Vt.), fared better in that it was not stripped of its status. However, rather than voting to extricate the United States from hostilities in Yemen, Senators instead voted to table the bill. The extent of U.S. support to the Saudi-led Coalition, however, continues to be uncovered.

As the U.S. Congress fails to take responsibility for withdrawing U.S. support from the Saudi-led war, the world’s worst humanitarian crisis continues to unfold in Yemen, the poorest country in the Middle East. With more than 80 percent of the population in need of humanitarian aid, most Yemenis are unable to find food, water, medicine, fuel and other basic necessities of life. While some reports indicate at least 10,000 civilians have been killed in the war, a less-reported figure is the death of 113,000 children—63,000 in 2016 and another 50,000 in 2017—whose lives were cut short due to malnutrition and preventable diseases such as cholera. The crisis in Yemen is the direct result of a three-year bombing campaign and blockade imposed on Yemen by U.S. allies Saudi Arabia and the United Arab Emirates. As Yemen’s wealthiest neighbors continue to destroy it, the United States has responded by secretly increasing its military role.

U.S. lawmakers—and the American people—must not ignore this role any longer.