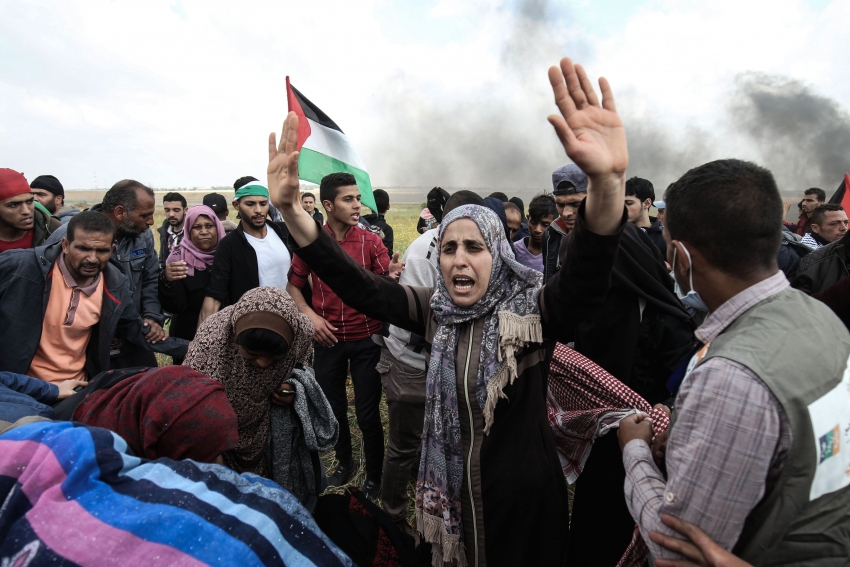 Palestinian protestors pictured during a demonstration commemorating Land Day near the border with Israel, east of Khan Yunis, in the southern Gaza Strip on March 30, 2018. (SAID KHATIB/AFP/Getty Images)

As Israel Kills Dozens, Gazans Continue to Protest. A Palestinian Woman Explains Why.

"It is something beautiful when you see women and men and girls there. Woman are always on the frontline."

For almost seven weeks, thousands of Palestinians in Gaza have gone to the “Great Return March” protest encampment to raise their voices and call attention to the plight of the 1.8 million people living in the coastal enclave. Israeli soldiers have responded to the protests with deadly force, killing at least 90 Palestinians and wounding more than 10,000 since March 30, according to Gaza's Ministry of Health.

Braving Israeli sniper fire and tear gas, these Palestinians have forced Gaza into the international headlines. Protesters are demanding the right to return to lands Israel expelled them from in 1948—and calling for an end to Israel’s land, air and sea blockade of Gaza, which has ruined Gaza’s economy.

Meanwhile, as Palestinians in Gaza continued to protest on May 14, American officials were celebrating President Trump's decision to move the US embassy to occupied Jerusalem—a move Palestinians say will embolden Israeli policies aimed at pushing Palestinians out of the city.

One of the protesters participating in the “Great Return March” is Intimaa Alsdudi, a Palestinian activist and researcher in Gaza who focuses on gender issues and Israel’s 1948 ethnic cleansing of Palestine.

In These Times talked with Alsdudi over the phone to hear a first-hand perspective on what it’s like at the protest encampment near the militarized barrier separating the strip from Israel, why Palestinians continue to demonstrate in the face of a deadly crackdown, and why Jerusalem is important to Palestinians in Gaza. This interview has been edited for clarity.

Alex Kane: Do you think the “Great Return March” has been a success?

Intimaa Alsdudi: To some extent, yeah. Everyone can participate, and it is peaceful.

We have been waiting for 70 years [since Israeli forces expelled more than 200,000 Palestinians into Gaza], waiting for the international community to do something, for UN Resolution 194 [guaranteeing Palestinians’ right to return to lands they were expelled from] to be implemented. And nobody's doing anything. So, this is a revolution of refugees in Gaza—two thirds of us in Gaza are refugees. It is peaceful and popular.

We have had a siege imposed on us for more than a decade. There is hardly any electricity and water. And at the same time, you can see your land from Gaza and you're not allowed to go to your land. And it is ridiculous. You must do something. So, it is a rebellion against Israeli practices against us and its violations of international law and not respecting the UN resolutions.

Alex: As someone who has gone to the Great Return March a lot, could you describe what it is like there, who is participating and some of the cultural activities going on?

Intimaa: It is so interesting. This is my first time seeing the whole community in the “buffer zone,” [the area near the militarized fence separating Gaza from Israel], doing random things. Women are making food and making traditional dishes. Kids play football and do traditional “dabke” dancing. Teenagers go to play cards, fly kites and sleep there. It’s a gathering of the people. You have tents and camping, and the most beautiful thing is that you can see your land. You can see what is behind the wall.

I remember during the Second Intifada, lots of women participated and threw stones at them. After, women's participation decreased. But now, there are women everywhere in the “buffer zone.”

Alex: And why do you think the role of Palestinian women in these marches is important?

Intimaa: As a woman, I'm taking care of my sisters and my brothers, because I'm the oldest child in the family, and my Dad died during the last war [in 2014] because he wasn't allowed to travel for treatment. I teach my siblings their history and their rights, and lessons about the difference between occupation, settler-colonialism, apartheid and all the Israeli practices against us, and that they have the right to revolt and rebel against that. So, this is the main role of women: They teach kids, the new generation, that you don’t have to forget your rights and your country.

It is something beautiful when you see women and men and girls there. Woman are always on the frontlines. They're not following the men, but are preceding them, because they're asking for their rights.

Alex: Are you worried about your siblings being at the protest and getting hurt?

Intimaa: Yeah, definitely. All of us are worried about ourselves and our kids because Israeli snipers don't differentiate between kids and old people and young people. I told them, “You have to stay a bit far away. Don't approach the fence, and you can raise the Palestinian flag, dance, do whatever you want.” And sometimes we take books with us and start reading sessions.

Alex: Are Palestinians in Gaza watching what's going on with Jerusalem, with the U.S. embassy being moved there?

Intimaa: People in Gaza are angry about Trump’s decision to relocate the embassy. Lots of them are talking about it, and we will not allow it to happen. It is against international law, and I think on May 14 and 15, lots of people will be at the “buffer zone” protesting the relocation of the American embassy.

Alex: Why is Jerusalem so important to people in Gaza?

Intimaa: Jerusalem is a dream. My dream is to visit Jerusalem. It is our capital, and it is not only for Palestinians. It is for all Arab countries. It is part of our religious identity and political identity. It is the center of our cause.

Alex: And have you ever been to Jerusalem?

Intimaa: Never. It is my dream. And now with moving the embassy there, it is the end of the dream. How can they negotiate Jerusalem? It is not allowed. This is a red line they cannot pass.

Intimaa: I spent two years in the United States, and I know that the American community is—and I’m sorry for this word—ignorant. They don't know what is happening.

With social media, everything is clear, and they can Google to see what is happening in Palestine. And I'm sure they can find the truth. The American people should not stay silent.

Americans can do workshops about Gaza, go to demonstrations and support the indigenous community in Gaza. Now we have Israeli apartheid, and we need exactly what happened in South Africa to happen here, with the support of the international community, especially the American community. The people must rebel against their government, and to say no. The taxes they pay go directly to Israel to buy weapons to kill innocent kids.

Alex: My last question is: Do you think that the protest will continue after May 15?

Intimaa: I think so, because until now we didn't see any concrete changes. Israel is still killing, shooting randomly at people, and the siege is getting horrible, and the injured people who were hurt in the demonstrations are not allowed to cross Erez checkpoint to go for treatment in the West Bank.