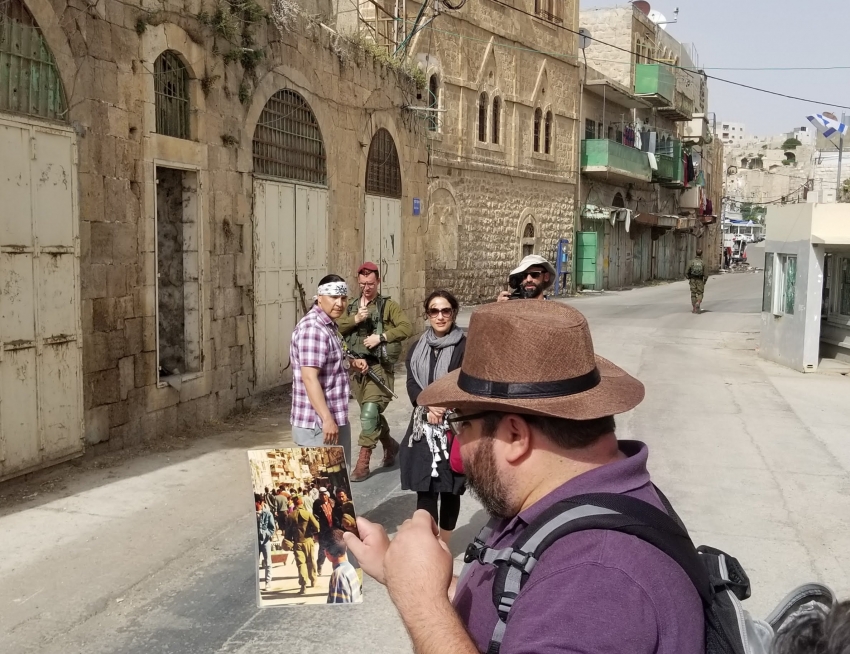 Yehuda Shaul from Breaking the Silence holds up a photo of what a street in Hebron looked like before "sterilization." (Rahul Saksena)

Israel mass-expelled Palestinians from their lands 70 years ago. The displacement hasn’t stopped since.

The Israeli military forbids Palestinians from walking or driving on their own streets, even welding shut the front doors of Palestinian homes.

Two weeks ago in Old Hebron, a once-bustling Palestinian city in the West Bank, I saw a ghost town. The streets were empty except for dozens of Israeli soldiers, on patrol with automatic weapons and flak vests, and a handful of young Israelis from illegal settlements. The occasional Israeli military vehicle rolled by slowly, towering over us.

I was in Palestine with a group of mostly black and brown activists and lawyers from across the United States. We were on a one-week “Justice Delegation,” organized by the Center for Constitutional Rights and Eye Witness Palestine, to see with our own eyes the dire human rights situation 70 years after the founding of Israel, what Palestinians refer to as the Nakba, or “catastrophe,” when up to one million Palestinians were expelled from their homes. Since March 30, thousands of Palestinians have demonstrated in Gaza to demand their right of return, with Israel killing at least 108 and wounding more than 10,000 since the mobilizations began.

As Gazans risked their lives to protest, what we saw across Israel and the West Bank was an ongoing Nakba.

In Hebron, the group of young settlers, no more than eight years old, were not happy we were there. They followed us, screaming “Arab dogs” and other racist slurs while throwing bottles at us. The hatred in their young eyes is something I’ll never forget.

At Ben Gurion Airport in Tel Aviv on Sunday, before boarding my flight back to the United States, Israeli airport officials confiscated my journal. I was both angry and sad when they told me they were keeping it. “On what grounds?” I asked, but they refused to answer. I pleaded, telling them it included my personal, private thoughts. In addition to 28 pages of notes from the trip, the journal contained entries about my relationship with my boyfriend, written long before traveling to Palestine. “The book stays with us. Have a nice flight,” said one of the half-dozen airport security officers who were poring over my journal.

Why would Israel want my journal?

Was it my notes about our meeting with Bassem Tamimi, a Palestinian activist who organizes weekly protests against illegal Israeli settlements and colonization in his West Bank village of Nabi Saleh? Tamimi told us about his wife, Nariman, and his young daughter, Ahed, both of whom are in Israeli military prison. His daughter was arrested and sentenced in Israeli military court for slapping a heavily armed Israeli solider outside her home after soldiers shot her fifteen-year-old cousin in the head at close range. Tamimi’s wife was arrested for filming the incident and charged with “incitement.” In my journal I wrote down Tamimi’s words to us: “Strong and free women make a strong and free generation.”

Maybe Israel confiscated my journal because of what legendary human rights lawyer Raji Sourani told us, via skype, about the situation in Gaza. In recent weeks, Israel has responded to mass Palestinian protests along the Gaza border with grotesque violence, killing dozens of Palestinians protesting peacefully for basic rights, including the right to return to their homes, and wounding thousands more. Sourani said, “We want the opportunity to end the siege [on Gaza] and to end the occupation and to be human beings in dignity. They are doing ethnic cleansing of Palestinians.”

Or maybe it was my notes from Umm al-Hiran, a Bedouin village in the Naqab desert. Since Israel’s founding in 1948, this Bedouin community has struggled to preserve its traditional, semi-nomadic way of life, despite Israel’s efforts to take their land. But their struggle seems to be coming to an end. Israel will soon force them off their land, demolish their homes and their way of life, and replace it with a Jewish-only colony.

In my journal, I wrote down what one of the Bedouin activists told us: “Visiting and solidarity is not enough. … What’s more important is to speak of our plight back home in Congress, [in the] media, and take it to the streets.”

As an attorney at Palestine Legal, I am not surprised that Israel doesn’t want these stories to be told. I am well-versed in the suppression of speech supportive of Palestinian rights. Israel and its proxies spend tens – if not hundreds – of millions of dollars to censor speech critical of Israeli government policies and to punish those who speak out for Palestinian freedom. Israeli officials know they are on the losing end of any debate about their violations of Palestinian rights and international law. Their strategy is to stop the debate from happening.

When it comes to suppressing speech critical of Israeli policies, Israeli authorities have powerful allies in the United States. Last year, my colleagues and I at Palestine Legal responded to 308 incidents of suppression of US-based advocacy for Palestinian rights, likely just the tip of the iceberg. From 2014 to the end of 2017, we responded to 958 such incidents.

For example, when students at Fordham University wanted to start a Students for Justice in Palestine club, Fordham banned the club, an unprecedented move. When Israel advocacy groups pressured University of California at Berkeley, the birthplace of the free speech movement, to cancel a course about Palestine, the university relented.

In recent years Israel’s supporters have pressured 24 states to enact laws aimed at punishing companies, organizations and individuals who support political boycotts for Palestinian rights, despite the fact that the U.S. Supreme Court has long held such boycotts are protected by the First Amendment. Legislation in Congress that would criminalize boycotts for Palestinian rights tied to actions by the European Union or United Nations enjoys broad bipartisan support, including from leading Democrats like Chuck Schumer (N.Y.).

These efforts are aimed at shielding Israel from accountability for its inexcusable treatment of Palestinians. In doing so, Israel's supporters trample on our First Amendment rights. None of this compares to Israel’s violent responses to Palestinians who advocate for their basic rights.

Last week, as the Justice Delegation prepared to return to the United States, I was assured by several lawyers and activists that Israel, which markets itself as the only democracy in the Middle East, would not confiscate my private journal. But over the course of our week there, we had met with numerous Israelis and Palestinians who raised alarms over the rapid rise of far-right authoritarianism in Israel. Four members of our delegation, including prominent human rights attorneys, had been denied entry into Israel. As Ayman Odeh, a member of the Knesset who is a Palestinian citizen of Israel, told us: “Only a state with something to hide would prevent people from coming to see.”

On our way to Ben Gurion Airport on May 6, I had a pit in my stomach. I had a feeling that airport officials would go through my belongings, read my journal, and confiscate it. As our bus approached the airport, I took photos of all twenty-eight pages of notes I had taken over the course of our week there. I may never see my journal again, but at least I can tell the stories that Israel doesn’t want us to hear.

Rahul is a staff attorney with Palestine Legal. His work focuses on legislative issues, advocacy for activists whose rights are under attack, and building Palestine Legal's network of legal and other advocates.