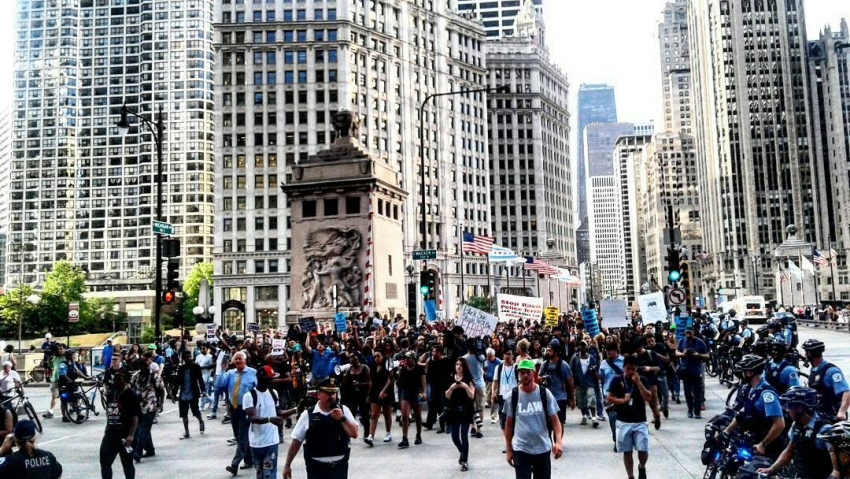 Crowds gather on July 11, 2016 in Chicago to protest the police killings of Alton Sterling and Philando Castile. (Photo: Matthew McLoughlin

Putting this new surveillance power in the hands of police would threaten the most basic right to assemble.

Increased surveillance of demonstrations and other public gatherings makes us all less safe because it intimidates and deters people from exercising their First Amendment right to protest, a necessary tool for holding elected officials accountable—especially in the age of Trump.

On May 2, the Illinois Senate approved SB 2562, which would allow police to use drones equipped with facial recognition capabilities to spy on large public gatherings across the state. Currently, Illinois law only allows police to use drones if they have obtained a warrant, suspect a high risk of loss of life, are searching for a missing person or are taking crime scene photos. The bill is currently pending in the Illinois House and is expected to pass with very little public debate. If this bill passes, it will set a dangerous precedent for other communities across the country and serve as a serious deterrent for anyone considering taking to the streets in protest.

The National Lawyers Guild of Chicago is troubled by the dramatic expansion of surveillance powers this bill would make available to Illinois law enforcement. The Chicago Police Department’s long history of violating the rights of protesters is well known and includes unlawful surveillance and targeted abuse of people working to make this a more just city for our most marginalized residents. Chicago police violence, as exemplified by the police riot at the 1968 Democratic National Convention and the murder of Black Panther Party leader Fred Hampton in 1969, continues today. We need only look at the 2012 arrest of three young people charged with terrorism due to their opposition to the NATO summit and the recent attempts by the Chicago police to stop protected First Amendment activity by the #BlackLivesMatter to be convinced that the Chicago police are not to be trusted with a legal tool that will allow them to invade personal privacy and impede political activity from the skies.

The Chicago Police have also abused surveillance technology in recent history. Most recently, the department came under scrutiny for their use of Stingrays. Multiple lawsuits have challenged the lack of oversight and the use of Stingray technology to collect data from the phones of thousands of unsuspecting individuals attending protests. After it was discovered that Chicago Police were using Stingrays with minimal legal protections, the legislature passed a strong warrant requirement bill in 2016. Now, some members of the legislature are pushing to give police more access to surveillance technology despite the fact that state law already allows law enforcement use of drones in a genuine security crisis.

While some argue that such technology can be used to hold police accountable, the proliferation of body cameras has shown the fallacy of this position. Police body cameras now allow us to watch the ongoing abuse of power in viral social media videos, yet have little impact on the consequences for police officers involved. This was displayed quite clearly in the body camera footage of the Chicago Police murder of Paul O’Neal in July 2016. The fact that the officers were wearing body cams didn’t stop them from shooting 18-year-old O’Neal in the back or from high-fiving each other as he bled to death in a South Side backyard. More often than not, surveillance technology is used to criminalize the victims of police violence, not to hold the perpetrators of state violence accountable. Like body cams, new cameras on drones will be trained on civilians and not on the police themselves.

Increased surveillance of demonstrations and other public gatherings makes us all less safe because it intimidates and deters people from exercising their First Amendment right to protest, a necessary tool for holding elected officials accountable—especially in the age of Trump. Since 2016, more than 63 anti-protest bills have been introduced across 31 states. As Trump wages war on immigrants, the environment and marginalized communities at home and abroad, the right to protest is now more important than ever. SB 2562 threatens to expand the widespread use of surveillance technology by police and set a dangerous model for law enforcement in other states. If we want to build a more equitable world, the Illinois legislature must encourage political engagement, not scare people across the country from its most elemental form: public gathering.

Matthew McLoughlin is an activist and legal worker. He works with the National Lawyers Guild's Chicago chapter as its Mass Defense Coordinator and is a co-founder of the Chicago Community Bond Fund and currently serves as the organization's Director of Programs. Cutting his teeth as an organizer with Occupy Chicago, Matt went on to organize around school closures, immigrant rights and racial justice. For years, he has helped lift up, document and support local and national social movements, including organizing jail support and solidarity actions.