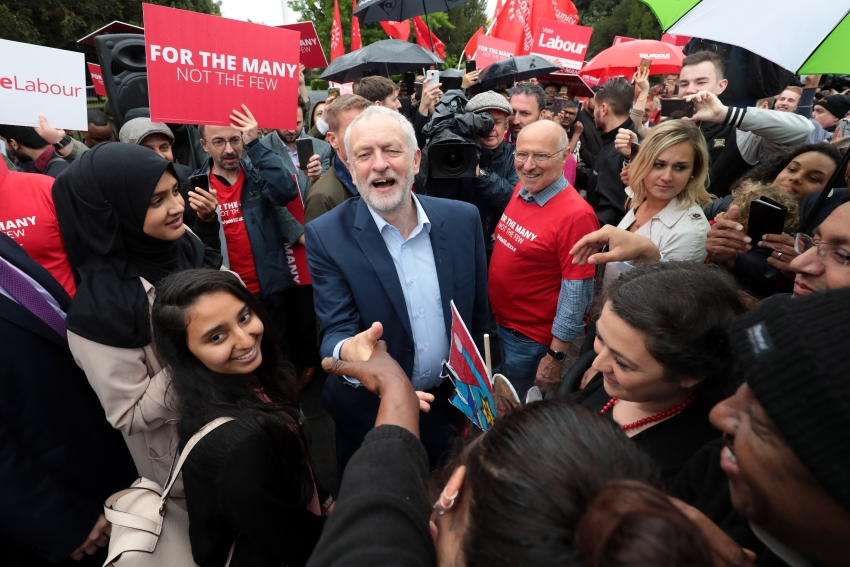 Labour Party leader Jeremy Corbyn greets supporters during a rally on May 18, 2017 in Southall, England. (Photo by Jack Taylor/Getty Images)

Hey Democrats: Take a Hint from Labour and Ocasio-Cortez and Try Moving Left

On July 18, House Democrats unveiled their new campaign slogan ahead of the 2018 midterm elections: For The People. At first glance, the message may appear similar to “For The Many, Not The Few,” the title of the manifesto put forward in 2017 by the UK’s Labour Party, led by Jeremy Corbyn. And while both slogans place the public as the center of political action, the Democratic Party still has much further to go in comparison to Labour, which embraced a bold, redistributive agenda as a means to grow its power.

The Labour manifesto called for such policies as nationalizing rail and electric utilities, getting rid of tuition for public colleges, banning fracking, investing in clean energy, controlling rent increases and massively taxing the rich and corporations. The Democratic Party establishment, meanwhile, has so far steered clear of adopting such unabashedly left proposals.

Yet the recent primary victories of democratic socialist candidates such as Summer Lee and Sara Innamorato in Pittsburgh and Alexandria Ocasio-Cortez in New York against powerful incumbents within the Democratic machine signal that the energy and enthusiasm within the party lies on its left flank. These candidates, along with many other democratic socialists across the country, have run on platforms that are largely in line with Labour’s manifesto.

In response to the victories by candidates such as Ocasio-Cortez, many U.S. pundits and political insiders have either written off the rise of democratic socialism as marginal or warned against the Democratic Party embracing “extremism.”

Such a reaction is familiar. Soon after UK Prime Minister Theresa May called for a surprise general election to take place in June 2017, pundits across the political spectrum repeated a narrative reducing Corbyn to a scruffy, unelectable old-school socialist who would return Labour to the electoral obscurity of the 1980s rather than a viable alternative to the Conservative status quo.

The accidental leaking of the Labour Party’s manifesto during the 2017 general election seemed to give Corbyn’s critics another chance to accuse him of disorganization and incompetence. However, the leak ended up working in Labour’s favor, as the electorate was able to understand Corbyn’s vision of a progressive Labour-led Britain at face value and without spin. The manifesto proved popular: Labour’s poll ratings instantly rose, with 7 in 10 voters welcoming its pledges.

The appeal of Labour’s manifesto lay in its bold vision that decisively addressed the public’s material circumstances and needs. It was as much an implicit accounting of the violence of austerity as it was an explicit policy platform for readdressing it. Corbyn ended up receiving 40 percent of the popular vote, a swing of 10 percent from the previous election which equaled the largest increase in the vote-share by a Labour leader since 1945. Corbyn won the hearts and minds of much of the British public despite facing immense hostility from even his own MPs, laying bare the dissonance between the politics of the political establishment and that of the general population.

Indeed, as Corbyn stated in his keynote speech at the 2017 Labour party conference, “the political center of gravity isn’t fixed or unmovable, nor is it where the establishment pundits like to think it is,” before adding: “we are now the political mainstream.” Today, support for policies such as renationalization, tax increases on both corporations and higher earners, and the strengthening of workers’ rights rank high among the public regardless of divides among generations or political parties. Corbyn’s policies are popular even among those who are older and identify as conservatives, proving that progressive values can transcend the tribal nature of party politics.

As has been proven among Labour in the UK, signs show that the Democratic base in the United States is moving much further left than the party establishment anticipated, and the base has shown a yearning for candidates who actually speak to their material interests.

This desire for a different kind of politics is also measurable in the strength of organizing across the United States. The membership of the Democratic Socialists of America (DSA) has increased exponentially in recent years, growing from 6,500 dues-paying members in 2014 to over 47,000 today. In the UK, Momentum—a democratic socialist grassroots movement established to support Corbyn after his election to Labour leadership—now boasts over 40,000 active members. Today, Labour remains steadily ahead of the Conservatives in opinion polls and is poised to make significant gains in the next general election.

While the Democratic establishment remains far more ossified and entrenched than Labour, especially when it comes to the power of corporate interests, the success of Corbyn in the UK and candidates such as Ocasio-Cortez illustrates that policies associated with democratic socialism will not alienate the majority of the Democratic base.

Ahead of the midterms, the Democrats need to go much further than simply revealing a new slogan. Labour’s success is rooted in the party’s manifesto, which clearly and coherently outlines how societal transformation is possible. If the Democrats wants to win, they need to institutionalize the campaign policies and ideas that have already elected grassroots democratic socialist candidates over moneyed incumbents within the party machine.

The political dynamics in the UK are different from those in the United States. However, electorates in both countries find themselves facing many of the same conditions as a result of years of crushing austerity. As a result, the policy platforms of both Corbyn’s Labour Party and U.S. democratic socialists have been able to to achieve wide appeal.

The rise of the party’s left wing has been key to Labour’s success and growth. The same can be true for Democrats, if they choose to learn the lesson—and seize the moment.

Tobi Thomas is an editorial intern at In These Times.