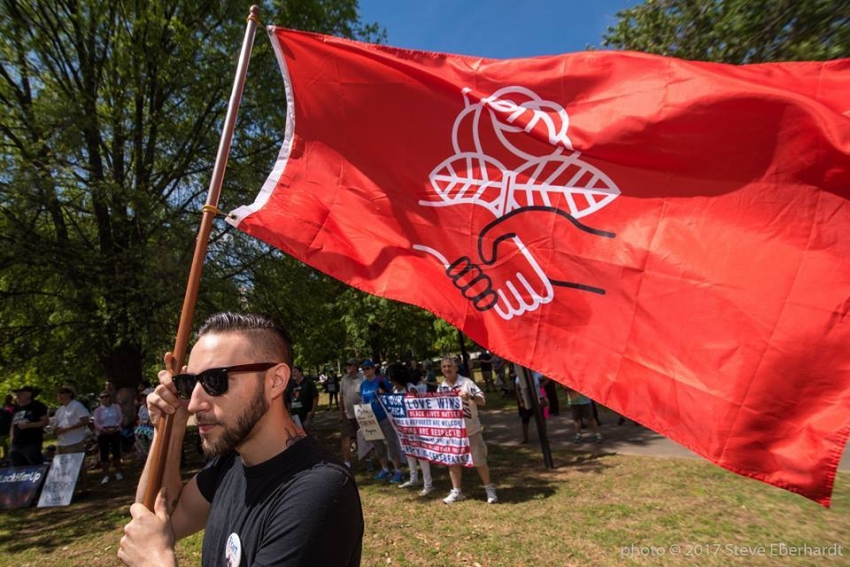 What You Need To Know About Democratic Socialism

Democratic socialism is having a moment. From electing open socialists to ending capitalism, here’s what the movement is all about.

Simply put, socialists believe that the economy should be run for people, not for profit.

In the month since Alexandria Ocasio-Cortez’s shocking primary victory in New York’s 14th Congressional District, the term “democratic socialism” is everywhere. While Stephen Colbert declares that God’s a socialist on late-night television, Bret Stephens warns from the New York Times that democratic socialism is “Dem doom.” In the same publication, Michelle Goldberg insists that the “Millennial socialists are coming,” and that centrism won’t win, while on The View, Meghan McCain screams that she doesn’t want socialism to become “normalized,” shouting Margaret Thatcher quotes at Joy Behar.

Media spectacle aside, there are many questions floating around. What’s going on with these socialists in the Democratic Party? How is socialism different from capitalism? And just what do democratic socialists actually believe?

With so many questions and so much attention, it’s worth taking a beat to revisit the basic principles of the growing democratic socialist movement in the United States. Simply put, socialists believe that the economy should be run for people, not for profit. We believe that all working people—no matter their gender, race, nationality or religion—deserve to reap the fruits of their labor.

Our insistence on this basic premise comes from our understanding that all of the wealth in this country, and in the world, is produced by workers. But right now in the United States, the vast majority of this wealth goes to a very small segment of the population, not to the millions of people that produce it. While capitalists profit off what workers make, workers themselves get just barely enough to survive.

Many progressives say that this system is broken, that we need small fixes here and there to make it work better for everyone. Socialists understand that this system isn’t broken at all, that it works just as it is intended: to enrich an elite few at the very top—giving them ever-more control over the economy and politics—off the backs of the many. And, because we are democratic socialists, we believe that we must replace capitalism with a system that puts both the economy and political decision-making under democratic control.

Healthcare policy is driven by private profit: approximately 30 percent of all insurance premiums goes not toward providing healthcare, but to CEO salaries, advertising and lobbying.

Many major cities in this country are suffering housing crises, not because there’s a shortage of places to live, but because under-taxed giant corporations move in, drive up the price of land, and open the door to for-profit developers to charge up to five times the rent.

Our planet’s health and climate are under constant assault because powerful corporations use the political system to evade regulations and maintain their profits.

U.S. foreign policy is based almost entirely in protecting capitalist interests, which has resulted in the United States engaging in violent conflict and wars throughout Latin America, the Middle East and much of the rest of the world.

Democratic socialists want to do away with the system that makes all of this possible. We want a political and economic system in which people are free—not dependent on their job for health insurance, not working 80 hours a week just to cover food and rent—but truly liberated to thrive and flourish.

So, how will we get there? And—the question that everyone keeps asking—how will we pay for all this?

The wealth we need to build the world we want is already here. The problem is that it’s controlled from the top down, by very few people, and not democratically by those who produce it. In order to build the power we need to take this wealth back, we have to organize working class people into a mass socialist movement. That means recognizing that we, the working class, have more in common with one another than we do with the wealthy elite, and that we must fight together for racial and gender justice and against other oppressions used to divide us.

Right now, the largest socialist organization in this country, the Democratic Socialists of America (DSA), has about 48,000 members, most of whom joined the organization after being energized and inspired by the campaigns of Bernie Sanders and Alexandria Ocasio-Cortez. In order to harness this energy and continue building the socialist movement, the DSA takes up transformational campaigns and projects decided on democratically by its members through debates and voting.

These campaigns include: Medicare for All, which would guarantee comprehensive, free-at-the-point-of-use healthcare to every single resident of this country; abolishing ICE, an agency which imprisons working-class people who seek a better life for themselves and their children while giant corporations cross borders as if they didn’t exist at all; and universal rent control, which would limit the profits wealthy developers make from charging exorbitant rents to working-class people.

The DSA is also committed to supporting and building a robust and fighting labor movement, helping workers find power through democratic organizing in their workplaces and showing them that when we organize, we win. Democratic socialists have also embraced selectively involving ourselves in electoral races, not because we believe a single politician can bring about socialism, but because by campaigning for socialist candidates, we can help advance independent politics free of corporate money and achieve reforms that benefit working-class people, all while broadcasting socialist ideas to the mass public. And, in distinction to many of self-described socialist governments throughout history, we know that the only way to win a truly liberatory society is to organize from below.

As democratic socialists, we are aware that we have a long road ahead. We also know that it is only by building a socialist movement through organizing democratically that we will win the just world we deserve.

Marianela D’Aprile is a member of the National Political Committee of the Democratic Socialists of America and lives in Chicago, Illinois.