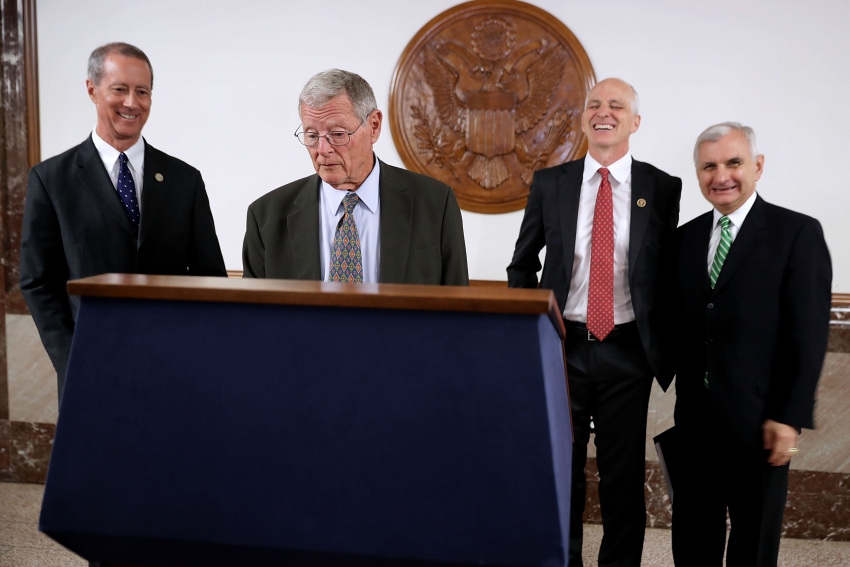 The military authorization bill must become a place for dissent and discussion.

With little debate or public attention, the Senate just followed the House in approving $717 billion for the nation’s military, meaning the bill is headed for the president’s signature. The passage is no surprise. The National Defense Authorization Act is one of the few pieces of federal budget legislation that sails through every year, without fail, on a bipartisan basis.

Yet, the bill deserves fierce debate—and dissent. At $717 billion, the package provides a historically high military budget. By my calculations based on numbers from the Office of Management and Budget, in 1997, after Cold War spending was ratcheted down from its Reagan-era peak, military spending was $386 billion after adjusting for inflation. By the height of spending during the Iraq and Afghanistan wars, it had more than doubled to $799 billion. Yet today, despite massive troop drawdowns and multiple declarations of victory from the war on terror, military spending in 2019 will remain $268 billion more than it was before the start of the Iraq and Afghanistan wars.

A win for arms manufacturers

That a $717 billion spending package could pass with so little debate or contention is a symptom of our elected leaders' deference to the Pentagon. But it’s also a sign of a seemingly unrelated old adage: It’s the economy. In too many instances, old-fashioned pork and provincial interests are the real motivations.

So, what is the military buying, and why? And just as important, what isn’t the federal government buying as it hoards cash for the military?

One answer is that the bill represents a big win for weapons contractors, providing funds for 77 new F-35 jet fighters—the Lockheed Martin show horse that has been in development for nearly 20 years and is billions of dollars over budget. Even military spending champion Sen. John McCain, for whom the bill is named, has called the jet fighter “a scandal and a tragedy” for its schedule and budget problems.

An earlier House version of a defense spending bill had increased the number of F-35 fighters to 93: 16 more than the Pentagon asked for. That bill, which is no longer under consideration, came from a subcommittee chaired by Representative Kay Granger (R-Texas), whose district is home to a key Lockheed facility where the F-35 is made.

The bill also includes funds for 13 new ships, three more than the Navy asked for. The justification for two of the three additional ships was openly economic: The bill provides funding for three new ships of the same kind as a Navy ship that caused a minor scandal when it was stranded in ice off the coast of Montreal this winter. A congressional staffer involved with the defense bill negotiations commented that authorizing just one ship would be “damaging to the two construction yards” in Wisconsin and Alabama, where the ships are built. Like the F-35, the ship is also made by Lockheed Martin, the biggest federal contractor with more than $44 billion in military contracts in 2017.

Among new initiatives, the bill provides $65 million for a new nuclear weapons program, that would repurpose existing weapons into “low-yield” weapons, compared to most of the nuclear warheads the United States has today. But, these “low-yield” weapons would be comparable in power to the weapon the United States dropped on Hiroshima, and equal to roughly 1,000 of the conventional MOABs, or “Mother of All Bombs” that Trump authorized for its first-ever combat use in Afghanistan in 2017. The new weapons are likely to be adapted from Trident missiles, made of course by none other than Lockheed Martin.

In a few instances, reason prevailed over profligate spending. The figure of 77 F-35 fighters is too high, but it’s better than the 93 the House subcommittee recommended. The Senate version of the authorization bill placed modest limits on the president’s military parade, requiring that no troops be deferred from real military needs to march through the streets of our nation’s capital. And perhaps most significant from a spending perspective, the Senate – though not the House – deferred the president’s repeated request to add a whole new branch of the armed services: the so-called Space Force.

As is usually the case, the bill passed with wide bipartisan majorities in both the House (359-54) and the Senate (87-10). If there is one thing sacred in U.S. federal budgeting, it is the military budget.

But, while the politics may pave the way for seemingly unending military spending, one interesting pattern emerged from the votes. Among the 10 “no” votes in the Senate were four of the five most-often mentioned Democratic presidential mentions: Senator Elizabeth Warren (Mass), Senator Bernie Sanders (Vt.), Senator Kamala Harris (Calif.) and Senator Kirsten Gillibrand (N.Y.). Senators Sanders and Gillibrand both voted no on the bill last year, but the others are new converts. Senator Cory Booker (D-N.J.), who is also often mentioned as a possible candidate, voted yes. Could the politics of a presidential race help focus questions about the United States’ runaway military spending and dangerous new weapons programs?

It’s a difficult question. The economics of the bill can trap usually-progressive legislators. Senator Warren voted no this year, but last year her yes vote was trumpeted by a statement championing funding for Hanscom and Westover Air Force bases, both in Massachusetts.

The tragedy is that the short-term economic gains from military funding often come at the expense of more meaningful jobs gains that could come through investing in health care, education, clean energy and more. It’s worth a look at what could be, if those 10 “no” votes multiplied and the military had to budget more carefully.

What if the war on terror were to really end, and the military budget returned to its post-Cold War, pre-9/11 days, averaging about $415 billion a year?

That would save roughly $300 billion a year—a sum that could finance Senator Sanders’ plan for free college and help address the country’s backlog of unfunded infrastructure needs—including water systems, roads, bridges, electricity and schools.

The military authorization bill must become a place for dissent and discussion. Rubber stamping ever-growing military spending is good for the Lockheed Martins of the world, but the rest of us pay a heavy price.

Lindsay Koshgarian is the program director of the National Priorities Project at the Institute for Policy Studies.