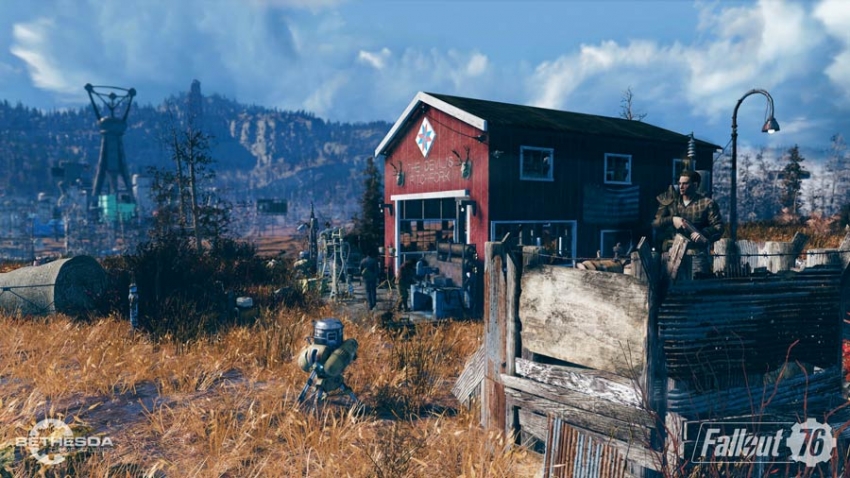 How Fallout 76 Can Help Us Rebuild West Virginia

In the post-apocalyptic video game, millions of players will imagine an Appalachia reborn from the ashes.

Through the game, people exiled from the region by economic hardship, rural isolation or environmental destruction will be able to return home.

It is easy to bring down a mountain if you use brute force. Ten percent of West Virginia’s mountains have met this fate, pulverized by coal companies into particles so small that those living or working in proximity breathe them in. What was once an ancient, living thing becomes a clog in someone’s vascular system, tiny crystals of silica and other minerals invisible until they transform into a dark spot on a chest X-ray. Mountaintop removal can be a death sentence for both people and land. “This land is deader than dead can be,” environmental activist Larry Gibson mourned, “This is what the end of the world looks like to me.”

A different end of the world is coming soon to West Virginia. In June, Bethesda Game Studios announced that Fallout 76, the latest installment of its postapocalyptic video game franchise, is set in the mountain state. In this ninth game, designed as a prequel, you play as a member of the first generation of nuclear-war survivors to explore the world outside radiation-protected vaults. The game, launching in November, will be entirely online and feature a vast, untamed world four times larger than any previous Fallout realm. The announcement made Fallout 76 one of the most anticipated games of the year. More than two million people viewed the trailer within 24 hours of its release.

Fallout games are known for their retro science-fiction aesthetic and immersive gameplay, blending elements of a firstperson shooter with open-world exploration. There are many enemies to fight in the wasteland, but also many survivors to save. Missions feature tasks of both sort, woven into an overarching storyline in which the player helps restore civilization by assisting others. “When the fighting has stopped and the fallout has settled, you must rebuild,” the trailer teases.

It’s a fitting mandate for a game set in West Virginia. The state is already ground zero for a distinct type of preapocalyptic destruction wrought by the fossil fuel, chemical and pharmaceutical industries. “Fallout 76 is a total ripoff of Appalachian life,” Trevor Anderson joked on Twitter. “If my fellow West Virginians wanted to fight junkies over basic resources in an unforgiving and dying wasteland, just save yourself the $60 and go outside.” But the most compelling thing about Fallout 76 isn’t the grim parallels to the real-life survival horror that is today’s Appalachia, but that broader mission: to save ourselves and civilization as we know it, we must rebuild West Virginia.

Connecting our fates to that of West Virginia, even in a video game, will be a striking reversal in our current political moment. It is righteous to disdain GOP-voting West Virginia for its part in the unfolding traumas of the Trump administration. Pundits spend pages brainstorming strategies to sever West Virginia and other red states from the body politic. “Our separation … is necessary,” Kevin Baker wrote in The New Republic, arguing that a “bluexit” is the “only way we can counter all of [the red states’] fantasies about what this man you have elected is.” This is without digging into the longstanding regional stereotypes that make it easier for middle-class and affluent people to imagine themselves protected from—and innocent of—the economic and resource exploitation West Virginia experiences.

West Virginia represents dilemmas we must confront and a crisis of imagination we must overcome to secure a better future. How do we seize control of our resources from despotic industries? Is it possible to divorce our politics from corporate influence? How can we transition an economy away from the most brutal manifestations of capitalism? How can we survive, together, the erosion of our dignity, safety and rights? If we can change the fate of West Virginia, we might just change America’s in the process.

To be sure, a game will not answer these questions for us. It will not save my world, or yours. But it can bend our minds to different ways of thinking. To create and interact with this different version of West Virginia is to imagine it liberated from its destructors, and that can be potent, particularly for those of us who live in the region. What if, instead of our collective fantasies of punishing Appalachia, we dreamed of its resurrection? British theorist Mark Fisher, paraphrasing Fredric Jameson, wrote, “It is easier to imagine an end to the world than the end of capitalism.” Maybe the game will inspire us to imagine both.

If these interpretations seem indulgent and theoretical, let us consider the scale of what is to come. If sales predictions for Fallout 76 come true, by this time next year there might be more than 20 million people inhabiting Bethesda’s virtual West Virginia, around 18 million more than currently live in the state, which is experiencing a depopulation crisis as young people migrate in search of stable employment. Bethesda’s previous Fallout title did $750 million in sales in its opening weekend, which could be four times more than what West Virginia will earn in coal severance taxes for all of 2018. Coal severance, which counties use to fund a range of municipal services from fire departments to healthcare facilities, represents around 5 percent of the state’s revenue stream. In other words, West Virginia will soon be faring worse economically compared not only to most other states but also to its pop culture copy brought to the brink of oblivion by nuclear war.

It’s a dark comparison, but one that is also exciting in a surreal way. A version of West Virginia will soon receive emotional and material investment from a broad public. There’s a light-hearted joy that comes from knowing, in that world, there will be battles we can win. Monsters will be easily identifiable, instead of the usual corrupt political leaders and lobbyists suited up for the state house. It will do our hearts good to see the places we love absent of the people and forces that do them harm. We cheered, did we not, when current Republican Gov. Jim Justice’s luxury, taxpayer-subsidized resort, the Greenbrier, made a brief appearance in the game’s trailer and we imagined the implied end of his oafish tenure.

Millions of people will be rebuilding some version of West Virginia, and that feels like a small miracle.

It is especially moving to imagine that, through the game, people exiled from the region by economic hardship, rural isolation or environmental destruction will be able to return home—ephemerally but on their own terms—to take back what was left and what was lost, to find their own country roads again. There’s a concentrated form of homesickness that clinicians and psychologists have noted among people from Central Appalachia, particularly its mining communities. Solastalgia, a corrupted form of nostalgia, is the psychic pain that occurs when one’s home vanishes, usually through unwelcome environmental change, be it a natural disaster or mountaintop removal. It’s a form of mental distress among individuals with a strong place connection and is characterized by a profound and unending sense of powerlessness.

It is unlikely a game could offer relief from such a condition, but it might provide a new way to process those complex feelings. What can be said with certainty is that many West Virginians are eagerly anticipating the opportunity to find out. Area attractions featured in the game, like Huntington’s Camden Park, are experiencing an uptick in visitors. West Virginia tourism websites see their traffic surging. Jess Morissette, a professor of political science and pop culture at Marshall University, recently told Polygon that watching locals absorb news and updates about the game has been the most exciting part of the announcement and made Morissette hopeful for “a different outlook on West Virginia.” Our generation has never experienced positive attention on this scale.

Bethesda’s Fallout 76 reveal wasn’t the only exciting moment for Appalachia at the most recent E3 video game conference. The Gaming Institute at Eastern Kentucky University waited to hear how it would fare in the expo’s college competition, a game design contest. The Institute made the finals for its atmospheric in-progress game, Mine 18, that explores life in a historic coal camp and a quasi-fictitious mystery surrounding the fates of its residents and a black lung epidemic. Although Mine 18 didn’t take the top honors, the experience galvanized the young developers’ enthusiasm for making games in and about Appalachia.

In the conventional wisdom of Appalachian economic boosters, technology will be our salvation. Kentucky Rep. Hal Rogers (R) calls it the promise of a Silicon Holler, a new regional economy built “not on coal alone, but on broadband, code and apps.” In most forms of this logic, the future looks like bland neoliberal substitution, an adjusted golden ratio of miners to coders tweaked to fit the marketplace and dictated by the myth that employment prospects and wages would improve greatly if more workers, particularly those in industrial trades, sought out 21st-century skills. But perhaps technology can offer something else, something more speculative. This adventure begins when we confront the catastrophe we are living in and imagine ourselves as architects of something better.

Elizabeth Catte is a writer and historian based in Virginia’s Shenandoah Valley. She is the author of What You Are Getting Wrong About Appalachia and the co-editor of 55 Strong: Inside the West Virginia Teachers’ Strike.

The Local Foods Movements Has Made Half a Revolution. For the Other Half, We Need a Green New Deal