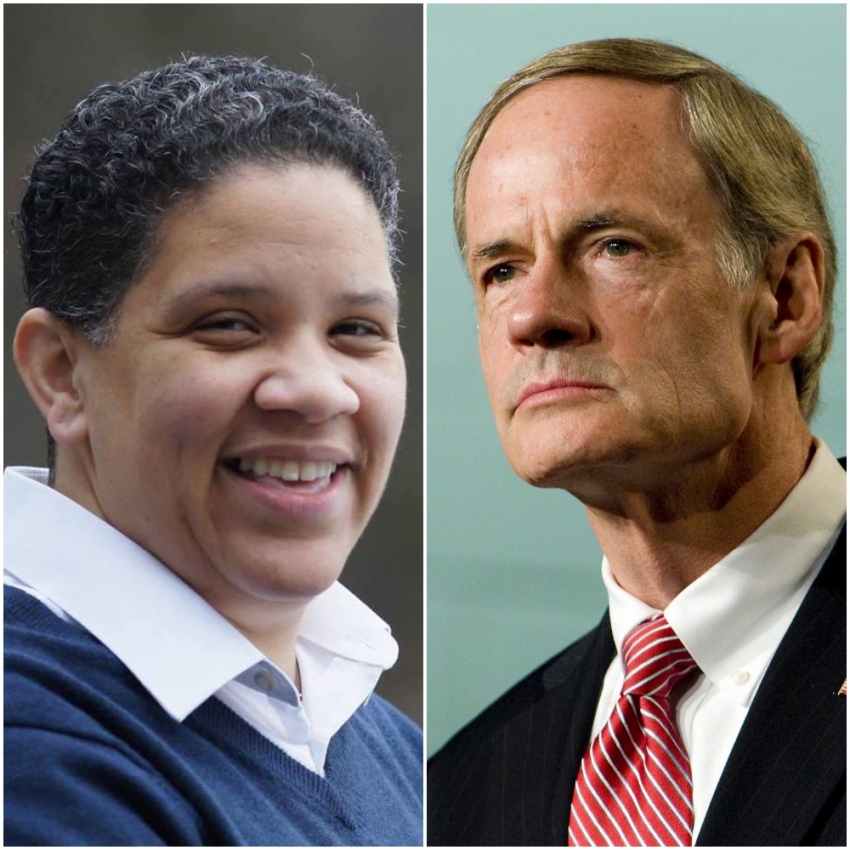 Why Is Planned Parenthood Endorsing a White Man with a Shaky Record Over a Pro-Choice Black Woman?

Kerri Evelyn Harris is gaining momentum in an insurgent campaign to oust centrist Sen. Thomas Carper (D-Delaware), who voted for the “partial birth” abortion ban. But she won’t have the help of Planned Parenthood.

Carper was one of just four Democrats who supported the confirmation of Brett Kavanaugh to the D.C. Circuit Court in 2006, paving the way for Kavanaugh’s nomination to the Supreme Court, which reproductive-rights activists believe imperils Roe v. Wade.

The Democratic primary for a Delaware Senate seat this year is showcasing the sharp divide in the party. Incumbent Tom Carper, a pro-corporate white male centrist with a track record of anti-choice votes faces a challenge from Kerri Evelyn Harris, a Black woman and antiwar Air Force veteran with working-class roots and a transformative progressive agenda.

The Democratic Party establishment has rallied around Carper. He’s received endorsements from Hillary Clinton, Joe Biden and the Delaware Democratic Party. The Delaware AFL-CIO also backs Carper, despite his support for anti-worker trade deals like CAFTA and the TPP. So does the League of Conservation Voters, although he voted for the Keystone Pipeline four times and to confirm Rick Perry, Trump’s scandal-tainted pick for energy secretary.

In August 2017, longtime Planned Parenthood president Cecile Richards criticized Democratic Congressional Campaign Committee (DCCC) Chair Ben Ray Lujan (D-N.M.)’s statement that support for abortion should not be a “litmus test” for backing Democratic candidates in 2018. Richards told Politico, “I think he’s totally wrong, and I’ll use every opportunity to convince him of that.”

Yet Carper has a record of anti-choice and anti-women votes. In 2003, he voted for the so-called Partial Birth Abortion Ban Act, which banned late-term abortions even when a woman’s health was in jeopardy. Planned Parenthood unsuccessfully sued to overturn the law. In 2006, Carper voted with Republicans for the Child Interstate Abortion Notification Act, which would have forced clinics to notify parents of teenagers if they had crossed state lines for an abortion. (Carper later voted against a more extreme version of the bill.)

Carper was also one of just four Democrats who supported the confirmation of Brett Kavanaugh to the D.C. Circuit Court in 2006, paving the way for Kavanaugh’s nomination to the Supreme Court, which reproductive-rights activists believe imperils Roe v. Wade. Carper says he regrets the vote: “If I had known 12 years ago how Judge Kavanaugh would have ruled on any number of issues, including health care and the environment, I never would have voted for him in 2006,” he wrote in a recent statement. “I have no intention of voting for him now.”

“One of things we really work with members of Congress on is education and evolution and we are excited that Sen. Carper has taken all pro-women's health voters since 2006,” Wallace said. Of the vote to confirm Kavanaugh, Wallace echoed Carper’s point that in 2006, Kavanaugh had not yet served as a judge and his anti-abortion stance was less clear: “He didn’t have the record he has now when those votes were taken.”

However, with the exception of Neil Gorsuch’s nomination to the Supreme Court (which Carper opposed), the action fund does not score confirmation votes. On these, Carper’s record has arguably been less favorable to women’s health.

In May 2017, Carper voted to confirm FDA Commissioner Scott Gottlieb, one of just five Democrats to do so. Gottlieb had publicly attacked federal funding for Planned Parenthood and had opposed coverage of birth control under the Affordable Care Act, which drew strong criticism from NARAL Pro-Choice America, the National Women’s Health Network and the Planned Parenthood Action Fund.

Carper also voted last year to confirm right-wing Michigan judge Joan Larsen to the Sixth Circuit Court of Appeals, a confirmation hailed by the anti-abortion Susan B. Anthony List as a “pro-life victory.”

In January, Carper was again one of just six Democrats to vote to confirm former Eli Lilly executive Alex Azar as Secretary of Health and Human Services. Azar has since issued the most sweeping attacks on Planned Parenthood from the federal government in a generation by promulgating rules that would prevent the organization from performing abortions at clinics that receive federal funding for family planning services.

Planned Parenthood’s endorsement of Carper, a white man, over Kerri Evelyn Harris, a progressive LGBT Black woman, also stands in apparent contradiction to “Stand With Black Women,” a framework that Planned Parenthoood is rolling out to inform the work of the nonprofit and the PAC. “We know that standing with Black women does not stop at providing healthcare,” explains Nia Martin-Robinson, PPFA's director of black leadership and engagement. “We must invest in policies, resources and actions that dismantle sexism, anti-Blackness and other barriers.”

Over 1,500 white men have served as U.S. senators, compared to only two Black women; I asked Planned Parenthood’s Wallace about the decision to endorse Carper over Harris, in light of the Stand with Black Women campaign. Wallace noted Planned Parenthood Action Fund’s 2018 work on behalf of other Black women in Congressional races, including Reps. Gwen Moore in Wisconsin, Alma Adams in North Carolina and Karen Bass in California, and challengers Lucy McBath in Georgia and Lauren Underwood in Illinois.

Regarding the Delaware race, she said, “Identity is important, but working across the aisle and advancing our agenda is important. We have to evaluate all of those aspects. That’s not to say that we wouldn’t love to have more Black women and more women of color and more young people—we would love to have a Congress that is truly representative of the American people.”

By contrast, after Planned Parenthood’s unprecedented decision to endorse Hillary Clinton in the 2016 Democratic presidential primary against another pro-choice candidate, Bernie Sanders, the organization emphasized the role of identity. Introducing Clinton in June 2016 when she became the presumptive nominee, then-president Cecile Richards said, “There are three women on the Supreme Court — hurrah! 20 WOMEN in the U.S. Senate. And when the Planned Parenthood Action Fund and all of us do our work right over the next five months, we will proudly be part of electing the first woman President of the United States!”

Planned Parenthood’s relationship to Black women is “complicated,” says University of Pennsylvania Professor Dorothy Roberts, author of Killing the Black Body: Race, Reproduction and the Meaning of Liberty. “It's complicated by the roots of Planned Parenthood in the intersecting birth control and eugenics movement back in the 1920s and 30s. This is a historical background, which I think continues to reverberate today in various ways.

Roberts also notes, “Another point in the history of the reproductive rights movement is when women of color were advocating for federal and state regulations coming out of a history of rampant abuse of sterilization, and Planned Parenthood opposed some of those regulations because of a concern that it would violate white women's rights to be sterilized.”

I asked Planned Parenthood’s Wallace if Carper’s voting record aligns with principles of reproductive justice, especially in comparison with Kerri Evelyn Harris’ platform, which advocates Medicare for All, paid maternity leave, a job guarantee program and criminal justice reform, in addition to being firmly pro-choice.

While Planned Parenthood may reject the notion that it is a reproductive justice organization, the group and its chapters use the term. Planned Parenthood of New York City recently announced a Reproductive Justice Fellowship named after Joan Malin, a white woman who was the longtime head of the branch. The inaugural recipient of the fellowship, announced in July, is also white.

Roberts argues that reproductive justice provides a more comprehensive approach than the narrower “reproductive health” service advocated by Planned Parenthood. “A reproductive justice framework rejects the idea that the solution to high rates of poverty, to lack of healthcare more broadly, to low wages—that the answer to that is for people who are disadvantaged to have fewer children,” says Roberts. “That's the false view of abortion that Planned Parenthood has taken in the past—that abortion is the solution to these social problems. The platform of [Kerri Evelyn Harris] is that we need social change so that we can have true reproductive freedom. Reproductive justice embraces not just access to abortion—that's just a piece of a much more holistic and broad way of discussing reproductive justice. The ideology that abortion solves these problems—it's anti-freedom, it's anti-human rights because it substitutes population control for true reproductive freedom and human rights.”

Harris is fighting an uphill battle, to be sure. As of the last campaign finance report June 30, Carper had 30 times the campaign war chest of Harris, who is refusing corporate donations. But Harris has gained momentum in recent weeks, buoyed by the support of Alexandria Ocasio-Cortez, Justice Democrats and the Working Families Party, which is investing in doorknocking and attack ads against Carper in the final days of the campaign. And, as Paula Giddings documents in her famous history of Black women's work for social justice, When and Where I Enter, if there’s anything that defines Black women’s experiences in America, it’s uphill battles.

Update: This text has been expanded to clarify the role of Stand With Black Women

Mekdes Maryam Amare is a feminist, community activist and mom working to end oppression. She is based in the Mid-Atlantic.