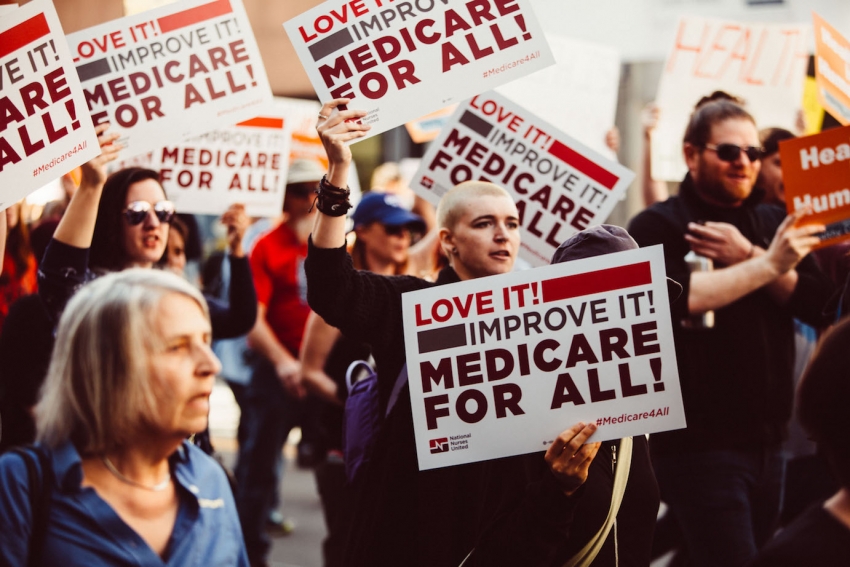 A Medicare for All Rally in Los Angeles, February 2017. (Molly Adams/Flickr)

The Inside-Outside Approach to Bernie 2020

Endorse, but play the long game.

For other perspectives on this debate, read Briahna Gray and Sean McElwee.

Bernie Sanders played an irreplaceable role in 2016. One of the few leftists in high national office, he was better placed than anyone else to catalyze a reaction that has now produced, among other things, a Democratic Socialists of America (DSA) pushing 50,000 members and the stunning upset victory of Alexandria Ocasio-Cortez.

Among the progressive base, the mood has shifted from acquiescence to Clintonite centrism to a taste for fiery demands. There’s no better indication of this than the rush of ambitious politicians, from Kirsten Gillibrand to Kamala Harris to even Cory Booker, to endorse previously unthinkable Sanders priorities like Medicare for All. So it was probably inevitable that, at some point, the cries of “Bernie would have won!” would give way to “Bernie 2020!”

Immediately after the 2016 elections, I very much hoped that this was not where we would end up. There are multiple reasons to prefer someone other than Bernie as the Left’s next presidential avatar.

First, demographics. It’s not that an old white guy can’t lead a young and diverse coalition. But the Left should be aiming to elect people who come from the ranks of the rising young movement and share their experiences.

Moreover, Sanders has sometimes seemed inattentive to anti-racist, socialist feminist politics. His voting record on these issues is good, but he is less at home on those issues than on something like Medicare for All, as evidenced by his flustered response to Black Lives Matter activists who took the stage while he was speaking in 2015.

No doubt Bernie and his team have learned some lessons, and a 2020 campaign would run much smoother. But even so, there’s reason to prefer someone else—not just because Bernie is an old white guy, but because he’s Bernie. The celebrity fandom that has surrounded this so un-star-like man is funny, but it can also obscure the need to ground our struggles in mass organizing and political substance rather than Obama-esque celebrity. It encourages the newly radicalized to short-circuit the debate over just what “socialism” means, by associating it with Sanders’ somewhat idiosyncratic update of New Deal liberalism rather than exploring more radical possibilities.

Having made the case against him, however, I still find myself resigned to supporting the increasingly probable Bernie redux campaign. Building up a farm system of left-wing politicians at all levels is going to take a while. Keith Ellison once seemed a possible presidential candidate, but his disinterest in that path was probably just as well, given the domestic abuse allegations he now faces. Meanwhile, many rising stars like Ocasio-Cortez haven’t even taken office yet and lack the experience (and age) to run for president.

So the most desirable outcome is, like it or not, Bernie 2020. In their attempts to pander to primary voters, other leading candidates may end up looking and sounding a lot like Bernie. But Sanders has the merit of a lifetime of steadfast commitment to democratic socialist principles, even when that was a recipe for being politically marginal. The Left may be looking healthier, but we still don’t have the clout or the people power to ensure that a president fights for our agenda rather than bowing to the power of big money once corporate lobbyists and donors come knocking.

So, for now, we need to rally around someone who, if victorious, is pretty likely to do the right thing. Building up an advisory infrastructure sans candidate, as Sean proposes, is a good idea, but it’s no substitute for the mass organizing that really holds leaders accountable. Even if that infrastructure can be built out rapidly (and it’s a big “if”), the best staffing and white papers in the world are only going to have an impact if politicians feel popular pressure to pay attention.

If our lack of power is why I’ll support the Bernie campaign, it’s also why—once I’ve submitted this article—I’m not going to think or do much about it for a while. Our attention should be focused on growing the Left rather than expecting another high-profile campaign by a celebrity politician to do it for us. So when you’re done reading this, go dig up your Bernie 2016 swag and put it on, if that gives you inspiration—that’s why there’s still a Bernie lawn sign in front of my house.

Then go organize your workplace, phone bank for your local leftist candidate, or get more involved in your local DSA, Black Lives Matter, or other local grassroots organizing project. This keeps our movement growing between election cycles and lays the groundwork for a movement that wields power in and out of government. It’s by doing that—not by arguing about a presidential election more than two years away—that we avoid what none of us wants: debating whether the only way to recover from Trump’s second term is Bernie 2024.

Peter Frase is the vice chair of the Hudson Valley chapter of the Democratic Socialists of America, and a member of the editorial board at Jacobin magazine. He is the author of Four Futures: Life After Capitalism (Verso, 2016).