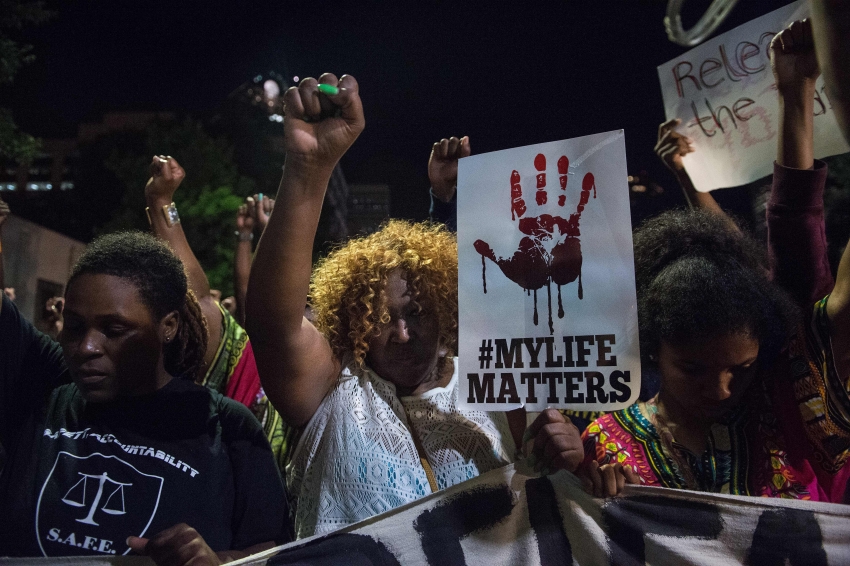 Black Feminism Will Save Us All

Radical political organizing rooted in intersectionality is offering a transformative vision of the world.

Over the past decade, many feminists, especially young feminists, have embraced intersectionality—a framework emerging from black feminism that looks at interlocking systems of oppression around social categories like race, gender, class, disability and sexual orientation. The term has become a popular buzzword, rampant in Twitter profiles and used by Hillary Clinton on the campaign trail.

At a landmark speech at the November 2017 National Women’s Studies Association gathering, NWSA co-chair Premilla Nadasen, a scholar-activist who studies the struggles of low-income women of color for economic and social justice, made a case that we need an intersectional approach now more than ever.

Nadasen asks us to reject a narrow, superficial understanding of race or gender. While giving a brief history of intersectionality, she suggests that intersectionality at its core is a politics of liberation that we can—that we must—all embrace.

Over the past year, we have witnessed unrelenting assaults on the integrity of our electoral system, a rise in authoritarianism, quashing of political dissent and free expression, unrestrained racial violence, a deeper intertwining of state and corporate interests, and a concentration of political and economic power. White supremacy and misogyny have found, not only a home in the White House, but a welcoming platform on college campuses.

As scholars and activists, teachers and writers, researchers and public intellectuals, we are uniquely positioned to intervene in this downward spiral and recalibrate the political direction. Academics (those of us in higher education) and scholars (a category that includes anyone who produces knowledge—including those whose work is primarily in the streets) can provide the analytical tools to make sense of these seismic shifts and offer just alternatives. The urgency before us requires that we ask questions about social transformation, push to decolonize the knowledge of the university, and imagine alternative futures.

Our NWSA theme for this year was inspired by the radical organizing of 40 years ago when a small group of people, calling themselves the Combahee River Collective (after the famous trail carved by Harriet Tubman) met and imagined (like Tubman) a different kind of political future—a vision crafted by the most marginalized, a vision of an anti-racist, anti-sexist, anti-homophobic and anti-capitalist world. Their political vision centered queer black feminism and laid the foundation for what Kimberle Crenshaw later named intersectionality.

The Combahee River Collective statement, along with the scholarship and activism of other feminists of color at the time—including Audre Lorde, Angela Davis, and Cherrie Moraga—was a model of political critique. It offered a theoretical framework for thinking about the instability of gender, and forever transformed how we read and write about women and gender.

The 40th anniversary of Combahee also resonates powerfully with contemporary mobilizations, led largely by women of color, many of whom are queer or embrace a queer politics. Although this may feel like a politically bleak time, we are in a moment of progressive grassroots organizing. And it is some of the most exhilarating organizing we have seen in decades, marked by fierce resistance, fortitude, innovation and calls for fundamental social transformation. These mobilizations have mounted since Trump’s election, but the organizing dates back further and emerged in response to multiple crises wrought by decades of destructive liberal and neoliberal policies. Radical political organizing rooted in intersectionality is offering a transformative vision of the world. We only have to look around us to see this.

Linking the radical black feminist organizing of 40 years ago to the current movements enables us to see queer black feminism not as a politics of a people, but as a politics of liberation, a way to think about social transformation from the point of view of the most marginalized. Anti-racist, queer, feminist, intersectional political formations, have a long genealogy and continue to interrogate hetero-racial normativities and questions of power and consider what a liberatory politics of resistance—for everyone—means.

Our theme for next year builds upon this year’s conference and is centered on radical imaginaries. We hope to engage in collective thinking about not just about past and present, but about the future. Not just about the critique of racial violence, gender injustice, economic exploitation and expropriation, but how to move forward. Although conservative and proto-fascist forces seem to be emboldened across the world, it is imperative that, in addition to analyzing the rise of those forces, that we imagine alternatives. Our theme of imagining justice is inspired

Close to 20 years ago, when the World Social Forums first convened, they adopted the motto, “Another world is possible.” So, in the spirit of the social forum and renewed organizing in the 21stcentury, we invite you to think with us about what that other world will look like.

Premilla Nadasen is currently a professor of history at Barnard College, Columbia University, where she is affiliated with the Barnard Center for Research on Women, the Women’s, Gender, and Sexuality Studies Program, and the Institute for Research in African American Studies. She is co-chair of the National Women’s Studies Association. She also serves on the editorial board of the following academic journals: Women’s Studies Quarterly, Souls: A Critical Journal of Black Politics, Culture, and Society, the Journal of Civil and Human Rights, and sits on the advisory committee of the New York Historical Society’s Center for the Study of Women’s History. Nadasen has given workshops and presentations for the Lower East Side Tenement Museum, the National Domestic Workers Alliance, the Ms. Foundation’s Economic Justice Program, the Department of Labor, and the New York State Labor Committee. Sponsored by history and gender and women’s studies. Women's History Month event.