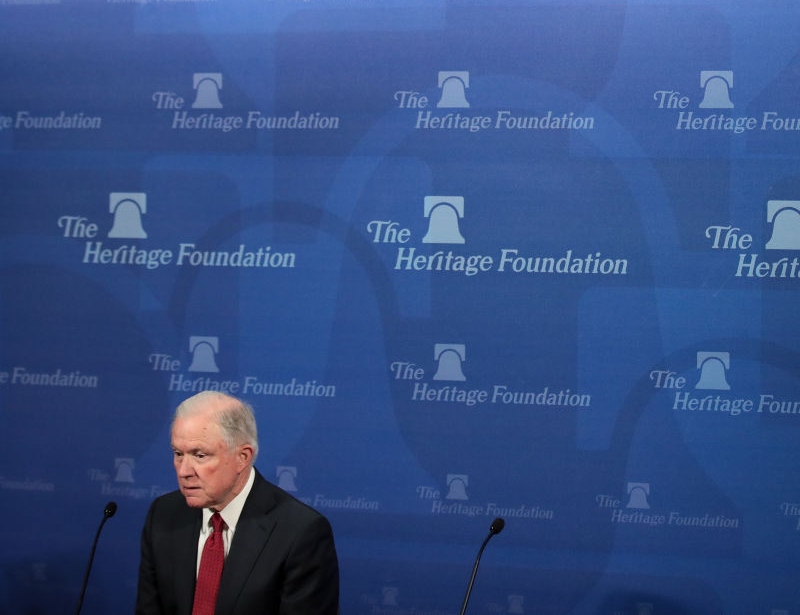 The Increasing Irrelevancy of the Conservative Think Tank

The Heritage Foundation’s star is falling—and left think tanks are on the rise.

With the institutional and ideological exhaustion of the Right, and more broadly of neoliberalism, it is now left think tanks that are filling the void with new ideas and policies.

Starting in the mid-1970s, it became common practice among establishment newspapers to provide positive coverage of conservative think tanks—particularly during Republican administrations. As I explain in my book on the history of conservative think tanks, such stories served a dual purpose. For the think tanks, the stories were essentially press releases that gave them credibility in Washington. For the papers, the stories functioned as a signal of political balance—a sign that conservative intellectuals and policymakers were receiving the same level of exposure as liberal ones.

Through sea changes in the political and media landscape, this trend has persisted. The most recent installment is New York Times Magazine's 7,000-word article on the Heritage Foundation. The heft gives the sense of an exhaustive account, supposedly of Heritage’s ability to stock the Trump administration with its preferred appointees. However, despite all of the spilled ink, the story, as is usually the case, functions primarily as Heritage propaganda, with this central claim left open to question. Most of the sources quoted are from Heritage itself, and these sources are largely taken at face value. Thus, in the end, Heritage gets to tell a story of its own importance while the Times once again gets to show its “balance” by writing a familiar story about the Right.

Today, stories like these are causing fundamental misunderstandings of the current think tank landscape in Washington, D.C.. They inflate the importance of think tanks on the Right and downplay their increasing irrelevancy and sclerotic nature, while leading the public to ignore the more dynamic happenings in think tanks on the Left.

When news organizations like the Times began to publish stories on the rising power of conservative think tanks in the 1970s, they were correct in diagnosing an ascendency. These institutions had begun raising vast new sums of money, a trend that, ironically, was only accelerated by the Watergate scandal. In 1974, four months before the resignation of President Richard Nixon, the American Enterprise Institute (AEI), a well-known conservative think tank in Washington, DC, issued a fundraising appeal to its network of donors. The letter was written by Robert G. Wingerter, the President of the Libbey-Owens-Ford Company, and urged his fellow corporate leaders to support a “credible source such as AEI.” Wingerter fretted that the disclosure of illegal contributions to Nixon’s 1972 campaign by several corporations “has caused all business relations with government to be regarded with mistrust.” He argued that an organization like AEI “seems almost the only way that the business philosophy may receive any serious political attention.”

Wingerter could not have known at the time how right he was. Although conservative think tanks like AEI, the Heritage Foundation and the Hoover Institution had seen growth in their finances in the early 1970s, the unearthing of illegal contributions to Nixon undoubtedly provided further fuel. These organizations, shielded by their tax-exempt, “educational” status, were enormously appealing to conservative corporations and elite conservative activists interested in advancing business-friendly policies without the taint of direct political contributions to candidates. Conservative think tanks became a more respectable conduit for corporate money to achieve political influence.

By the time Ronald Reagan was elected to the presidency in 1980, right-wing think tanks were flush with cash and ready to implement a new conservative agenda through the new president. The Heritage Foundation, in particular, stood ready to staff up the Reagan administration and to make specific policy recommendations.

These institutions also used their new cash to position themselves as the go-to conservative voices in the public sphere. In the 1980s and 1990s, every media outlet in the country knew that, if you needed an easy conservative opinion for a story, you could call a conservative think tank.

If the story of the late 20th century is one of conservative think tank success, the dynamics in the 21st might just prove to be their undoing. In the 1980s and 1990s, “the media” was understood as three main venues: broadcast, print and radio. Now, with media fragmentation and the rise of numerous explicitly conservative media forms on the internet, as well as in more traditional venues from Fox News to Breitbart, conservative think tank voices have lost their selling point of being one of the few go-to conservative voices.

Their finances may also become precarious. While these institutions served as respectable outlets for political donations in the shadow of Watergate, why would corporations or wealthy individuals choose such a circuitous route for their donations in the aftermath of Citizens United,? True, corporations and wealthy conservatives may have enough money to spread around, but they likely will start to get wise and direct money away from places like Heritage and AEI in the future.

These institutions have even lost their luster when it comes to their last major role in the conservative movement: staffing up Republican presidential administrations. While the June New York Time Magazine piece contains a lot of Heritage Foundation spin on this subject, it is unconvincing. In many ways, the author of the piece and the editors at the Times bury the lead of the story in the final two paragraphs. For those who slog all the way to the end, the story actually notes that several high-profile staffers that came directly from the Heritage have washed out of the administration quickly and are now back at the think tank. For instance, Paul Winfree, who made news in this publication for his aspirational hacksaw budget proposal while in the Trump administration, is now back at Heritage, and his proposal went nowhere while he was there. Again, according to the end of the Magazine piece, other Heritage luminaries are also back at the think tank after a stint in the Trump administration including “Stephen Moore, who worked on the Trump tax cuts; David Kreutzer, who played a key role in dissolving a White House working group that was studying the monetary costs associated with climate-warming carbon dioxide; and Hans von Spakovsky, who helped run the now-defunct voter-fraud commission, which was created to find evidence to support Trump’s baseless claim that millions of people voted illegally for Hillary Clinton.” Finally, again according the conclusion of the piece itself, “A number of other senior advisers seem to be on shaky ground with the president, and an exodus is anticipated after the November midterm elections.”

For those that have hung on, the “ideas” that they have helped put into practice feel stale: tax cuts for the wealthy and deregulation straight from the 1970s and 1980s; immigration restrictions and civil rights rollbacks straight from the late 19th and early 20th centuries. In contrast to the 1970s, when conservative think tanks felt new and vibrant, today they feel stale and ideologically exhausted. In the end, this may be the biggest institutional problem of all—conservative think tanks are part of a movement likely at the end of the line—bereft of policy ideas that speak to the needs of the present and the future—including precarious employment, stagnant wages and rampant inequality.

Which brings me to where the real energy seems to be these days: the Left. Over two years ago I wondered in the pages of Jacobin whether a socialist think tank was needed to give the emerging American left a new ability to articulate and plan policy. It seems as if this just might be happening—although it is too early to tell. Whether it is Sean McElwee using his think tank to push the “Abolish ICE” movement; Matt Bruenig at the People’s Policy Project arguing for Medicare-for-All; Mike Konczal’s work at the Roosevelt Institute on financial reform; or the ongoing work of Demos across a range of progressive issues, left politics seems to be where the new ideas and energy lie. Just as in the 1970s, when postwar liberalism was experiencing ideological exhaustion, opening a space for new conservative think tanks pushing neoliberal political economy, we are witnessing something similar today with the roles reversed. With the institutional and ideological exhaustion of the Right, and more broadly of neoliberalism, it is now left think tanks that are filling the void with new ideas and policies in response to this decline. Only time will tell whether they will be as successful as the the right in their implementation. For now, the New York Times might want to try covering the left think tanks in order to be, for once, ahead of the curve.

Jason Stahl is a Senior Lecturer in the Department of Organizational Leadership, Policy and Development at the University of Minnesota, Twin Cities. He is the author of Right Moves: The Conservative Think Tank in American Political Culture since 1945 (University of North Carolina Press)