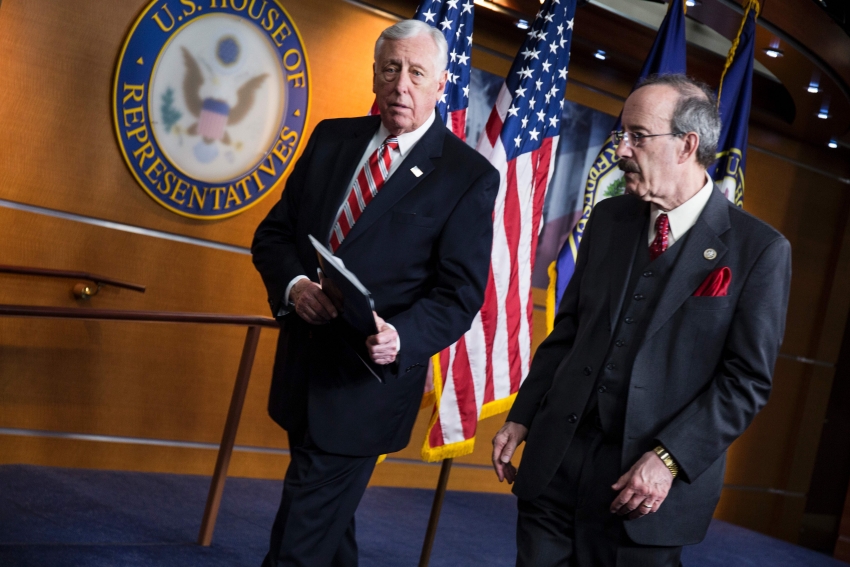 Top Dems Claim Concern Over Yemen War—Why Aren’t They Backing a Measure To End It?

Some of the most influential Democrats in the House are refusing to throw their early support behind a new push to end U.S. participation in the Saudi-led war on Yemen.

Yet, lawmakers’ declarations of outrage do nothing to shut down U.S. involvement in the war, which began in March 2015 under former President Barack Obama without a congressional debate or vote.

Despite claiming concern over U.S.-backed atrocities in Yemen, some of the most influential Democrats in the U.S. House are refusing to publicly endorse the latest political effort to end the U.S. role in the Saudi-led war. That effort would attempt to put a stop to American participation in the devastating military intervention by invoking the War Powers Resolution. For more than three years, the United States has provided intelligence, arms and mid-air refueling for the Saudi-led bombing campaign as it has hit hospitals, weddings and schools—and killed tens of thousands.

Announced September 6, the resolution—expected to be formally introduced in the coming days—will aim “to withdraw U.S. Armed Forces from unconstitutional hostilities alongside Saudi Arabia in Yemen,” according to a statement from Rep. Ro Khanna (D-Calif.). Khanna is leading the effort, alongside a handful of other Democratic representatives, including Mark Pocan (D-Wisc.) and Adam Smith (D-Wash.). The new push comes on the heels of a prior Senate effort to invoke the War Powers Resolution in order to withdraw the U.S. military from the unauthorized war. That legislation was narrowly defeated in March.

The office of Eliot Engel, the top Democrat on the House Foreign Affairs Committee, is declining to formally endorse the effort at this time, a move that would signal to Democrats that supporting the effort is backed by Democratic leadership, which would signal to Democrats to support it. “The resolution hasn’t been introduced yet, so Mr. Engel will need to review the final text once that takes place,” Tim Mulvey, the Democratic Communications Director for the House Committee on Foreign Affairs, told In These Times over email.

Rep. Steny Hoyer (D-Md.), number two in the House’s Democratic leadership, hedged at the question of whether he would endorse the legislation. “I look forward to reviewing the text of the forthcoming resolution, and I want to thank Congressman Khanna, Ranking Member Smith, and Congressman Pocan for their leadership in keeping Congress focused on addressing this horrific humanitarian crisis, which has put millions at risk of starvation,” he told In These Times via email.

While both Engel and Hoyer indicate they are open to backing the legislation, they are withholding their endorsements.

Robert Naiman, policy director for Just Foreign Policy, a group that has agitated for Congress to invoke its war powers to end the Yemen war, rejects their explanations. “Hoyer and Engel know very well what the resolution is going to say,” he told In These Times. “It's not a mystery. The resolution is going to require that all unconstitutional U.S. participation in the Saudi war in Yemen has to stop, including refueling Saudi-UAE warplanes in the middle of their bombing runs.”

“Saying they have to wait and see is just a way to try to dodge accountability for a war they have supported,” Naiman added.

Mazzen Mohammed, a resident of Yemen’s northern province of Al-Jawf, told In These Times he is skeptical of U.S. lawmakers' real motives for refusing to end the war, noting that if weapons sales cease, the United States “will lose money.” He argued that stopping the war would help the United States to “avoid criminal prosecution in the future” and “restore some of its human values.”

The office of Nancy Pelosi (D-Calif.), the most powerful Democrat in the House, did not respond to multiple requests for comment.

Early support from Pelosi, Hoyer and Engel would send a strong message to the top Democratic Party that backing the forthcoming legislation is encouraged by leadership. Given the composition of Congress, it will be difficult for any resolution to pass without overwhelming support from Democrats.

Hoyer and Engel are declining to openly support the legislation despite having signed onto an open letter on August 14 to Secretary of Defense James Mattis expressing “our deepening concern regarding the humanitarian crisis in Yemen and to request a briefing for all House Members during the first week of September on the policy objectives of the United States with respect to Yemen.”

That September deadline passed without a briefing from Mattis, yet the letter’s signatories have not indicated that they plan to do anything about it. The letter was released in the aftermath of the Saudi-led coalition’s air strike, with a U.S.-supplied and manufactured bomb that hit a school bus in Yemen’s northern Saada province, killing 54 people, 44 of them children.

In his email to In These Times, Hoyer dodged questions about whether he plans to take any action. “In August, I joined with my Democratic colleagues in the House in sending a letter to the Trump Administration, asking them to brief Congress on the United States’ policy objectives in Yemen,” he said. “Nearly a month later, we have yet to receive a response. Members deserve information about the impact of the crisis, U.S. support for the Saudi coalition, and the prospects for a peace agreement.”

Yet, lawmakers’ declarations of outrage do nothing to shut down U.S. involvement in the war, which began in March 2015 under former President Barack Obama without a congressional debate or vote. The Trump administration continued giving U.S. military support to the Saudis despite indications that the U.S. government's involvement amounts to facilitating war crimes.

While Congress prepares to invoke the War Powers resolution another time, conditions in Yemen continue to deteriorate rapidly. With U.S. participation, the Saudi-led coalition’s repeated bombing of schools and hospitals has led to the collapse of the educational and health sectors, while its targeting of food and water supplies along with the economic blockade, has left millions starving. With no access to clean water or vaccinations for millions of Yemenis, two waves of cholera have infected at least 1.1 million people—the largest outbreak in modern history—with health professionals warning that a third wave of the epidemic is coming.

The death toll of children from preventable illnesses and starvation is staggering: 63,000 children died in 2016 and another 50,000 in 2017—a total of 113,000 in just two years of the ongoing war. An entire generation of Yemeni children is facing death by starvation, diseases, or bombs.

In Yemen, this war is broadly viewed as an American, Saudi and Emirati war on their country. Posters in Yemen declaring, “America Kills Yemeni People” are prevalent, and remnants of bombs with U.S. markings are often found at bomb sites such as markets, funerals, hospitals and other civilian areas.

In These Times asked Yemenis about the hesitation of some members of Congress to declare public support for the upcoming resolution to end the war.  Belqes Hussein of Sana’a says that members of Congress “understand that [the] Yemen war is a catastrophe in which innocent Yemenis are paying a high price, and accordingly they wish to end the U.S. involvement in this horrific conflict. But, in the meantime, they view this war as a legitimate means to confront the Iranians’ aggression inside the region.”

Saleem Abdullah, a resident of Hodeidah, told In These Times, “After killing countless people in Yemen with US help and after destroying Yemen completely and making a mess out of this poor country, it seems the U.S. just realized this now and wants to maintain whatever remains of their reputation. They also don’t want to lose whatever contracts they have with Saudi and want to show Saudi and UAE that their support is still strong.”

Abdullah emphasized, “Both Saudi and USA destroyed Yemen from A to Z, are considered war criminals, and should get punishment.”