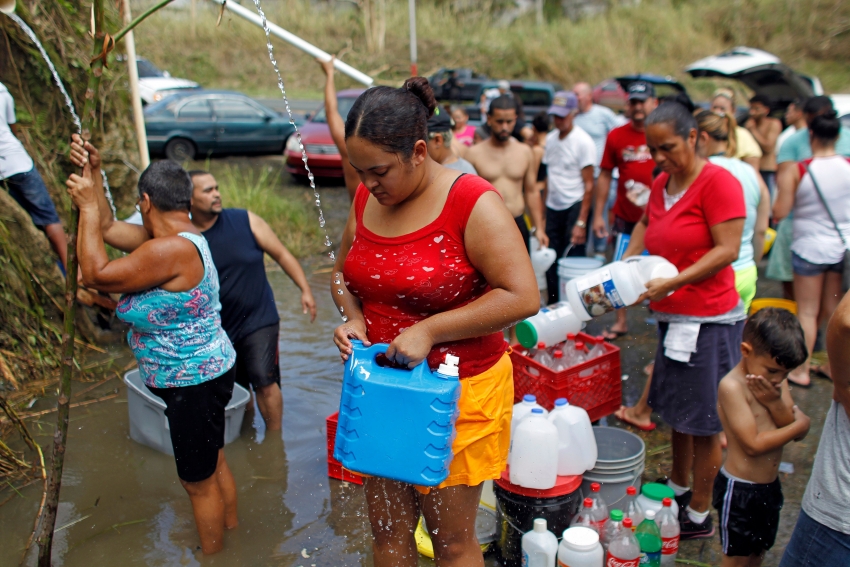 People collect water from a natural spring created by the landslides in a mountain next to a road in Corozal, west of San Juan, Puerto Rico, on September 24, 2017 following the passage of Hurricane Maria. (RICARDO ARDUENGO/AFP/Getty Images)

Being poor and trapped by a hurricane can become a deadly condition.

Thanks to climate change, natural disasters are claiming even more lives — and poorer neighborhoods are disproportionately paying the price.

As Puerto Rico marked the one-year anniversary of Hurricane Maria, with its communities still hobbled by catastrophic damage and lack of access to basic services like electricity and healthcare, Hurricane Florence hovered over the Carolinas, wreaking extra havoc due to slower storm movement.

Thanks to climate change, storm systems like Florence are staying for longer in one geographic area, dealing even further damage to already-suffering communities. The health consequences have been deadly, and for poorer communities, even deadlier.

This is the new reality: Natural disasters like hurricanes are increasing in intensity thanks to global warming and rising sea levels, and they have even more potential to harm the communities they hit.

We know how much natural disasters can harm communities. New Orleans still feels the impact of Hurricane Katrina over a decade later. Communities are still recovering from Sandy, Harvey and other catastrophic storms that tore through neighborhoods and devastated already underserved, underprivileged and vulnerable families.

We often talk about the aftermath of hurricanes in terms of economic plight, lack of access to food and clean water, harrowing scenes of towns under water and homes completely gutted or reduced to rubble. We need to talk more about the impact of climate-fueled natural disasters on people’s health. What will the increased intensity of natural disasters due to climate change mean for low-income and underprivileged communities?

All too often, affected communities face more than one disaster, sometimes with little-to-no time to recover. For children, the elderly, and people with pre-existing conditions, the consequences of even just one disaster can be particularly deadly. Take the harrowing story of a man whose wife experienced complications after surgery during Hurricane Harvey and was unable to get life-saving help. Or a woman’s story about the terrible consequences of being poor and living in public housing when a natural disaster strikes.

Consider how many American communities are located in high-risk, flood-prone, fire-prone or otherwise vulnerable areas, and already face limited access to health and medical resources. Weather-related disasters exacerbate problems with accessing health services, particularly emergency services. Floods, for instance, can cause drownings and physical injuries and heighten the risk of water-borne diseases. They can also turn mild health scares into life-threatening emergencies when access to supplies of daily necessities like insulin, oxygen tanks or heart medicine becomes impossible.

Studies have documented how living in poverty or being a poor person of color can exacerbate medical conditions like diabetes or cancer and impact access to healthcare and treatment. Add to that the complications of getting access to a doctor or clinic or emergency room during a storm, and the risk grows exponentially.

Thanks to climate change, natural disasters are claiming even more lives — and poorer neighborhoods are disproportionately paying the price. Recently, a study by the George Washington University Milken Institute of Public Health noted the extent to which low-income residents in poorer areas of Puerto Rico were disproportionately at risk of health complications or death during Hurricane Maria.

According to a report by the World Health Organization, “Rising sea levels and increasingly extreme weather events will destroy homes, medical facilities and other essential services. More than half of the world's population lives within 60 km of the sea. People may be forced to move, which in turn heightens the risk of a range of health effects, from mental disorders to communicable diseases.”

Around the world, health organizations are already seeing a drastic rise in the number of “climate refugees,” people who are displaced by the effects of climate change on their communities. Imagine what it’s like for people in similarly desperate situations who can’t even evacuate because they can’t afford to.

We'd like to think that this is a problem for other countries, but our fellow Americans are facing this head on. Right now, displaced Puerto Rican families are still stuck in temporary housing situations in Florida and other states. Many of them have been kicked out of hotels by FEMA, and many are struggling to find new jobs and places to stay. Back in Puerto Rico, the notorious blue tarp canvasses still cover homes, and repairs to utility outages are still slow. Hospitals still report incredible shortages of resources.

Climate change is not going away, and the natural disasters that hit are going to get worse and worse. There will be more Marias and Harveys and Katrinas. People’s health is at stake, and we need to address the health crisis that is already emerging. Better funding for disaster preparedness resources at the federal and state level will be critical, and so, too, will be expanding access to healthcare in the poorest communities, so when disaster strikes, it’s easier to save lives in the communities that are inevitably hit the hardest.

Olivia Alperstein is the Media Relations Manager for Physicians for Social Responsibility.