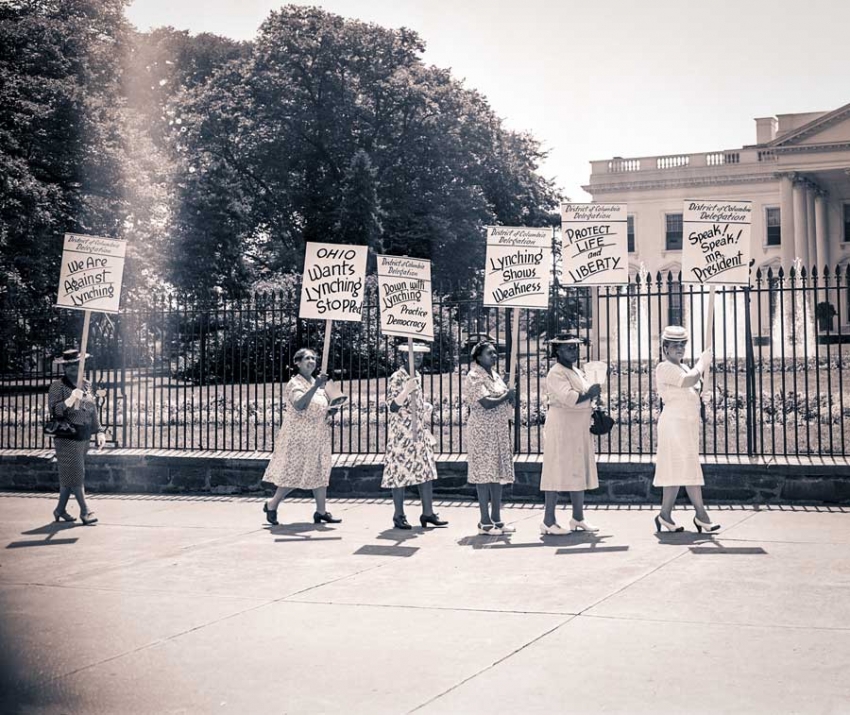 Members of the National Association of Colored Women picket the White House on July 30, 1946, to protest the lynching of four Black people in Georgia. (Bettmann/Contributor)

Since at least the 1830s, Black women have organized, campaigned, and voted for issues that matter to us most.

We are not long-suffering martyrs, mammies, aunties or mules—we are astute, hypervigilant, educated breadwinners.

Democrat Doug Jones just barely defeated Republican candidate (and documented gay-bashing, Biblethumping sexual predator and pedophile) Roy Moore in Alabama’s 2017 special election. Jones is the first Democrat in Alabama to be elected to the Senate since 1992. Headlines across America overwhelmingly credited Black women as the major driving force behind this historic victory, and it’s true: 98 percent of Black women voted for Jones.

Predictably, though, the social and traditional media responses in the immediate aftermath, as framed by white progressives and journalists, told a tiresome story, one that repeated a trope that unconsciously frames Black women’s participation as an investment in America. “Black Women Saved America Last Night, Again,” read one headline in Paper magazine.

Such headlines misunderstand a crucial point: Black women’s voting participation is not an investment in America, but an investment in ourselves. Black women vote first and foremost for our own interests, which generally fall outside of either party line. We vote for wage parity, for improvements to transportation so we can travel safely and affordably, for access to healthcare, for repairing the criminal justice system that has unapologetically disrupted the social fabric of our families for generations. According to 2017 polling by the Black Women’s Roundtable and Essence, affordable healthcare was a top concern and, for the first time, hate crimes made the list, too. Forty-nine percent of Black millennial women noted criminal justice reform among the “top three issues facing the Black community,” and 21 percent of Black women said none of the political parties represented them well. The Movement for Black Lives Coalition, too, has stated “that neither mainstream political party has our interests at heart.” Black women have had a long history as tireless political organizers—putting our own interests first—even before suffrage was extended to us.

That organizing began at least as early as the 1830s with the National Negro Convention movement. The organizers of the interracial abolitionist meetings were male, but a few Black women attended and supported this critical early movement building. When slavery ended, Wanda Hendricks writes in Black Women in America, “Church membership, voluntary associations, mutual aid societies, and women’s organizations afforded them the opportunity to build a strong race-conscious, female-centered community.”

The Convention gatherings provided the training for Black women activists to found national associations like the National League of Colored Women and the National Federation of Afro-American Women, which consolidated in 1896 into the National Association of Colored Women (NACW). Founding their own organizations allowed Black women to begin conversations that addressed issues impacting Black lives, such as lynching. White women’s clubs, like the General Federation of Women’s Clubs, refused membership to Black women.

The Alpha Suffrage Club, founded in 1913 by Ida B. Wells-Barnett and her white colleague Belle Squire, taught Black women about the political process. A few months after the club’s founding, when Illinois became the first state east of Mississippi to allow women to vote in municipal politics, Wells-Barnett and other Black women in the club canvassed neighborhoods to get out the vote for the independent African-American candidate of the time.

“Because the women were tied to issues rather than to parties, not all the candidates they endorsed were members of the two ruling parties,” Hendricks writes. “As a result, the political machines and their candidates often found themselves actively seeking the women’s endorsement.” In 1915, the “clout of the Alpha Suffrage Club in mainstream politics,” along with grassroots efforts by the NACW, played an important role in electing Oscar DePriest as Chicago’s first Black alderman. They canvassed and educated Black women who, in turn, cast one-third of the total votes. DePriest later became the first Black member of Congress elected, in 1928, outside of the South. He was the only African American serving in Congress during his three terms.

Of course, after suffrage, there were still significant barriers—particularly in the South—in the way of Black women’s vote: literacy tests, poll taxes, and, for decades, brutal violence against Black voters— all part of a matrix to suppress political activity.

Despite these barriers, Black women have continued our legacy of political organizing. We actively educate ourselves on political candidates who fight for issues we care about. Jones’ victory is a key example of this. LaTosha Brown, co-founder of Black Voters Matter Fund, writes in the 2018 Black Women’s Roundtable Report:

The messaging of the national Democratic Party was not what won the election. It was people on the ground from the same communities we were reaching out to, with… the cultural competency to speak to our folks in a way that held meaning for them. The national political operatives made their message about the candidates. We weren’t in love with either of the candidates… so we made the message about us, and organized on messages… like “It’s About Us,” “Black Voters Matter,” “Woke Vote,” “Power of the Sister Vote” and “Vote or Die.”

Black women organizers from the NAACP led a grassroots strategy to get out the vote with these messages at the forefront. Black Voters Matter Fund, Woke Vote, VoteRiders, BlackPAC and many others did painstaking, behind-thescenes work, which included driving voters to the booths (access to affordable transportation being a major deterrent in Alabama).

“This was not, and I repeat was not, about any affection for senator-elect Doug Jones, a Democrat,” Brown stresses.

The national reception to Jones’ win is a telling indication of how often our invisible work remains so. While Black women candidates like Stacey Abrams in Georgia, Ayanna Pressley in Boston and Ilhan Omar in Minnesota have been running campaigns to break down critical remaining political barriers of race, geography, gender and class, most narratives in media have made them sound like a new crop of political organizers. A Vox story, about how the approaching midterms are changing how Black women interact with the Democratic party, reads, “In 2018, black women like Ayanna Pressley are fighting for political power and winning.” But we have always been fighting for political power.

Black women are often erased from civil rights lore, such as Jo Ann Robinson and Mary Fair Burks of the Women’s Political Council—masterminds behind the Montgomery Bus Boycott. But we write ourselves back into the story, persistently. We are not long-suffering martyrs, mammies, aunties or mules—we are astute, hypervigilant, educated breadwinners. Yet, we make 63 cents to every dollar a white man makes, are the sole primary breadwinners (or earn at least 40 percent of household income) in 80.6 percent of our families, and are twice as likely to be imprisoned for the same crime and three times as likely to die during childbirth as our white peers. Inequities like these are how we started to care more about voting for candidates with solutions and less about a party line.

Hamer ran for Congress in 1964 on the MFDP’s Freedom Ballot, which, unlike the Democratic Party, placed her name next to white candidates. She defeated her opponent, Congressman Jamie Whitten, but the state refused to acknowledge the ballot as valid. So Hamer didn’t make history as a congresswoman.

She did, however, plant the seed. At least 39 Black women ran for seats in the House this year, to help that seed take root—and bloom.

Joshunda Sanders is an author living in New York where she teaches writing at The New School.