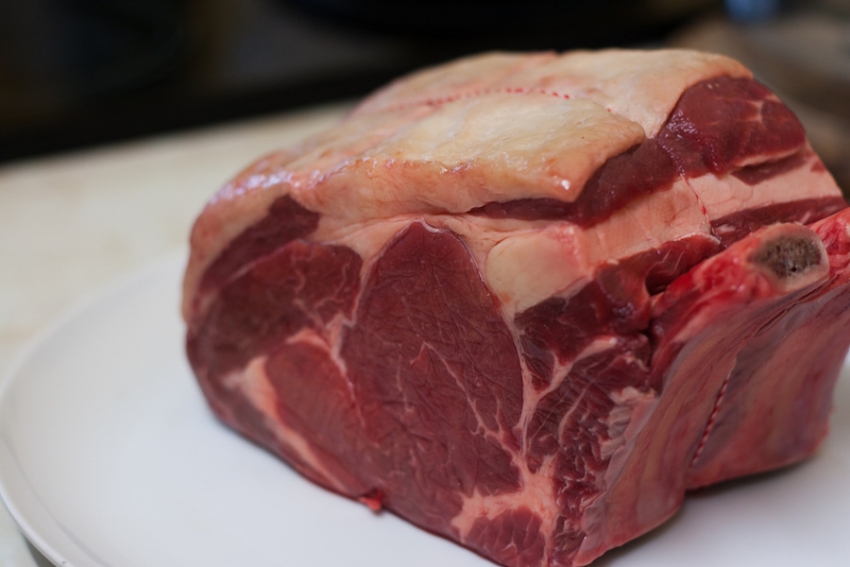 Climate-Friendly Beef Is a Myth. Don’t Buy It.

There’s no way around it: Take on the meat industry or face ecological disaster.

The American appetite for burgers and steaks contributes 337 billion pounds of greenhouse gas emissions—equivalent to more than 30 million cars—each year.

For other perspectives, read “We Can Fight Climate Change and Still Eat Beef” and “Anything Cows Can Do, Elk Can Do Better.”

It’s undeniably clear: We need to take drastic action to address the climate crisis. And it can’t wait.

Much of the climate movement’s focus has been on taking down fossil fuels, but there’s consensus that animal agriculture also poses a problem. Those who want to have their beef and eat it too claim grassfed beef is a way to mitigate the environmental harms associated with raising cattle in factory farms. They suggest that grazing cattle are actually good for the environment because they help the land to capture carbon and sequester it in the ground.

But grass-fed beef is no fix. Most pasture-raised cows actually have a worse carbon footprint than their factory farmed counterparts. Only under certain rotational system s can grass-fed operations sequester significant carbon— and there’s no evidence that this model can be scaled to meet current demand.

There’s simply not enough land. Switching America’s beef from factory farms to grass-fed might free up some cropland used to grow corn feed, but it would greatly increase grazing land. A recent Harvard study found it would require 30 percent more cattle for the same amount of beef, as pasture cows grow more slowly and don’t reach the same weights. But, the study found, existing pastureland could only support 27 percent of current production.

Livestock already occupy more than 25 percent of Earth’s ice-free land, with 70 percent of all agricultural land dedicated to feed or grazing. Grazing is a leading driver of desertification, and every minute, seven football fields’ worth of land is bulldozed to create room for more livestock and feed crops—land that was once home to wild animals and biologically diverse ecosystems. Many of these destroyed ecosystems—from forests to prairies, marshes to grasslands—play a key role in absorbing carbon dioxide and filtering water sources.

On the heels of the UN’s October warnings, a report in Nature found that Americans must reduce their beef consumption by about 90 percent to curb the climate crisis and feed the growing population.

But the world is on the opposite path: Meat production roughly tripled worldwide between 1980 and 2010 and is expected to nearly double again by 2050, with consumption and population growth. The United States leads the way, consuming four times the global average of beef.

Researchers found that the American appetite for burgers and steaks contributes 337 billion pounds of greenhouse gas emissions—equivalent to more than 30 million cars—along with 489 billion pounds of manure, and uses more than 21 trillion gallons of water each year.

While beef might be the worst environmental offender, animal-based foods as a whole come with larger carbon footprints—as well as more water use, waste and pollution—than plant-based ones. We need to consume less meat and dairy, and instead eat many more fruits, vegetables, nuts and beans.

Reducing your personal meat consumption is important, with a greater impact than driving a fuel-efficient car or eating an entirely local diet. But individual change is not enough. We need governments to support Earthfriendly diets, and big corporations need to drastically change as well.

Governments and companies should adopt policies to promote plant-based foods and make them more affordable and widely accessible. Livestock producers must be held accountable for pollution, and the federal government needs to stop bailing out meat and dairy with unfair subsidies that externalize environmental costs, surplus purchases that manipulate market prices, and labeling restrictions aimed at making plant-based options less competitive.

The government should instead subsidize the production of healthy fruits and vegetables, which receive next to no subsidies. In fact, the United States currently does not produce or support the production of enough fruits and vegetables to meet the recommendations of its own national dietary guidelines. Plant-based items should be on every menu, from fast food to fine dining, to make it easier for everyone to make climate-friendlier choices.

Several countries are showing how to encourage more sustainable diets. The Netherlands, for example, released 2016 dietary guidelines that call for no more than two servings of meat per week. Sweden directly links meat consumption to environmental damage in its guidelines, and calls for people to reduce the meat in their diets.

If the United States called for reduced meat consumption in its federal dietary guidelines, it would have widespread influence over nutrition education and the menus in schools, prisons, hospitals and government cafeterias. If we’re going to answer the climate wake-up call, we need to shift to healthy, plant-forward diets supported by sustainable food policy.

For other perspectives, read “We Can Fight Climate Change and Still Eat Beef” and “Anything Cows Can Do, Elk Can Do Better.”