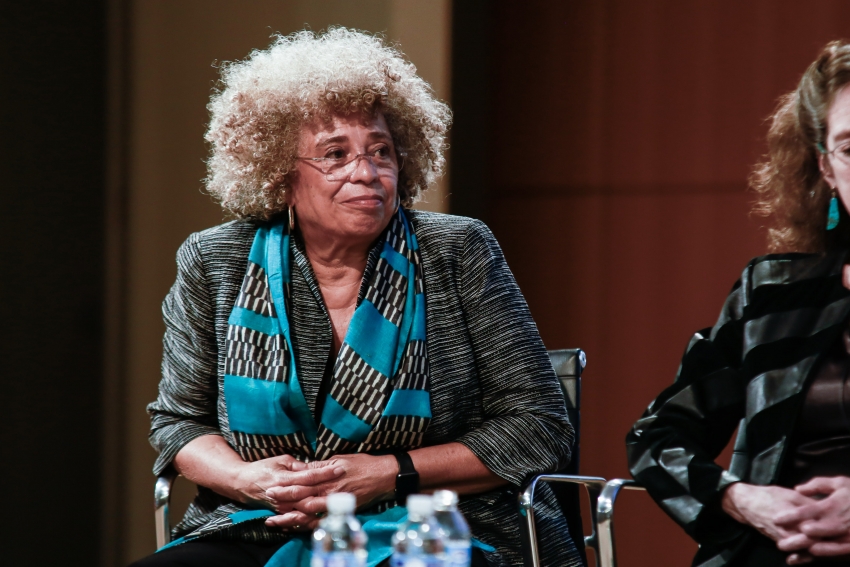 Civil rights icon Angela Davis has been fighting against injustice for decades. (Photo by Gonzalo Marroquin/Patrick McMullan via Getty Images)

Angela Davis: Rescinding of Civil Rights Award Is Attack on “the Indivisibility of Justice”

After an outcry from some Jewish groups over her support for Palestinian justice, Davis saw a prestigious civil rights award revoked. Here is her statement.

In October, the Birmingham Civil Rights Institute announced that it would be presenting Angela Davis with the Fred Shuttlesworth Human Rights Award, established to honor those who carry on the legacy of the great civil rights leader. The award ceremony is planned for February.  But following objections made by some Jewish groups over Davis’ longtime support for Palestinian human rights, on January 5, the board of the Birmingham Civil Rights Institute abruptly announced that it would be rescinding the award.

In These Times has covered Davis and her fight against injustice for decades, and here we present her statement responding to the revocation.

On Saturday, January 5, I was stunned to learn that the Birmingham Civil Rights Institute Board of Directors had reversed their previous decision to award me the Fred Shuttlesworth Human Rights Award. Although the BCRI refused my requests to reveal the substantive reasons for this action, I later learned that my long-term support of justice for Palestine was at issue. This seemed particularly unfortunate, given that my own freedom was secured – and indeed my life was saved – by a vast international movement. And I have devoted much of my own activism to international solidarity and, specifically, to linking struggles in other parts of the world to U.S. grassroots campaigns against police violence, the prison industrial complex, and racism more broadly. The rescinding of this invitation and the cancellation of the event where I was scheduled to speak was thus not primarily an attack against me but rather against the very spirit of the indivisibility of justice.
I support Palestinian political prisoners just as I support current political prisoners in the Basque Country, in Catalunya, in India, and in other parts of the world. I have indeed expressed opposition to policies and practices of the state of Israel, as I express similar opposition to U.S. support for the Israeli occupation of Palestine and to other discriminatory U.S. policies. Through my experiences at Elizabeth Irwin High School in New York City and at Brandeis University in the late fifties and early sixties, and my subsequent time in graduate school in Frankfurt, Germany, I learned to be as passionate about opposition to antisemitism as to racism. It was during this period that I was also introduced to the Palestinian cause. I am proud to have worked closely with Jewish organizations and individuals on issues of concern to all of our communities throughout my life. In many ways, this work has been integral to my growing consciousness regarding the importance of protesting the Israeli occupation of Palestine.
The trip to Birmingham, where I was born and raised, to receive the Fred Shuttlesworth Award, was certain to be the highlight of my year—especially since I knew Rev. Shuttlesworth personally and attended school with his daughter, Patricia, and because my mother, Sallye B. Davis, worked tirelessly for the BCRI during its early years. Moreover, my most inspirational Sunday School teacher Odessa Woolfolk was the driving force for the institute’s creation. Despite the BCRI’s regrettable decision, I look forward to being in Birmingham in February for an alternative event organized by those who believe that the movement for civil rights in this moment must include a robust discussion of all of the injustices that surround us.

Angela Davis is a political activist, writer and scholar. She is distinguished professor emerita at the University of California, Santa Cruz, and founder of Critical Resistance, a grassroots organisation that campaigns to end imprisonment as a solution to social problems.