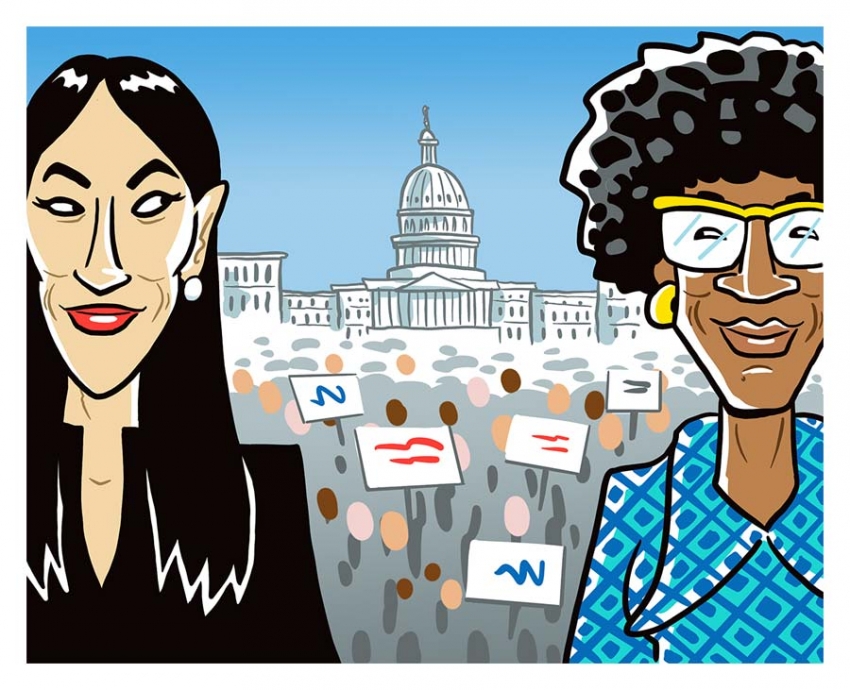 Not Here To Behave: What Alexandria Ocasio-Cortez and Shirley Chisholm Have in Common

Like Shirley Chisholm and Ella Baker, when candidates like Ocasio-Cortez and Rashida Tlaib enter the halls of power, they bring their people with them.

The elections of Reps. Rashida Tlaib (D-Mich.) and Alexandria Ocasio-Cortez (D-N.Y.) were victories for social movements, and two progressive “outsiders” are now on the inside. But what can the Left expect from these insurgent Democrats? The lives of Shirley Chisholm and Ella Jo Baker, two 20th century political figures who challenged the establishment of their day while maintaining strong movement ties, offer us insight.

When outsiders are allowed into the inner sanctums of power, the first condition is that they assimilate. Shirley Chisholm, a tough-talking former school teacher from Brooklyn with Caribbean roots who became the first black woman elected to Congress in 1968, recalled how her colleagues, believing she didn’t “understand politics,” tried to “educate” her about Washington’s horse-trading ways.

Democrats have already tried to instruct Ocasio-Cortez on how to behave. “She doesn’t understand how the place works yet,” Rep. Kurt Schrader (D-Ore.) told the press. When Ocasio-Cortez lobbied for a place on the House Ways and Means Committee, an anonymous “senior House lawmaker” told Politico, “It totally pissed off everyone. … You don’t get picked for committees by who your grassroots [supporters] are.”

Insider status is a privilege. New members of the club are expected to play by the rules. As James Baldwin observed, that is “the price of the ticket.”

The second condition for outsiders is that, once admitted, they distance themselves from the movements that got them elected. “When I first came to Washington, I would sometimes confide to other members how I wanted to help the people of my community,” Chisholm writes in her memoir, Unbought and Unbossed. “It became embarrassing. I was talking a foreign language to some of my colleagues when I said ‘community’ and ‘people.’ ”

What scares the establishment is not that a single Black or Latinx or Arab-American or indigenous woman is allowed “inside” the corridors of power, but that she gives voice to the communities that elected her. During Supreme Court Justice Sonia Sotomayor’s confirmation hearings, critics were outraged by a 2001 speech in which she suggested an experienced Latina elder might in some cases possess better judgment than a privileged white male “who hasn’t lived that life.” That is what the establishment fears: not that newcomers look different, but that they bring with them a set of values, ideas and sensibilities validated in oppressed communities. The “price of the ticket” for inclusion often means conformity.

“I did not come to Congress to behave myself and stay away from explosive issues so I can keep coming back,” Chisholm wrote. She served in Congress on her own terms and in 1972 made a bid for the presidency, an audacious move by a black woman at the time. She did so against the advice of supposedly admiring insiders. And when the radical Black Panther Party endorsed her, she accepted their support, refusing to conform to liberal expectations that she distance herself from the more militant wing of the Black Power movement.

Ella Jo Baker, an intellectual and political force in the Black freedom movement, was, like Chisholm, a consummate outsider. From the 1930s until her death in 1986, Baker never held political office, served as a charismatic leader nor headed a major civil rights organization. Yet in her work alongside the likes of Thurgood Marshall, W.E.B. DuBois and Dr. Martin Luther King Jr., Baker wielded power as an “outsider within” and earned the respect of generations of grassroots organizers. Some of the men she worked with labeled her a “difficult woman,” and she wore the moniker proudly. She did not kowtow to those at the table, and she demanded the inclusion of those not in the room.

Like Chisholm and Baker before them, Ocasio-Cortez and Tlaib are not dazzled simply to be in the club nor intimidated by the threats of marginalization lobbed at them. When Tlaib called for Trump’s impeachment, she used gritty language from the street, not the parlance of the elite. In response, Ocasio-Cortez tweeted to Tlaib that “I got your back” and the “GOP lost entitlement to policing women’s behavior a long time ago. Next.”

Ocasio-Cortez insists on advancing a Green New Deal, and Tlaib is pushing for a delegation to Palestine. When Rep. Eliot Engel (D-N.Y.) admonished Tlaib to instead “listen and learn,” Tlaib evoked her Palestinian family in a tweet: “I hope you’ll come with me on the trip to listen and learn. My sity (grandmother) will welcome you with an embrace & love.”

Baker often asked those she met: “Who are your people?” She wanted to know your ties to family, community and political traditions; whose side you were really on. It was as much an admonition as a question.

As the grassroots trainer Marshall Ganz has explained, “transactional leadership” is “horse-trading” or “operating within the routine” that is “practiced to maintain, rather than change, the status quo.” On the other hand, “transformational leadership” typically “engages followers in the risky and often exhilarating work of changing the world.”

Transformational leadership is a two-way street: We on the Left will have to buoy the new progressive insiders as they buck the status quo, reminding them that we are their people, and they are ours.