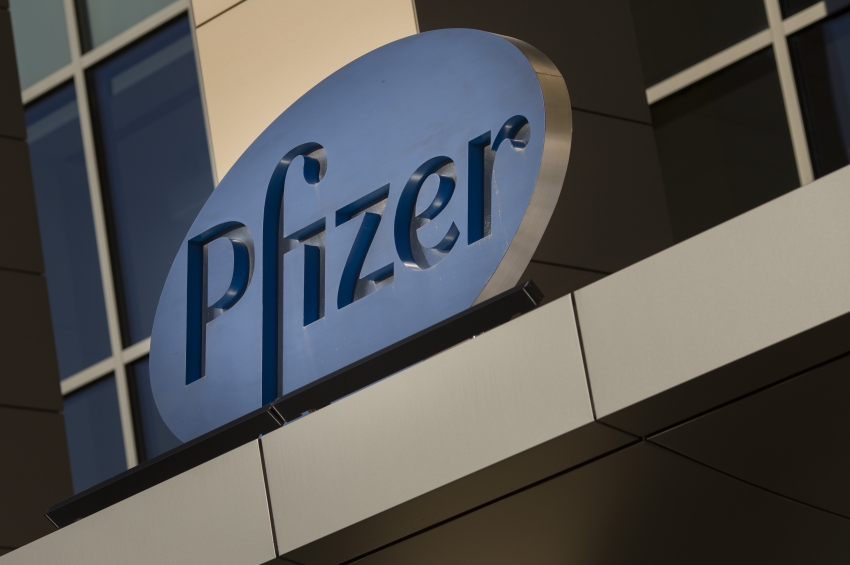 A sign for Pfizer pharmaceutical company is seen on a building in Cambridge, Massachusetts, on March 18, 2017. (DOMINICK REUTER/AFP/Getty Images)

Tax records show that the foundations of well-known corporations are funding settlements that are considered illegal under international law.

The corporate foundations of Verizon, Pfizer, Bank of America, Deutsche Bank, American Express and JPMorgan Chase have collectively given over $25,000 to U.S. nonprofits that send money to Israeli settlements in the occupied West Bank, according to tax records from 2001 to 2016 reviewed by In These Times.

Tax records reviewed by In These Times show that Israeli settlements have a surprising source of funds: the foundations of some of the most well-known U.S. corporations.

In addition, the corporate foundations of Verizon, Pfizer, Deutsche Bank, American Express and JPMorgan Chase have collectively given over $48,000 to Friends of the Israel Defense Forces, a U.S. nonprofit that sends millions of dollars to Israel’s military to support various enrichment activities—like education programs and recreational and cultural centers at army bases for soldiers.

Most of these funds come from corporate donations that match the donations of individual employees, though for some donations—all of Verizon’s and JP Morgan Chase’s in 2005, 2015 and 2016—it is not specified if the payments are matching grants. The corporate foundations encourage employee donations to nonprofits by promising that the companies will match donations to the nonprofits of their choice, doubling the total amount of money that go to those nonprofits.

It’s unclear whether the corporate foundations are aware their money is flowing to Israeli settlements built in defiance of international law. None of the corporations contacted by In These Times about these donations responded to requests for comment.

The vast majority of the donations from these corporations flow to relatively uncontroversial groups, like universities.

Corporations give money to charitable causes to boost their own image, allowing them to portray themselves as altruistic philanthropists rather than rapacious capitalists. Corporations typically fund their own foundations, which gives them an added benefit: a tax deduction.

But the donations to Israeli settlements draw the corporations into perhaps the most controversial conflict in the world, and seem to contradict pledges made by some of these foundations to fund charities that advance social justice and don’t discriminate. “We do not provide funding to any organization that discriminates based on race, religion, color, sex, sexual orientation, gender identity, age, national origin, ancestry, citizenship, veteran, or disability status or espouses hate,” states Bank of America, in a statement on their website explaining what groups their Charitable Foundation Matching Gifts program supports.

Close observers of how settlements fundraise in the United States will notice some familiar names in the tax documents of these corporate foundations. Most of the donations go to large, wealthy organizations that raise the bulk of pro-settler cash in the United States.

The corporate foundations of Verizon, Pfizer, Bank of America, Deutsche Bank, American Express and JPMorgan Chase have together given over $15,000 to the One Israel Fund, a non-profit that gives cash to settlements across the occupied West Bank, including to settler security guards that harass Palestinians and block their freedom of movement. The corporate foundations of Pfizer, American Express and JPMorgan Chase have also given over $6,300 to the Central Fund of Israel, a non-profit that also sends millions of dollars to Israel, including large amounts to West Bank settlements. The Central Fund of Israel has drawn criticism for providing financial support to Honenu, a group that gives money to Israeli Jewish prisoners convicted of abusing or killing Palestinians.

In addition to funding illegal settlements, both the One Israel Fund and the Central Fund of Israel donated to a secretive Israeli government-linked initiative to attack the boycott, divestment and sanctions movement, a global, Palestinian-led campaign calling for an end to Israel’s occupation, the right of return for Palestinian refugees, and equal rights for Palestinian citizens of Israel. According to The Forward, the secretive initiative “will fund information gathering, influence campaigns, [and] pro-Israel advocacy,” though it’s unclear if the program has launched. The One Israel Fund and Central Fund of Israel also fund Im Tirtzu, an far-right Israeli nationalist movement that harasses Israeli leftists.

The corporate foundations have also given to smaller nonprofits that raise money for specific settlements or institutions.

The foundations of Verizon, Deutsche Bank and Pfizer sent nearly $1,500 to the American Friends of Yeshivot Bnei Akiva, a group that raises money for a network of religious Zionist schools across Israel and the occupied West Bank and Golan Heights.

In 2004, the Pfizer foundation gave $500 to American Friends of Bet El Yeshiva Center, a nonprofit run for many years by David Friedman, now the U.S. ambassador to Israel, that supports the settlement of Bet El, which sits deep in the occupied West Bank.

And the corporate foundations of JPMorgan Chase, Pfizer and Verizon have sent nearly $1,000 to the nonprofit American Friends of Elon Moreh, which supports the settlement of Elon Moreh, a community with a reputation for harassing Palestinian farmers.

“Foundations have to take responsibility and ownership over gifts that pass through them, whether through matching funds, donor-led giving, or other methods,” says Rebecca Vilkomerson, executive director of Jewish Voice for Peace, which advocates for Palestinian rights. “Groups that are clearly violating international human rights and international law should not be receiving corporate gifts.”