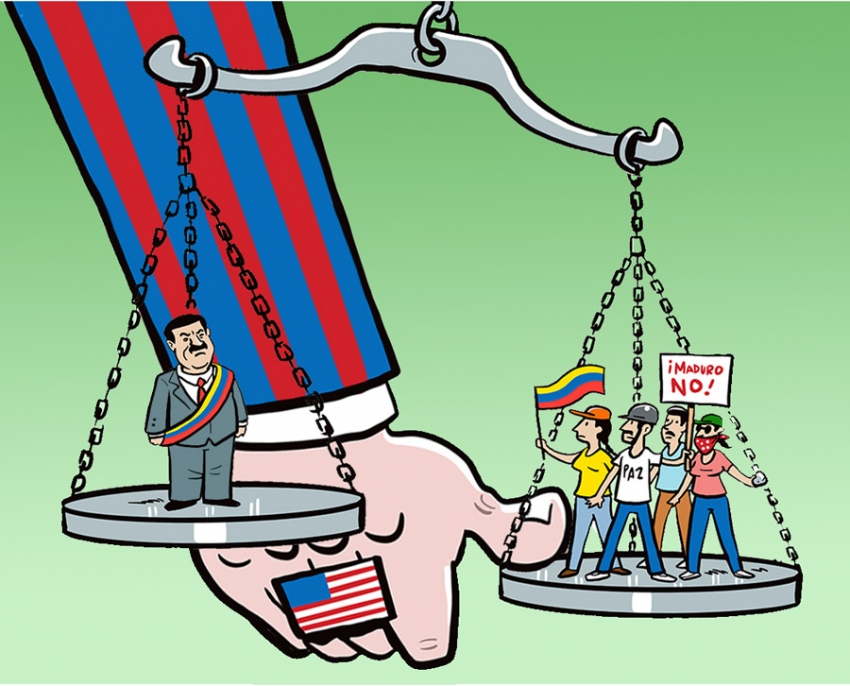 The United States is pushing for regime change in Venezuela. (Terry La Ban)

A Call for Clear Heads on Venezuela: How To Criticize Maduro While Opposing U.S. Regime Change

Working-class Venezuelans have long pushed the chavista government for greater democracy and justice—without ceding ground to the right-wing opposition.

Amid crippling sanctions and threats of military intervention in Venezuela, many have put forward two options: support regime change or support the government of Nicolás Maduro. But this is a false choice. Instead, the U.S. Left can follow the lead of the popular, working-class sectors in Venezuela who have long maintained a complicated relationship to the chavista government.  These movements show that criticism of the government—leftist in name but increasingly prone to corruption and repression—doesn’t mean support for the right-wing U.S.-backed opposition. In fact, healthy critique has been necessary to advance the socialist project.

The scale of Venezuela’s crisis is both undeniable and all-consuming: Hyperinflation has made goods and services inaccessible even to those with dollars; water service is so sparse that weekly calendars are planned around when faucets may run; cooking gas shortages have led some to turn to wood-burning for fuel; public transit is so devastated that commutes have ballooned from minutes to hours; an exodus of millions has sapped the vitality of neighborhoods once teeming with youthful energy. “It’s just too much,” I heard again and again from friends and strangers alike while in Caracas earlier in January.

It wasn’t always so. In 1999 Hugo Chavez swept into the presidency after nearly two decades of growing misery, austerity and state violence. Under the banner of “Bolivarian Revolution,” he promised to make government more responsive to the needs of the poor, crafting a new constitution that promoted participatory democracy and redistributing oil rents in ways that brought major, demonstrable improvements in healthcare, food security, education, transportation and more for millions of Venezuelans once marginalized by the state.

But traditional middle-class and elite sectors, sidelined by chavista governments’ focus on the poor, mounted at-times violent and antidemocratic opposition to Hugo Chávez and, upon his death in 2013, Maduro. This cemented deep class cleavages that have long prevented major popular-sector support for anti-chavismo even amid deep crisis.

Yet popular support for chavismo was never uncomplicated or automatic. Anyone who has spent more than passing time with residents of Venezuela’s sprawling urban barrios can confirm that stinging criticism of the government has long been common. In chavismo’s early years, popular sectors inspired by Chávez’s rhetoric of empowerment demanded follow-through in the form of greater control over state resources, often taking to the streets against state institutions and officials deemed weakly committed to the kind of radical change Chavez increasingly promised. At other times they took to the polls, helping hand Chávez his only electoral defeat in 2007 in a failed constitutional reform that sought to concentrate rather than delegate power.

Following Chávez’s death, Maduro’s election by a razor thin margin emboldened radical sectors of the opposition in 2014 to take up anew violent street protests against the government. At the same time, oil prices collapsed, and the tension between funding social programs and corruption could no longer hold. This limited Maduro’s ability to enact major reforms, leading instead to a siege mentality that increasingly looked inward to state officials and the security apparatus rather than to social movements and popular sectors for support. As the economic crisis took hold in earnest, discontent within working-class quarters rose, leading to significant abstention that gave the opposition control over the national assembly in 2015 and later, to the violent repression not only of opposition protests but of popular sectors, too, under the guise of anti-crime operations. Today, as news reports, polls and my own interviews show, there is a widespread sense that a government once committed to their wellbeing has largely abandoned them, swallowed up by massive webs of corruption, inefficiency and violence.

Recent weeks have exploded these tensions as never before. Corruption, mismanagement, and both existing and new U.S.-imposed sanctions have further deepened Venezuela’s economic crisis, sparking popular-sector protests that the state has met with deadly force, in the process sapping support for Maduro among even in erstwhile chavista areas. At the same time, the United States offers increasingly vocal support for opposition leader Juan Guaidó, who declared himself interim President on January 23, and the Trump administration pushes ever harder for regime change, even threatening military intervention. Once again, Venezuela’s popular sectors are caught between a rock and a hard place.

For progressives abroad, solidarity with Venezuelans requires embracing rather than eliding a complex and fast-moving political landscape—a multi-pronged approach aimed at addressing both the immediate threat and the longer-term barriers to social justice in the country, foreign and domestic. That begins by loudly and unequivocally rejecting U.S. intervention.

Even if the record of U.S. involvement in the region were not sufficiently sordid to sound alarms, the fact that war hawks such as Marco Rubio, John Bolton and Elliott Abrams are helming U.S. policy on Venezuela should confirm that democracy, human rights and humanitarianism are no priority. Military options would prove catastrophic in the short term, as even some opposition sectors begrudgingly admit. They would also scuttle any effort to generate stability in the medium term, laying the grounds for a puppet regime with little credibility beyond its backers domestically and abroad.

But rejecting U.S. intervention must also mean rejecting Nicolás Maduro—lifting up critical popular-sector voices and refusing to feed into discourse that paints him as democratically legitimate, or a true leftist. Not as an empty gesture to “fairness,” but because Maduro’s government has long proven an obstacle to social justice in Venezuela. One of his first policy announcements upon being sworn into a new six-year term in January was a 1 billion Euro plan to “beautify” major cities; this constituted a major affront to the poorest in Venezuela facing medicine, food and currency shortages. Meanwhile, minimum wage increases have immediately been vaporized by a galloping inflation. And though distribution of subsidized food provides some relief, its delivery is sparse and irregular, mired in major webs of corruption. More troubling still is the state repression barrios have increasingly faced at the hands of special police forces ostensibly aiming to combat known criminals, but whose record of extrajudicial killings with impunity sows far more fear than security.

To reject both intervention and Maduro means to support Venezuelans’ right to determine their future free from pressures foreign or domestic. Maduro’s reelection last May was marred by irregularities beyond just the opposition boycott, including media blackouts on the leading challenger, Henri Falcon. But even before, Maduro had already sacrificed what for many was a dearly held legacy of Chávez: electoral legitimacy, first by arbitrarily delaying gubernatorial elections in 2016, then by sidelining grassroots candidates for the National Constituent Assembly in 2017. These moves raise important questions about Maduro’s standing that require resolution by Venezuelans themselves in free and fair elections.

Truly free elections would require a field that includes chavismo, even as Trump and some sectors of Venezuela's opposition might rather eliminate socialism from the political landscape. Solidarity therefore means supporting elections where chavismo and socialist candidates can participate. Fair elections also require lifting international sanctions in order to allow Venezuelans to exercise their right to choose their future without influence from abroad.

To be sure, such a scenario remains distant. And with every passing day, Venezuelans’ suffering grows, now aggravated by harsh U.S. sanctions—with even stronger ones imminent—restricting the Venezuelan government’s ability to raise money for imports, including of food and medical supplies. No one, therefore, should accept U.S. arguments that concern for Venezuela’s humanitarian crisis drives its push to deliver aid to the country, a claim flatly rejected not only by Maduro but also by local and international aid organizations like the Red Cross and Caritas.

Finally, progressives abroad must resist a growing narrative that uses the last five years of economic crisis in Venezuela to retroactively cast the entire chavista project—even socialism itself—as an unmitigated failure, doomed from the start. This ignores the ways that Chavez’s government redistributed income and resources and benefited people’s lives, downplaying why chavismo continues to elicit sympathies and advancing false claim that opposition to Maduro today translates into opposition to chavismo writ large. It also scrubs the record of often violent and anti-democratic opposition, which sought to oust chavismo even when Chavez’s aims were reformist rather than radical in its early years.

There is a pressing need, especially on the Left, to reckon honestly with what went right and wrong in 20 years of chavismo. We must understand how proven gains in poverty reduction, health access, food security and global standing were reversed by a host of factors including overreliance on oil, concentration of power and policies derided even by progressive economists—like currency exchange controls and gasoline subsidies—that ultimately had less to do with socialism or anti-imperialism than with fueling corruption. But doing so effectively begins by resisting efforts to cast this process as preordained, and instead to draw lessons—positive and negative—from two decades of left-wing governance.

While Maduro and his international allies constitute a bulwark against the pretensions of the United States and its domestic partners, progressives abroad must embrace the criticism of those who have struggled often with, at other times against, the government of Maduro in pursuing a better Venezuela. The future of a truly just Venezuela hangs in the balance.

Alejandro Velasco is an associate professor of Latin American history at New York University, and author of Barrio Rising: Urban Popular Politics and the Making of Modern Venezuela.