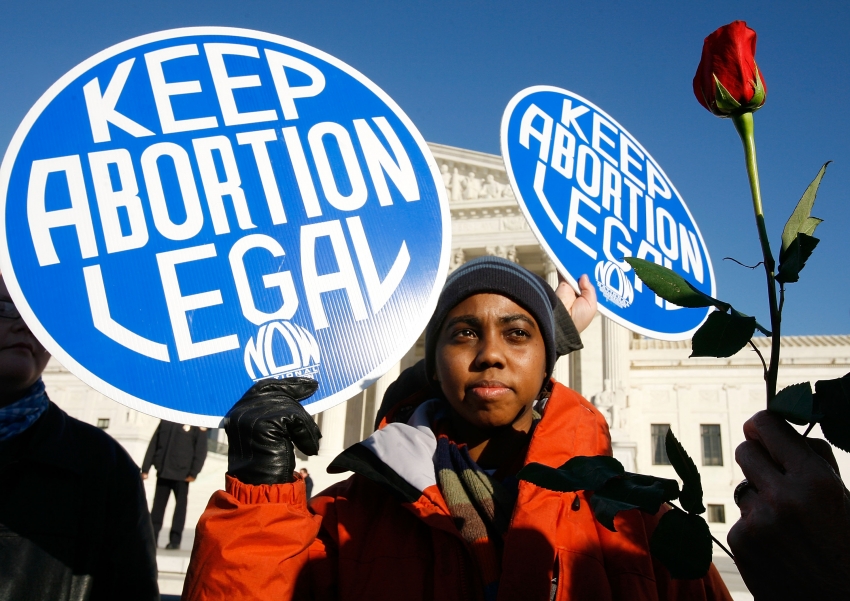 Abortion is a right, and it should be treated that way. (Photo by Alex Wong/Getty Images)

We shouldn’t use worst-case scenarios to justify later abortions. We should defend them unequivocally.

Relying on personal stories to appeal to the moral and empathetic senses of others, particularly those of the opposition, is a weak political strategy that abandons the principles of bodily autonomy and the right to private decision making.

In January, New York Gov. Andrew Cuomo signed the Reproductive Health Act (RHA), a bill expanding access to abortion after 24-weeks (the previous limit) in circumstances in which the fetus would not survive the pregnancy or if the mother’s health is at risk. The passage of the legislation has since inspired troubling rhetoric from both sides of the abortion war.

In his State of the Union address in January, President Trump used provocative imagery to intensify heinous mischaracterizations of women who have abortions further along in their pregnancies, saying the procedure involves ripping a baby from a mother’s womb, minutes before birth. (It does not.)

To refute such accusations, abortion rights advocates have taken to outlets such as the Guardian, USA Today and the Cut to tell the stories of women who have had later abortions. Such stories often foreground how much women wanted their pregnancies, and the agony surrounding their decision to terminate them, implying that no woman simply chooses to have a later abortion. The decision, such narratives suggest, is made only because something has gone horribly wrong with the pregnancy.

This rhetorical response, frequently coming from members of the mainstream pro-choice movement, should be of concern to anyone fighting to protect and expand abortion access. Such defensive language inadvertently stigmatizes women who have later abortions, while also entrenching a culture in which women must justify decisions about our bodies. By shifting the case for later abortion onto the terrain of moral arguments—focusing on the most personally grim of situations in an attempt to elicit sympathy—we cede ground to the anti-choice movement. Put simply, this defense of later abortions makes them harder to defend.

On the surface, these stories may seem to serve as an effective response to the anti-choice movement’s distortions and lies. Detailing the concrete motivations behind an individual’s decision forces readers to understand the choice to seek an abortion on a moral level, challenging preconceived notions. Such stories can also provide comfort for women who have lived for years in silent shame about their experiences.

However, relying on personal stories to appeal to the moral and empathetic senses of others, particularly those of the opposition, is a weak political strategy that abandons the principles of bodily autonomy and the right to private decision making. The emphasis placed on the rarity of later abortions or the extreme circumstances in which they become necessary tacitly characterizes later abortions as inherently abhorrent, acceptable only in uniquely dire situations. Such concessions severely imperil the ability of the pro-choice movement to fight back against the unsparing and steady restrictions being placed on abortions across the country.

The recent rhetorical defense of later abortions undermines the movement’s more robust defense of abortions that happen earlier in pregnancy. Beginning in the 1960s, abortion advocates issued an uncompromising call for “abortion on demand without apology” as they protested, sat-in and fought for reproductive rights, which would eventually be enshrined by the passage of Roe v Wade. Yet by the 1990s, with social conservatism on the rise, the Clinton administration—which was ostensibly pro-choice—walked back the case for abortion to the framework of “safe, legal, and rare.”

For years, politicians talked only about reducing the number of abortions. Given the inability of the Democratic Party to fully defend and expand abortion rights, it’s unsurprising that in 2005, Hillary Clinton acknowledged the Democrats’ and Republicans’ mutual interest in decreasing abortion rates, remarking that abortion “represents a sad, even tragic choice to many, many women,” and that “the best way to reduce the number of abortions is to reduce the number of unwanted pregnancies in the first place.”

The stigmatizing framework has not gone unchallenged. In Re-thinking the Mantra ‘Safe, Legal and Rare, Tracy A. Weitz, founder of Advancing Standards in Reproductive Health (ANSIRH), writes that the term “rare” creates an “immediate normative judgment on abortion.” It suggests, she says, that “there are some abortions which should and should not occur.” Instead, Weitz claims that a more sound defense of abortion rights requires demands for increased access to the procedure and an articulation of abortion as a social good.

In recent years, social media campaigns such as Shout Your Abortion and We Testify have aimed to reduce the secrecy and shame around such a common procedure. Many advocates have switched out the “rare” framework for “safe, legal and accessible.” Some advocates go a step further, returning to “abortion on demand without apology,” picking up the mantle of the women’s liberation movement for another generation. Now there are countless stigma-busting stories from women who say “I don’t regret my abortion,” or “my abortion was empowering.”

This sort of positive messaging stands in stark contrast to the narratives around later abortions which typically frame the decision as a distressing last resort. On social media, you will frequently find declarations from pro-choice advocates that make claims like “no sane woman would just have an abortion so late” or “this is the hardest decision a woman will have to make.” Such statements read like admonitions that these types of abortions should be avoided at all costs. They also reveal deeply held assumptions that women’s biological destiny is to serve as mothers and nurturers. It seems the movement only acknowledges the need for later abortion access insofar as women have compelling reasons for termination, such as trauma or severe health risk. Otherwise, the procedure is frequently considered unthinkable. Yet a host of other reasons for choosing an abortion could be at play, from financial precarity resulting from job loss to having an abusive partner. These rationales should be considered just as valid, and women—as arbiters of their bodies—should be the ones making the choices about their pregnancies, no matter the grounds.

Given the antipathy many Americans feel towards later abortions, this perspective is not unreasonable. As a pregnancy nears or passes the point of viability, support for abortions drops to a staggering 14 percent. As such, it’s understandable that people may need stories to help them weigh their moral objections to later abortions against the potential harms created by the inability to access one.

In her book Scarlet A: The Ethics, Law, & Politics of Ordinary Abortion, Northwestern University Professor of Law and Ethics Katie Watson argues for having a more rigorous conversation about our values surrounding abortion. Crucially, Watson explains that “We should be able to acknowledge the complexity of private decision making without threatening the right of private decision making.” The case for bodily autonomy is one that demands we not give certain of our own moral judgments about the choices of others—whatever they might be—over to the force of law.

Yet by circulating narratives which frame later abortion only in the context of obligation or agony, we fall into the trap of defending later abortions only in terms of the “compelling reasons” for them—lethal genetic anomalies, threats to maternal health, rape or incest. This approach implies that there are also invalid reasons, which cannot justify later abortions. But this is dangerous territory.

What counts as a “compelling reason” is not carved in stone tablets—it’s constructed and reconstructed in the realm of politics. There are no guarantees that the reasons pro-choice advocates deem “compelling” will ensure access to later abortions, and a powerful anti-choice establishment can successfully narrow down the range of acceptable reasons to get one.

Nowhere is this clearer than in the very responses to New York’s. A recent op-ed in the conservative outlet the Federalist suggests the authors would rather a woman give birth to a fatally ill baby, and watch it die in perinatal hospice care, than for her to have an abortion. Who can forget former Missouri Rep. Todd Akin who in 2012 remarked that abortions are unnecessary since, in the case of ‘legitimate rape,’ “the female body has ways to try to shut that whole thing down”? Or former Missouri State Rep. Tila Hubrecht, who who referred to pregnancies conceived by rape as “silver linings”? With numerous heartbeat bills and copycat six-week abortion bans popping up across the country, the opposition’s agenda is clear: a total ban on all abortions.

Insisting on cases of extreme and rare need as a prerequisite for obtaining a later abortion further destabilizes abortion access, which is already seen not as a right to which women are entitled, but a right that women must earn through excessive vulnerability and public suffering. Such an approach only serves to reinforce the perception of women as incompetent agents of our own futures.

For far too long, the mainstream pro-choice movement has become inured to the arbitrary legal limitations set on abortion, and the moral attacks made by the opposition. Women who have later abortions deserve more than backhanded support from choice advocates. It’s time we re-ground abortion in a larger political assertion of women’s bodily autonomy: We are the ultimate arbiters of our bodies.