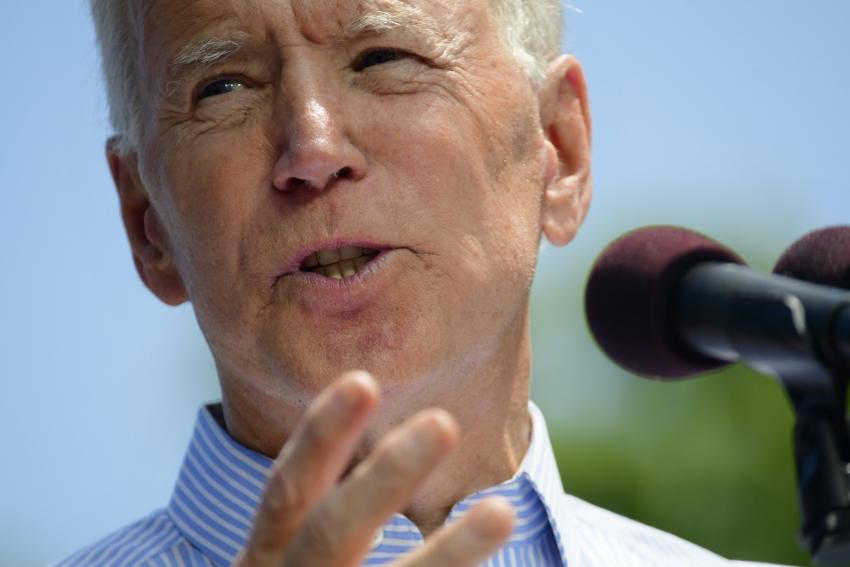 Former Vice President Joe Biden kicks off his campaign for the 2020 US election at a rally in Philadelphia, Pennsylvania on May 18, 2019. (Photo by Bastiaan Slabbers/NurPhoto via Getty Images)

Stuart Eizenstat has worked as a powerful political advisor, as well as a corporate lobbyist for the oil and arms industries.

For Raytheon in 2015, Eizenstat lobbied the U.S. on Poland’s missile defense system.

Stuart Eizenstat, a long-time player in Democratic politics, is advising Joe Biden’s presidential campaign. Eizenstat told Politico he “planned to advise the campaign on foreign policy,” according to journalist Theodoric Meyer, and Eizenstat also confirmed the position via email to In These Times. The former Vice President has made attempts to publicly distance himself from lobbyists, but Eizenstat has worked as both a powerful political adviser and corporate lobbyist, representing weapons sellers and fossil fuel companies to the government.

Eizenstat was chief White House domestic policy adviser to President Jimmy Carter, ambassador to the European Union and Deputy Secretary of the Treasury in the Bill Clinton administration, and Special Adviser on Holocaust Issues during the Barack Obama administration. He has cashed in on this public sector experience with corporate clients. As a lawyer and lobbyist at the firm Covington & Burling, Eizenstat has represented fossil fuel companies Shell, BP and Noble Energy, as well as defense contractors Caterpillar, Raytheon, BAE Systems, Boeing and the notorious private security firm Blackwater.

On a panel at the AIPAC conference on March 24, Eizenstat called BDS “a wolf in sheep’s clothing.” He said, “The BDS movement’s main threat, in my opinion, is not that it will hamper U.S. investment in Israel. It’s not that it will hamper bilateral trade. It is that it will erode support for Israel by painting Israel as a colonial country, an oppressor, and it will peel away public support in Europe and in the United States.”

Eizenstat added that the anti-BDS legislation “is very careful to say it does not preclude any company, any individual from criticizing Israeli policy. Don’t like the settlements? You can say so. There’s no bar on it. It only bars commercial implementation … it has nothing to do with free speech.”

Many speakers at AIPAC have uniform talking points, and one of them is criticism of the BDS movement. The narrative that Israel is under attack from all sides has been used to undermine—and criminalize—people concerned about the human rights of Palestinians. At AIPAC in 2016, Biden said, “We will continue to push back against the cause here in the United States for people to boycott, disinvest or sanction Israel.”

The Biden campaign did not respond to a request for comment from In These Times.

In 2012, Eizenstat lobbied Congress and the Obama administration for Caterpillar on “U.S. government relations regarding a report by the United Nations' Special Rapporteur for the Palestinian Territories,” according to lobbying disclosures. Caterpillar sells bulldozers to Israel that the country uses to kill Palestinians and demolish their homes. At the time, the UN was conducting an investigation into Israeli settlements and voted to recognize Palestine as a sovereign state. An independent UN expert called for a boycott on companies profiting from settlements, including Caterpillar.

While Eizenstat did not disclose his Caterpillar work at the recent AIPAC conference, he did mention lobbying for another U.S. company doing business in Israel: Noble Energy, a Texas oil company. In 2011, Eizenstat lobbied on taxes for drilling for natural gas in the Mediterranean, according to lobbying filings.

“One of the great natural gas finds in the world is found off of the Israeli Mediterranean,” he told the AIPAC audience. “And yet, except for Noble, there are very few other American companies that are willing to contest and try to get bids for that implicitly because they’re concerned with the impact that it would have in their doing business with the Arab countries.”

Eizenstat declined to answer follow-up questions from In These Times.

At AIPAC, months after the deadliest attack on Jews in U.S. history at the Tree of Life Synagogue in Pittsburgh, Eizenstat baselessly pinned anti-Semitism on Muslims and the left.

Eizenstat described anti-Semitism as “part of the BDS effort,” and also downplayed the threat of white supremacist violence in the U.S. “We live in a dreamland over here,” he said. “I mean, okay, we have the Tree of Life synagogue and so forth, but we have nothing like [what] one billion European Jews are facing with 15 million Muslims. A small percentage, but a very hard core who are part of this whole BDS thing are doing this. It’s frightening. It’s really frightening.”

In private emails from 2015 released by WikiLeaks, Eizenstat characterized the BDS movement differently: “Their ability to get supporters on U.S. campuses and in European public opinion and EU foreign ministers (e.g. labeling West Bank products) comes not from anti-Israel or anti-Semitic views, but because of sincere concerns with Israeli settlement policy,” he wrote to Hillary Clinton’s chief foreign policy advisor, Jake Sullivan.

For Raytheon in 2015, Eizenstat lobbied the U.S. on Poland’s missile defense system. In 2010, he represented the private security company formerly called Blackwater, then called Xe, now called Academi, on government contracts. The company was under scrutiny from the Senate over actions in Iraq and Afghanistan. Two soldiers working for Paravant, a shell company of Blackwater and a Raytheon subcontractor, killed two Afghan civilians in 2009.

Investigative reporter Jeremy Scahill wrote in 2010 about the company’s relationship with the government, “What we are seeing clearly is the Obama administration not only using Blackwater in sensitive operations globally, but actively defending the company’s continued existence as a government contractor in good standing.”

Biden's new slogan—“Not You. Not Me. But We.”—sounds similar to the Bernie Sanders (I-Vt.) campaign’s slogan: “Not me. Us.” Biden is running in a Democratic field where candidates are being encouraged by activists to avoid corporate cash. His adviser, Eizenstat, a Democratic darling of fossil fuel companies and defense contractors, has made his career doing just the opposite.

Naomi LaChance is a freelance journalist covering influence and corruption from Washington, D.C.