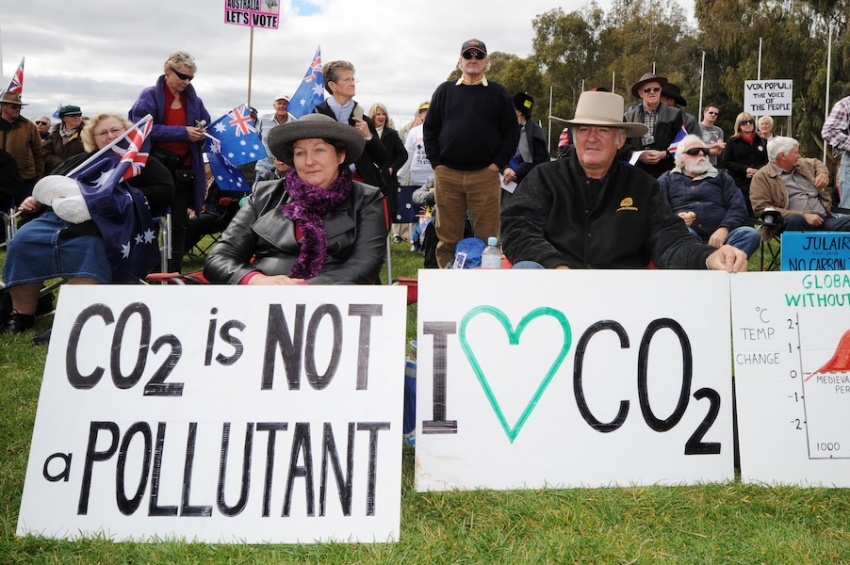 I Went to a Climate Change Denial Conference. It Made Even Less Sense Than You’d Think.

Panelists at the Heartland Institute’s Thursday gathering agree you should stop worrying about climate change. They just can’t agree on why.

Panelists argued that the fossil fuel industry is under unfair attack, while the Green New Deal is a totalitarian communist plot to steal American liberties and cast the world into “energy poverty.”

There’s no need to worry about reducing the greenhouse gases driving climate change—all that carbon dioxide is actually “greening the planet.” The Green New Deal, on the other hand, would send the country back to the stone age, or at least the pre-industrial era. Those were among the eye-popping and often-conflicting views expressed yesterday at the Heartland Institute’s 13th International Climate Change Conference, a gathering of climate change deniers that took place at the Trump Hotel in Washington, D.C., just blocks from the White House.

The vast majority of the world’s climate scientists agree that climate change could prove devastating to life as we know it unless we take swift and sweeping action to decarbonize the economy . But those “wild predictions have been pronouncedly exaggerated,” according to the British gadfly Lord Christopher Monckton, who holds the title 3rd Viscount Monckton of Brenchley.

One of the more colorful figures in the climate denial universe, Monckton ticked off a list of problems scientists have linked to climate change that Monckton says we really don’t need to worry about. According to him, the world is seeing less, not more, drought; sea levels are falling not rising; forest fires are causing less damage; hurricane activity is decreasing, too; and carbon dioxide is actually improving the global environment by “greening” places like Australia’s Great Sandy Desert. “That’s why we need more CO2, because it greens the planet,” he declared.

Other conference panelists joined Monckton in cycling through a series of theories long debunked by peer-reviewed science. Some believe, like Monckton, that carbon dioxide levels in the atmosphere are growing but provide more benefits than threats. (One Heritage Foundation official went so far as to suggest carbon dioxide emitters should get paid a subsidy rather than face the kind of carbon tax scheme policymakers have discussed; of course, the oil industry already does receive billions in subsidies.) Others argued that CO2 levels are in fact not rising, while still others say we should be more concerned about a coming ice age.

“The real problem is we have a lot more to worry about with global cooling than with global warming,” said Rodger Bezdek, an energy analyst and Heartland policy advisor.

If the speakers and audience members don’t all agree on why we shouldn’t worry about climate change, the few hundred people assembled in a hotel ballroom yesterday do share a number of other ideas: chiefly, that the fossil fuel industry is under unfair attack and deserves public support, while the Green New Deal is a totalitarian communist plot to steal American liberties and cast the world into “energy poverty.”

Kevin D. Dayaratna, a senior statistician at the Heritage Foundation, told the audience the Left had already begun to take control of the country and would continue its authoritarian advance with a Green New Deal.

On the surface, times would seem to be good for Heartland and the climate change denial movement, with the world’s most prominent climate change denier living in the White House. President Donald Trump has run with many of this group’s longtime demands such as withdrawing the United States from the United Nations’ Paris climate accord and rolling back Obama-era pollution rules.

But the evidence has never been stronger that climate change is already happening and will have increasingly catastrophic impacts on human civilization (not to mention other species) unless the world takes action. Meanwhile, the surprisingly fierce rise of children activists demanding climate action has boosted public concern worldwide and helped sweep progressive politicians supporting a Green New Deal into U.S. Congress.

This may be part of why climate denialists (who prefer to be called “climate realists”) appear to be struggling to remain relevant and attract younger followers. Yesterday’s speakers and audience members were overwhelmingly old, white and male. After the first panel session, there were so many white-haired men waiting for the men’s room that a long line snaked out the door, past the gold-plated trash bins embossed with the Trump name. The line for the women’s room, by contrast, was significantly shorter.

To recruit younger generations, one audience member suggested warning them that Green New Deal supporters want to take their iPhones away and return the country to a time before electricity—never mind that electricity, in the form of solar and wind, is central to the Green New Deal proposal. (Of course, panelists and audiences expressed extreme skepticism about renewables, as well.)

Not only does the climate denial movement appear in danger of aging out, raising funds is getting more difficult. Traditionally funded by fossil fuel companies, Heartland’s oil and gas money has dried up in recent years as the scientific consensus around climate change has grown stronger, putting oil and gas companies under pressure from shareholders and the public to stop funding groups that deny the problem.

Earlier this year the libertarian Cato Institute disbanded its climate denial program, the Center for the Study of Science. And yesterday’s Heartland conference had fewer than half the number of speakers and panelists as its first International Climate Change Conference in 2008. The number of sponsoring organizations has also fallen by more than half since 2008.

Despite these developments, climate change denialism continues to get more than its fair share of media coverage, according to an analysis by the Public Citizen published Wednesday to coincide with the conference. The nonprofit consumer advocacy organization found that media coverage of climate denial by Heartland, Heritage and three other think tanks increased from 2014 to 2018.

“The mounds of scientific evidence … should lead to a radical decline in the influence of climate deniers in the media,” Allison Fisher, outreach program director for Public Citizen’s climate program, said in a press release. “Amazingly, coverage of the deniers’ messages has risen over the past five years as the climate crisis has worsened, with much of it being uncritical.”

It seems possible to conceive of a time, not all that far off in the future, when the effects of climate change will become so evident and frequent that denying it’s happening will no longer be an option. But that’s hardly a comforting thought.