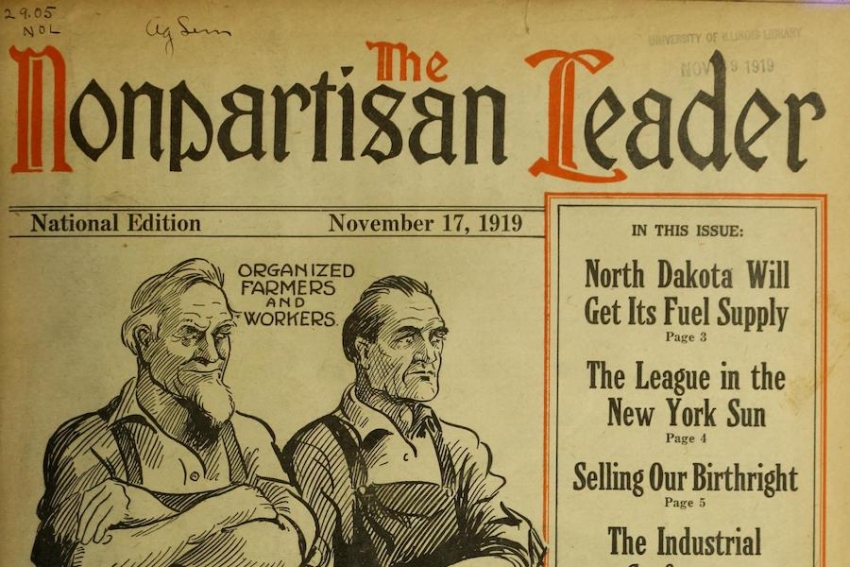 In the years since the financial crisis, vibrant campaigns for public banks have emerged all across the country.

One hundred years ago July 28, a bank in Bismarck, N.D., opened its doors for the very first time. This would have been an unremarkable event, likely lost to history, except for the fact that it was a public bank, owned by all the residents of the state. A century on, the Bank of North Dakota (BND) is still the only publicly owned bank in the continental United States (a second public bank was recently established in American Samoa)—though potentially not for long.

The BND is enjoying renewed time in the limelight as activists look to the institution as an example of how to regain democratic control over finance, and in the process confront a myriad of pressing problems from the climate crisis to gentrification. Rather than having public funds be extracted from local communities to fuel Wall Street speculation, public banks can ensure that those funds are used to stabilize local economies and support local public priorities. As Ellen Brown, chair of the Public Banking Institute, writes in her new book, Banking on the People, “a public banking system … can fund the goods, services and infrastructure required to satisfy the needs of the people and the economy without unsustainable debt, taxation or environmental degradation.”*

That a public bank is resonating with people across the United States today shouldn’t be surprising. If we look back at the conditions that led a diverse group of farmers, socialists and populists to struggle against the odds to create the BND in the first place—corporate domination, an economy hobbled by debt burdens, gaping inequalities, ineffective reformists, bought politicians —we find they are remarkably similar to those we face today in our new “gilded age.”

At the dawn of the 20th century, the remote and relatively new state of North Dakota was firmly under the control of corporate interests. Heavily indebted small farmers and small businesspeople were beholden to terms set by out-of-state railroad companies and grain monopolies (both backed by big corporate banks) in order to access broader markets. The railroads in particular (which owned vast swathes of land in the state) were pernicious tax avoiders, depriving the government of desperately needed development funds. The state government was easily captured by these powerful interests and was, for a time, essentially under the control of a corrupt former railroad agent named Alexander McKenzie and the Republican political machine he ran. Early activist efforts to break this political and economic stranglehold through regulation and legal action were undermined by threatened capital strikes (for example, corporate owners threatened to close their grain elevators when faced with regulation in 1891).  Ultimately, these reform efforts had no answer to the central problem: that the large corporations of the day had the power to dictate economic conditions and relationships and the state lacked the financial means to advance alternatives.

In 1915, former Socialist Party organizer and flax farmer Arthur C. Townley formed the Nonpartisan League (NPL), which, among other things, advocated for worker’s compensation, a graduated state income tax, and public ownership of banks, mills, warehouses, insurance programs and other enterprises as a way of wresting economic power from the corporations. Buoyed by widespread support among farmers, NPL-backed candidates won elections in 1916 and 1918, gaining control of the state legislature and governorship. Once in office, they began to implement their radical yet popular economic agenda.

In July 1919, the BND was launched with $2 million in capital and a requirement that all state and local government funds be deposited in the bank. With these funds and popular support, the BND was able to endure an early Wall Street counterattack, namely a boycott of the state’s bonds. The BND survived, and ultimately thrived, despite the fact that the NPL was not able to withstand the political reaction to its success. Opponents organized the Independent Voters Association, a corporate-funded effort that hoped to see the experiment dashed, declaring during the 1920 race that “the real issue in the campaign in the state is between Americanism and socialism.” NPL candidates lost control of the lower house of the legislature after those elections, the new lawmakers passed measures undermining NPL policies and governor Lynn Frazier was narrowly recalled in 1921.

While the NPL’s political fortunes revived during the depression of the 1930s and the party exists to this day as part of the state’s official Democratic Party affiliate, the important lesson for activists today is how successful, popular and ultimately resilient institutions like the BND (and the accompanying publicly owned grain mill and elevator) became once they were established.

Between 1919 and 1933 the BND lent almost $41 million to more than 16,000 farmers in the state, and during the Great Depression the bank helped the state uniquely sustain itself and recover quickly (foreshadowing similar success in helping the state withstand the 2008/09 financial crisis). While school teachers across the country were being paid essentially in IOUs that were typically redeemed with a 15% loss, the BND was able to pay them in full. In the 1940s, farmland that was foreclosed on during the Depression was sold back, in many cases, to the same families that lost them.

In 1945, the bank began to return a portion of its profits to North Dakota’s general fund—the first of more than $1 billion total that has been returned to the state over the decades, helping to fund various state services. In 1967 it made its first federally insured student loan, and today the bank administers its own student loan program that provides North Dakota residents (and those attending North Dakota colleges) with a variety of benefits (including low/competitive interest rates, no fees and refinancing options after college). Today, BND may not be the socialist engine many NPL planners had in mind (it works with rather than competes with or displaces private sector banks, for instance), but it is, as Gov. William Guy (D-NPL) advocated for in the 1960s, an “engine for economic development” in the public interest. Last year, BND reported $159 million in net earnings, with a total $7 billion in assets and a loan portfolio of $4.5 billion.

While the Bank of North Dakota’s record is impressive, it is important not to lose perspective. As a public institution, it is ultimately accountable to the democratic institutions of the state, a state that has changed considerably in the past 100 years and is now dominated by the Republican Party politically and increasingly by the oil and gas industry economically. Recently, the BND was widely, and rightly, criticized for lending the state as much as $10 million to cover the costs of policing the American Indian-led Standing Rock protests against the Dakota Access Pipeline.

Yet despite these risks, it is this promise of democratic control of finance that is most appealing to today’s activists.

In the years since the financial crisis, vibrant campaigns for public banks have emerged all across the country, seeking to resist corporate domination and elite control and build new, more equitable and sustainable institutions. Some of the most advanced campaigns are in California. Following a 2018 referendum loss in Los Angeles (where 42%—nearly half a million people—voted in favor of a public bank), activists have taken their fight to the state legislature. Recently, a statewide bill to clear some roadblocks for the establishment of local and regional public banks passed the General Assembly and has moved on to the State Senate (where it passed two key committees in June and July).

Whatever the bill’s ultimate fate, the campaign that the California Public Banking Alliance has put together is truly remarkable. More than 100 organizations representing 3.3 million Californians have endorsed the bill. These include labor unions (such as the California Nurses Association, SEIU California, AFSCME California and UFCW Western States Council), community groups (such as People Organizing To Demand Environmental and Economic Rights and Healthcare for All- California), environmental groups (such as 350.org, Friends of the Earth and the Local Clean Energy Alliance) and political organizations (such as the California Democratic Party and the Green Party of California). Moreover, 10 city governments have backed the effort, including Los Angeles, San Francisco, Oakland, and San Diego.

In California and elsewhere in the country, public banking has very quickly moved from a fringe interest to a mainstream political issue. This is testament to both the long-term success of examples like the Bank of North Dakota and to the efforts of a new generation of activists and movement builders who, like their predecessors 100 years ago, understand how critically important control of finance and capital is to the hope of building a more equitable, just and democratic world.